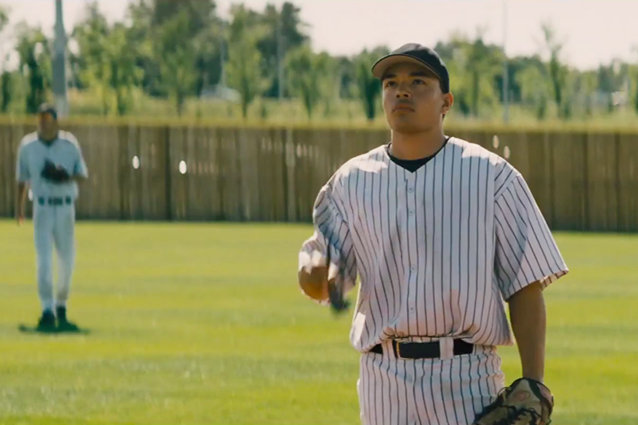 [quote]IMAX is proud to partner with CAA, MLBAM, NBHOFM, GSP and Tom Werner to provide this incredible, cutting-edge experience to fans of the National Pastime throughout the country.   Baseball has always been about breaking new ground while honoring the past and we could not be happier to have IMAX’s innovative technology immerse fans into the game and give them an opportunity to relive their dreams while building new ones.” — Greg Foster, Sr. EVP IMAX Corp. and CEO IMAX Entertainment[/quote]

New York, NY, USA — The National Baseball Hall of Fame and Museum (NBHOFM), IMAX Corporation (IMAX), MLB Advanced Media (MLBAM), in partnership with Boston Red Sox Chairman Tom Werner and leading entertainment and sports agency Creative Artists Agency (CAA), are bringing baseball history together with cutting-edge technology and digital media to create the ultimate fan experience in Major League cities beginning in Spring 2016.  The announcement of the tour, which will be led by Arny Granat and Grand Slam Productions (GSP), was made in celebration of the Hall of Fame’s 75th anniversary.

To celebrate the passion and love that fans have for the sport, one-of-a-kind historical artifacts from the vast collections of the museum in Cooperstown, New York, will be curated and exhibited in unprecedented ways.  This dynamic state-of-the-art exhibit will allow fans to “experience” baseball like never before.  Ensuring it reaches as many baseball fans as possible, the tour will visit Major League cities and Spring Training camps as well.

Central to the fan experience is a mobile IMAX theater showcasing an original IMAX film highlighting the past, present and future of baseball. The film will feature never-before-seen new content as well as historical footage.

The tour will consist of interactive exhibits representing different facets of the game of baseball. The latest technologies will be used to provide an engaging experience and literally “bring the game to life.” The exhibit will showcase Hall of Fame artifacts from the past through the present and into the future through a complete sensory immersion designed to entertain, inform and delight. Baseball historians will serve as curators for the exhibit.

Some cutting-edge features in development include:

“We are so excited to bring selected Cooperstown treasures to baseball fans across the country,” said Hall of Fame Chairman Jane Forbes Clark.  “Fans visiting this experience will be completely immersed in the game’s history, thanks to the creative influence of MLBAM and IMAX, two leaders in technology and entertainment.”

“By marrying the best of baseball with an immersive, state-of-the-art experience, we have an opportunity to expand the fan experience beyond the ballpark and into the communities in which our fans live, as well as ignite a passion for the game with a new generation,” said Tom Werner.

“As someone who grew up nearly 1,000 miles from Cooperstown, I commend the NBHOFM for conceiving of and implementing this fan-focused tour,” said Bob Bowman, President & CEO, MLBAM. “We are excited to support such a prestigious partnership, providing new technologies, along with IMAX, to help deliver interactive experiences featuring the game’s greatest players, narratives and traditions.”

Established in June 2000 following a unanimous vote by the 30 Major League Baseball club owners to centralize all of Baseball’s Internet operations, MLB Advanced Media LP (MLBAM) is the interactive media and internet company of Major League Baseball. MLBAM manages the official league site, MLB.com, and each of the 30 individual Club sites to create the most comprehensive Major League Baseball resource on the Internet. MLBAM also develops, deploys and distributes the highest-grossing sports app, At Bat, as well as manages live video content for dozens of sports and entertainment clients. It captures, encodes and distributes tens of thousands of live video events annually, powering more live events on the Internet than any other property in the world.

American television producer and businessman, chairman of the Boston Red Sox and Liverpool Football Club. Werner is a co-founder of The Carsey-Werner Company. In this capacity, he served as executive producer of such television programs as The Cosby Show, Roseanne, 3rd Rock from the Sun and That 70’s Show and in 1996, he was inducted into the Television Hall of Fame. Werner is co-Managing Partner with his friend John Henry in the sports investment and operations company New England Sports Ventures.

Arny Granat co-founded Jam Productions, Ltd. in 1971. Jam Productions is one of the largest independent concert promoters in North America and has promoted a wide array of events over the past 40 years including the Rolling Stones, Madonna, Frank Sinatra as well as producing the first Farm Aid concert. Through the corporate special events division , they have produced such events as the Grand Opening of Millennium Park in Chicago, three Gubernatorial inaugurations and the World Cup ’94 Chairman’s Opening Night Gala. Mr. Granat has expanded his range of entertainment into the theatrical world thru Jam Theatricals, producing plays in 30 markets around the U.S. and Canada while winning several Tony Awards as a producer on Broadway. Among Granat’s many achievements in the music industry is being named Pollstar’s Talent Buyer of the Year and Performance Magazine Readers Poll Promoter of the Year.

Joe Kleimanhttp://wwww.themedreality.com
Raised in San Diego on theme parks, zoos, and IMAX films, InPark's Senior Correspondent Joe Kleiman would expand his childhood loves into two decades as a projectionist and theater director within the giant screen industry. In addition to his work in commercial and museum operations, Joe has volunteered his time to animal husbandry at leading facilities in California and Texas and has played a leading management role for a number of performing arts companies. Joe previously served as News Editor and has remained a contributing author to InPark Magazine since 2011. HIs writing has also appeared in Sound & Communications, LF Examiner, Jim Hill Media, The Planetarian, Behind the Thrills, and MiceChat His blog, ThemedReality.com takes an unconventional look at the attractions industry. Follow on twitter @ThemesRenewed Joe lives in Sacramento, California with his wife, dog, and a ghost.
Share
Facebook
Twitter
Linkedin
Email
Print
WhatsApp
Pinterest
ReddIt
Tumblr
Previous articleAlien vs Predator Chestbursts out of the Screen and Into the Reality of Halloween Horror Nights
Next articleSCISS Installing Colorspace 4K Digital Dome at Malta’s National Interactive Science Center