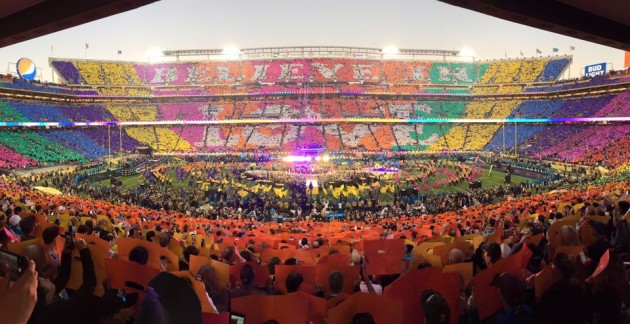 Prelite’s Tom Thompson configured a Prelite system at PRG in Los Angeles where the lighting team worked for a week before setting up Prelite on site. This year they were challenged by the daylight-into-sunset timing of the Halftime Show, which made things much more complex from a lighting standpoint.

“There was a 45-50 minute pocket where the show might hit, and it actually hit going into sunset – an extremely difficult time for lighting conditions,” says Barnhart.  The show began at 130 footcandles of ambient light in the sky and went down to about 45 during the course of the 12-minute show.

“Prelite allowed us to see realistic virtual daylight conditions and not be seduced by the darkness we usually have for the show but weren’t going to have this time,” explains Grill.  “After we confirmed that our ideas worked in the venue, Pete (Radice) could fine tune things with Prelite on site without having to work live with the rig.”  Prelite also gave the team the opportunity to show the guest artists how their lighting would look prior to the show.

“Every year Prelite delivers a better experience for us,” Radice reports.  “Our time on the field is so limited, especially when it’s a real grass field.  With Prelite we were able to have the cues written and everything ready to go so we could plug in then do tune ups on the field.  We weren’t starting from scratch.  While there are always creative changes to the show at the last minute, getting a leg up with Prelite made them easier to deal with.”

“Prelite’s modus operandi is figuring out the best solution for the challenge at hand,” says Thompson.  “MA 3D offers excellent performance but only works with a grandMA console.  So we did some testing in December to prove our theory for getting MA 3D to work on a V676 with exponentially better performance than any other visualizer.

“We used WYSIWYG to test the functionality of how fixtures worked in MA 3D and checked our theory using Art-Net,” he explains.  “The V676 console output Art-Net into a computer running MA on PC.  That translated Art-Net into MAnet and that went into another machine with MA 3D. During testing, we were running 30 universes of data, concurrently, at 14 fps.  No other visualizer delivers that kind of performance.  It was a seamless solution.”

Joe Kleimanhttp://wwww.themedreality.com
Raised in San Diego on theme parks, zoos, and IMAX films, InPark's Senior Correspondent Joe Kleiman would expand his childhood loves into two decades as a projectionist and theater director within the giant screen industry. In addition to his work in commercial and museum operations, Joe has volunteered his time to animal husbandry at leading facilities in California and Texas and has played a leading management role for a number of performing arts companies. Joe previously served as News Editor and has remained a contributing author to InPark Magazine since 2011. HIs writing has also appeared in Sound & Communications, LF Examiner, Jim Hill Media, The Planetarian, Behind the Thrills, and MiceChat His blog, ThemedReality.com takes an unconventional look at the attractions industry. Follow on twitter @ThemesRenewed Joe lives in Sacramento, California with his wife, dog, and a ghost.
Share
Facebook
Twitter
Linkedin
Email
Print
WhatsApp
Pinterest
ReddIt
Tumblr
Previous articleWalt Disney Company Pledges Quarter Million Dollars to Walt Disney Birthplace
Next articleJackson Hole Wildlife Film Festival and CITES Announce Winners of International Elephant Film Festival