The Natural History Museum of Utah at the Rio Tinto Center offers a new multiplayer game – Utah Climate Challenge – to help visitors consider issues of sustainability, biodiversity, population growth and urban sprawl. Located in the Utah Futures gallery, the game is designed by Preloaded, a BAFTA-winning London-based games and VR studio that specializes in designing games with purpose to tackle complicated issues for a wide audience.

“We know from large-scale studies that Utahns want clean water and air, a productive economy, plenty of food, and places for recreation. But we also know the state’s population is rapidly growing, many resources are finite and the climate is changing, which requires a careful balance,” said Becky Menlove, Associate Director for Visitor Experience at the Museum. “Utah Climate Challenge invites individual choices, illustrates cause and effect, and ultimately encourages collaborative decision making, all rooted in some very complex content.” 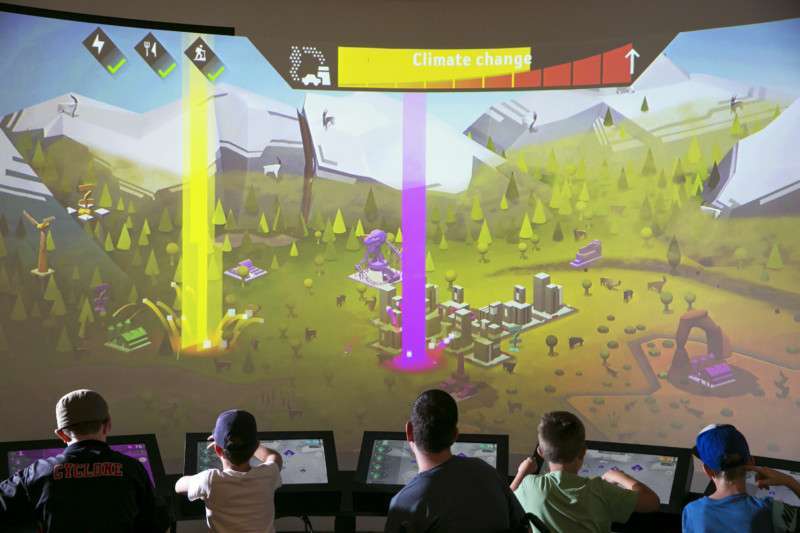 Visitors entering the Museum’s dedicated space see a vibrant panorama representing Utah. The game works on a number of levels, so visitors of all ages can enjoy the experience. Gameplay seats up to five players, working together across several rounds to make changes to their environment. A simple cause-and-effect system rewards younger visitors with striking visuals, while older players can delve deeper and make more strategic choices as they learn to adapt to a changing climate. Players must discuss their strategy to excel as a team.

Will a ski resort or national park bring more fun to the world? Can a vertical farm generate enough food? How will coal or gas energy affect air quality? Every small decision adds up to larger consequences and players inadvertently adopt roles as advocates for particular ways of meeting the needs of the city.

“Games are a brilliant – perhaps the best – medium to present complex systems to a novice audience,” said Preloaded Head of Design, James Allsopp. “Games can show in real time the interplay and causal effect of complex dynamics, and by doing so make this complexity understandable, and often more relatable. Utah Climate Challenge is a perfect example of the use of games to deliver transformational experiences for a mainstream, non-gaming audience.”

Over 4,000 players have already logged in at the Museum to play Utah Climate Challenge, with most players opting for the Eco Warrior play-style, meaning they’re playing to reduce the effects of climate change. Additionally, 40% of players play all the way through six rounds, which indicates a remarkable hold time in a museum setting. The game’s content is based on a variety of real-world data sets to help make the experience authentic.

“We have witnessed an extraordinary level of collaboration and group strategy among game players, even when the players are strangers”, said Menlove. “Young people especially become invested in their choices and are eager to share their strategies with other players entering the gallery space. While Utah Climate Change is only a game, it’s one in which the players have a good deal of agency to make positive change. Our hope is that visitors will take away these ideas – that their choices matter, that collective impacts are critical, and that we can all work together to make the future we want in Utah.”

According to Allsopp, the topic of climate change was one of the most complex subjects ever tackled at Preloaded, but the challenge absolutely fits with the studio’s passion for creating games with purpose and motivated the team to make the topic more engaging.

“While most people understand a basic concept of climate change, comprehending the complex phenomena which drive it is a far more challenging endeavor,” said Allsopp. “However, this knowledge is vital for society, and the wider world, to make informed choices about how they live their lives for the future of the planet.”

Joe Kleimanhttp://wwww.themedreality.com
Raised in San Diego on theme parks, zoos, and IMAX films, InPark's Senior Correspondent Joe Kleiman would expand his childhood loves into two decades as a projectionist and theater director within the giant screen industry. In addition to his work in commercial and museum operations, Joe has volunteered his time to animal husbandry at leading facilities in California and Texas and has played a leading management role for a number of performing arts companies. Joe previously served as News Editor and has remained a contributing author to InPark Magazine since 2011. HIs writing has also appeared in Sound & Communications, LF Examiner, Jim Hill Media, The Planetarian, Behind the Thrills, and MiceChat His blog, ThemedReality.com takes an unconventional look at the attractions industry. Follow on twitter @ThemesRenewed Joe lives in Sacramento, California with his wife, dog, and a ghost.
Share
Facebook
Twitter
Linkedin
Email
Print
WhatsApp
Pinterest
ReddIt
Tumblr
Previous articleBen Caswell Named Regional Manager for AVIXA Oceania
Next articleSEGD Now Accepting Entries for 2018 Global Design Awards