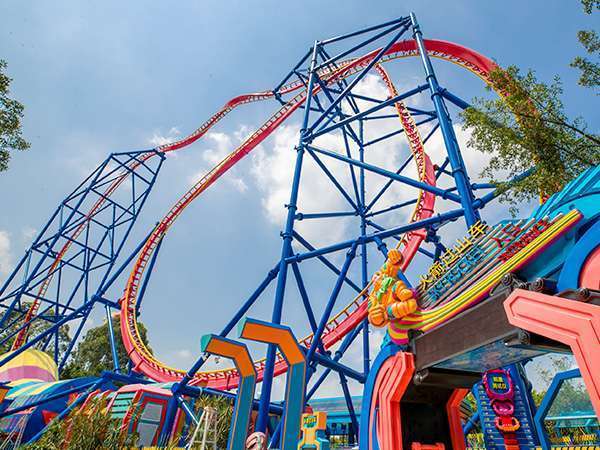 Chimelong Paradise theme park in Guangzhou, China celebrated the National Day holiday with the debut of its high-tech launch coaster – the Sky Rocket Roller Coaster. The multi-launch roller coaster commissioned by parent-company Chimelong Group was designed and manufactured in the United States by Baltimore-based Premier Rides and the ride equipment was exported to China earlier this year.

The multi-million dollar triple-launch coaster integrates many unique elements, including Premier Rides’ advanced magnetic drive technologies and high-quality U.S. fabricated and welded steel. The layout is the first of its kind in Asia and features one of the highest inversions in Asia.

Jim Seay, president of Premier Rides, commented, “The theme park market in China is an exciting one and all of us at Premier are motivated to not only be part of that market, but to also set the industry standard by bringing in a world-class USA-made attraction for the Chimelong Group. The minds behind the Chimelong Group certainly wanted to make a statement with this ride and we are honored to be part of their formula for success.”

Almost six hundred and ninety million people travel for the celebration of China’s Golden Week holiday, so it was very important and satisfying for Chimelong to have the ride open on time and be available for its large number of holiday visitors. Chimelong coaster enthusiasts described the ride as a “ground breaking, free falling” experience. The triple-launch coaster is based on the Premier Rides’ award-winning coasters, SUPERMAN Ultimate Flight located at Six Flags Discovery Kingdom in California and Sky Scream located at Holiday Park in Germany.  Sky Rocket has the most current launch system technology available in the industry.  With the exception of the coaster train itself, there are virtually no moving parts on the ride which makes the attraction very reliable and maintenance friendly.

Premier Rides is known for focusing on large, technically complex projects that incorporate the newest technologies and has provided the ride equipment for award-winning attractions like The Revenge of the Mummy™ at Universal Studios and the world record-breaking Full Throttle at Six Flags Magic Mountain.

At nearly 50 meters high, riders experience lightning speeds of 100 kilometers per hour, with many exciting and unique elements including multiple launches, a twisting heartline inversion, ascending and descending twists, and two vertical rolls.  After an initial slingshot launch using Premier Rides’ signature magnetic launch technology, riders execute a vertical ascent of approximately 20 meters, and then drop back through the station where they are accelerated backwards to a height of 25 meters. After a brief cliffhanger pause, the sleek train rockets through the station and is accelerated this time to a height of 50 meters. The train then slows for dramatic effect where guests can appreciate how high they are while anticipating an amazing twisted heartline roll directly ahead. After executing the roll, the train is braked before guests enter a face-first vertical twisting drop, ending in an over the top loop where riders will experience the force of approximately 3 ½ Gs. The riders then drop to ground level, where they again shoot through the station and then smoothly come to a stop as they drop backward into the station.

Joe Kleimanhttp://wwww.themedreality.com
Raised in San Diego on theme parks, zoos, and IMAX films, InPark's Senior Correspondent Joe Kleiman would expand his childhood loves into two decades as a projectionist and theater director within the giant screen industry. In addition to his work in commercial and museum operations, Joe has volunteered his time to animal husbandry at leading facilities in California and Texas and has played a leading management role for a number of performing arts companies. Joe previously served as News Editor and has remained a contributing author to InPark Magazine since 2011. HIs writing has also appeared in Sound & Communications, LF Examiner, Jim Hill Media, The Planetarian, Behind the Thrills, and MiceChat His blog, ThemedReality.com takes an unconventional look at the attractions industry. Follow on twitter @ThemesRenewed Joe lives in Sacramento, California with his wife, dog, and a ghost.
Share
Facebook
Twitter
Linkedin
Email
Print
WhatsApp
Pinterest
ReddIt
Tumblr
Previous article
Picsolve Announces New Digital Platform Utilizing Facial Recognition Technology
Next article
Efteling Employs VR Solution to Enable Disabled Guests to Experience Landmark Attraction