Projecting the Past: At Saint Louis Union Station, a 19th Century space is creatively reimagined with 21st Century tech 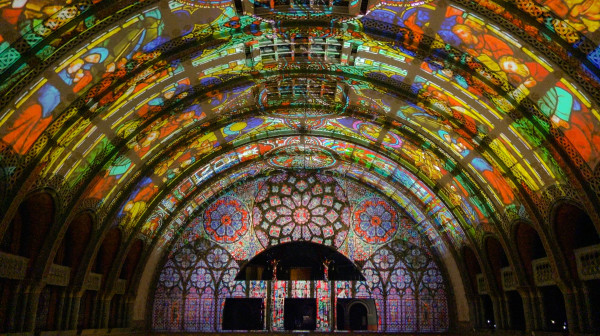 The Grand Hall Experience at Union Station demonstrates how an older structure can be adapted to present an advanced, multimedia 3D show within the confines of historic preservation – and as a permanent installation. The new Grand Hall Experience helps draw international visitation and enhance guests’ stay at the adjoining DoubleTree Hotel. Technomedia reports their client stating the show has produced increases in visitation and revenue – in addition to being celebrated for aesthetic achievement.

Through the use of projectors and speakers mounted behind original decorative elements and two new piers in the center of the Grand Hall, the immersive experience projects animation and still images onto a giant barrel vault – an area some 125 feet long, 80 feet wide and 65 feet high -with accompanying music and sound effects.

“[LHM] wanted us to create something as iconic as the ducks in the Peabody Hotel in Memphis,” said Shawn McCoy, JRA VP of Marketing & Business Development. 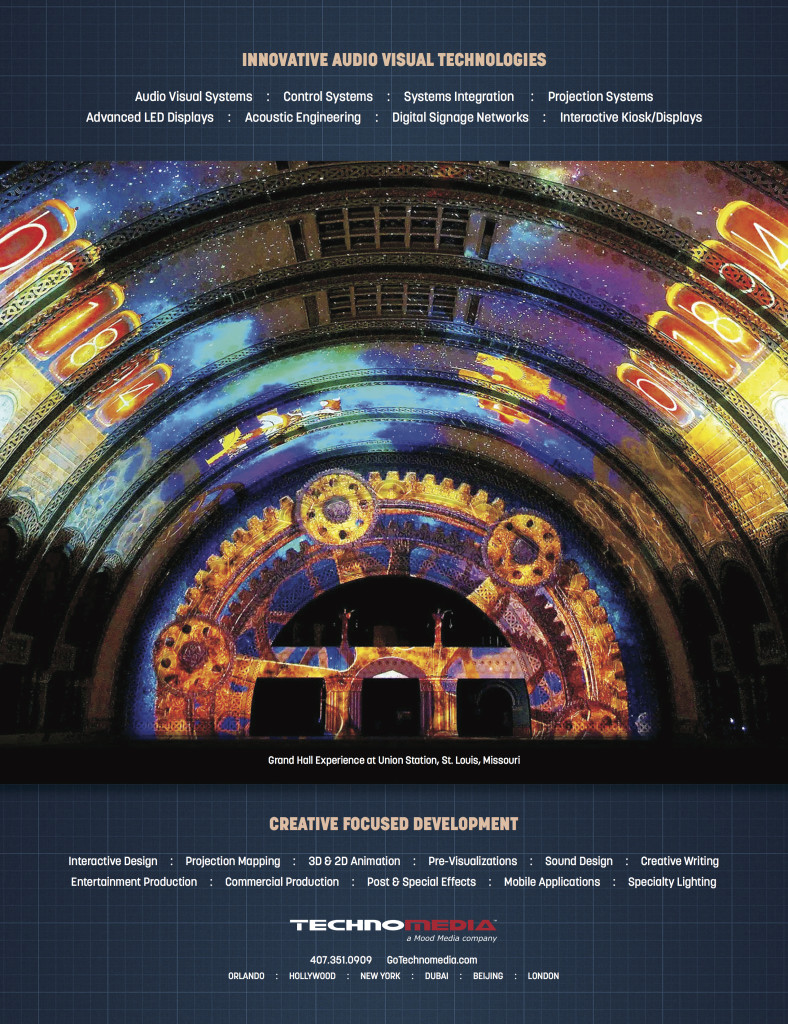 Technomedia president John Miceli was personally active in the project from start to finish – including a hand in creative direction, scripting, sound system design and soundtrack design. Drew Atienza, Technomedia’s Immersive Environment Specialist said, “LHM liked the initial concept design when we did a 3D pre-visualization in the Grand Hall.” Originally, the plan called for projections on just one end of the Grand Hall, but the show concept grew to projection mapping the entire space.

LHM was offered a menu of artistic concepts that would be projected on the barrel vault and the two walls, or “end caps,” at each end of the hall. The themes run the gamut from traditional to experimental. In one show, Michelangelo’s Sistine Ceiling is projected onto the vault and the painting comes to life with movement, while another show takes the viewer into outer space. Nods to the station’s previous role in railroad history and St. Louis sports teams also appear.

Miceli enlisted his longtime colleague, projection mapping specialist Nathaniel Ruhlman of Dorian Orange, as Media Director. Ruhlman and his team of fifteen animators at Dorian Orange found that bringing the ideas to life required some trial and error. Due to the intricate details on the ceiling, some images worked better than others. Likewise, all of the images’ colors are manipulated with more reds and blues to balance the green paint of the ceiling. 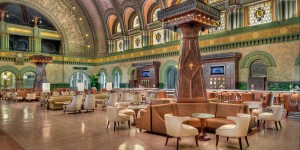 All players had to work carefully around strict preservation requirements. Technicians could not drill any holes in the brick masonry nor place any conduit in public spaces. LHM turned to the Lawrence Group (www.thelawrencegroup.com) as the architect of record in St. Louis, and Chicago-based The Harrick Group’s Joe Hartness furnished designs for a new cocktail bar and two central pedestals. The new elements required careful compromise between creating inconspicuous new architecture in the historic space while providing structures that could successfully hide the projectors and speakers.

An important preparatory step was to laser-map every nook and cranny of the Grand Hall, creating a 12 million dot point cloud from all viewable locations of the room, refined to a detailed polygonal model for computer modeling. With this highly accurate replica of the Grand Hall’s thousands of filigree and sculptural details, and all the idiosyncrasies of the space, the team had defined the projection environment.

Two Christie Digital D4K2530 projectors were specified for the endcaps, installed on the two new, central pedestals crafted by local firm Fixtures Contracting Company, Inc. Twelve Panasonic PT-DX100UK projectors were specified for the barrel vault. Six of the Panasonic projectors were carefully concealed on top of the cocktail bar. The other six are located opposite the bar on the balcony. One-inch box steel pedestals with mounting plates built by Fixtures Contracting Co. to specifications from Technomedia allow easy access to lamp doors for service and secure them into place for image calibration. 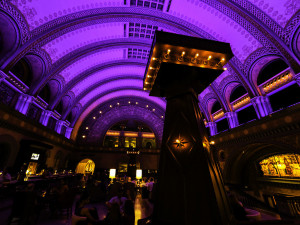 LED lights ring the base of the space, providing ambient light that rotates slowly through different color palettes in between shows, and light and color effects during shows. Technomedia coordinated with American Electric & Data as to which of the 1894 originally installed lighting fixtures and new lighting systems being installed would be controlled for the show, and developed a method for the show system to override architectural lighting programming.

The show is scheduled to begin self-load around 4:00-4:30 PM, and the actual multimedia show starts at 5:00 PM. Then, a new show runs every hour on the hour until midnight. The shows last for approximately 10-12 minutes. In the periods between shows, small teaser effects such as streaks of light, or flame effects, bounce around the vault. Technomedia’s Phil Berard specifically designed the lights not to interfere with the inherent beauty of the Grand Hall when shows are not playing, but rather to enhance the intricate details of the room.

Miceli described the acoustic and physical challenges of the Grand Hall: “The space is highly reflective with a barrel ceiling, and stone flooring producing long reverb and parabolic effects. When we first visited to inspect the site, the sound in the room was unintelligible and very boomy.” Technomedia could not turn to traditional sound dampening to improve sound quality; after all, one of the most important restrictions on the project was preserving the historic space without even a hint of modern manipulation. Custom speakers created by Mood Technologies gave directional control, accuracy and compact size for the team to create Miceli’s desired “smooth blanket of sound that did not allow sound to bounce through the room, but did deliver close proximity precision to the guest listening space in 10 channel surround.”

An old storage room was converted into the equipment room. Conveniently tucked away out of view of the public on the same floor as the projectors and speakers, the 8-foot by 15-foot room functions with minimal need for maintenance from hotel staff. The communication pathway between it and the show equipment utilizes the balcony, off limits to the public. The balcony railing completely conceals the new conduit, preserving the historic space and following preservation restrictions. Technomedia required the installation of some 3,600 feet of fiber optic cable to connect the projectors to the equipment room.

To lighten the burden on hotel staff, Technomedia designed the system to operate as independently as possible. Of particular interest are the 20,000 lines of custom Crestron “self-healing” computer code; in the event of a technical glitch, software engineers designed the program to first attempt to fix itself, before calling in a technician. 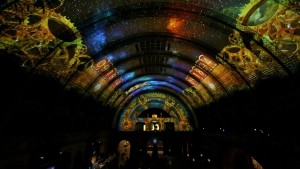 Versatility and the future

Technomedia provided a set number of shows that can play on schedule for the Grand Hall. When there’s a need to depart from the regular program, hotel staff can implement customized images and effects for corporate events, holiday celebrations, sports victories and other occasions, using a handheld device interface provided by Technomedia.

The redevelopment of Union Station’s 23 acres of prime real estate continues. Included in recently released plans, LHM has proposed an observation wheel that would stand just outside the historic train shed behind the hotel, and a variety of amusements and engaging activities for all ages in the space that formerly housed the shopping mall. For the Grand Hall Experience, future plans in development include new shows added each year including a holiday spectacular for 2015. Technomedia plans to facilitate opportunities for visual artists around the world to pitch ideas for collaborating on new shows. Plans for a yearly competition would bring the work of five new artists selected from all entries to Union Station for the final unveiling and celebration.

The Grand Hall Experience was honored by the Themed Entertainment Association (TEA) with a 2015 Thea Award for Outstanding Achievement.

Chris Naffziger (www.stlouispatina.com) is an historian specializing in St. Louis architecture and Renaissance art, who writes about his city’s beautiful built environment. He has worked at numerous museums in Washington DC and in St. Louis, and helped organize the 2012 exhibit “Federico Barocci, Renaissance Master” at the Saint Louis Art Museum. Naffziger teaches at Lindenwood University and is architecture critic at St. Louis Magazine. This is his first contribution to InPark Magazine.

This article is reprinted with permission, adapted from a version that originally appeared in the March 2015 issue of Sound & Communications Magazine, published by Testa Communications. www.soundandcommunications.com.

Martin Palicki
Martin Palicki owns and publishes InPark Magazine. Started in 2004, InPark Magazine provides owners and operators the perspective from "in"side the "park." Martin has also written for publications like Sound & Communications, Lighting & Sound America, Attractions Management and others. Martin has been featured in Time Magazine, CNN.com and Folio. Martin lives in Milwaukee, Wisconsin, USA.
Share
Facebook
Twitter
Linkedin
Email
Print
WhatsApp
Pinterest
ReddIt
Tumblr
Previous articleCalling All Superheroes: Developing an immersive Marvel experience…and then taking it on the road
Next articleFeelings + Financials: Museums generate capital for their communities, and they need to start saying so