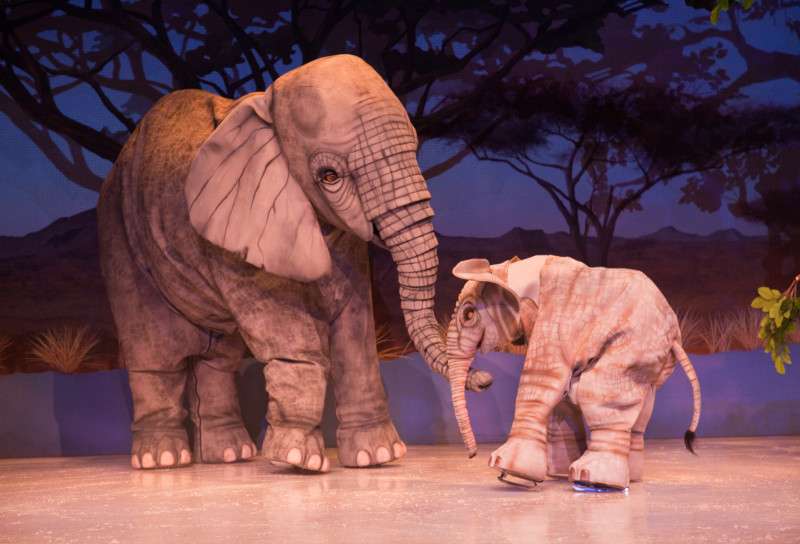 “Even the baby elephant ice skates,” said Robbi Lepre, Entertainment Director at Busch Gardens Tampa. And the elephant’s not alone. At the new Iceploration Show in the park’s Moroccan Palace theater, ice skating, multimedia, puppetry and aerial acrobatics come together to tell the story of a teenager and his grandfather as they set out on a journey around the globe. The duo visits the African Serengeti, the Great Barrier Reef, the Arctic and the Amazon Rainforest.

Of course, Lepre isn’t talking about a real elephant. A cleverly designed costume allows a human skater to zoom around the four tons of ice on the stage as playfully as one would expect the creature to do. The elephant isn’t the main character, but one of dozens of animals brought to life within the stage’s small footprint. The real star of the show, however, isn’t even on the stage. The technological centerpieces live in the control booth and balcony in the form of two Christie 30k projectors. One covers the entire front of the stage, the proscenium, the legs and backdrop. The other is focused directly on the ice.

According to Lepre, the show designers wanted to create a more transformative experience, and projection allowed them that opportunity. Additionally, projection helped solve a key problem for the theater: a lack of space.

The backstage wings are packed tightly with props. The stage floor lifts are covered by a quite solid sheet of ice, so the crew of seven technicians uses elaborate winch systems to move props up and out of the way when they are not being used. As Lepre said, “There’s just as much choreography going on backstage as there is out on the ice.”

Although the show is by no means light on scenic design and props, the projection systems help fill in the gaps, providing images and textures on virtually every surface in the show, reducing the need for additional props.

Media producer Mousetrappe developed the projection design and media content for the show. Company President Daren Ulmer has been a leader in the art of projection mapping that, as its name implies, targets images to specific areas of a surface, often requiring warping and blending to account for changes in depth and movement.

“The one projector covers a wide range of surfaces,” explained Ulmer. “In place of a traditional curtain is a giant projection screen, flanked by additional projection surfaces on the sides and above the stage (covering the proscenium arch). This turns an otherwise static stage into a dynamic canvas that has the ability to change visually in an instant.”

Once the main curtain rises, the projector also covers the legs and backdrop, as well as highlights certain props that are brought out during the show. The main curtain lowers between scenes, allowing set pieces to be changed out, and takes advantage of the narrative power the projection provides to help move the story along, carrying the characters between various regions of the world.

The second projector, located in an old follow spot operator booth, is trained directly on the ice and provides more of a textural benefit. Sometimes actual imagery projected onto the ice extends the set pieces, such as in the Savannah scene when projected grass and watering holes appear. At other times, the imagery reflects action on the main set pieces, such as the reflection of the Aurora Borealis on the frozen Arctic tundra.

An Extron JMP 9600HD media server controls both projectors. The system locks onto the timecode from the audio, and the show essentially runs itself. Steve Farkas, Executive Producer at Vistamax, designed and programmed the systems. Orlando-based Blackwater, and Clearwater-based Command Corporation were the integrators.

“A video tech watches the show for any aberrations,” explained Farkas. “If the timecode connection fails, the tech can manually trigger a digital still for each of the scenes, allowing the show to continue.”

Farkas himself was an employee at Busch Gardens in the ’90s, and is no stranger to ice skating shows. “The park’s World Rhythms on Ice show also used older Christie projectors and videowalls,” said Farkas, “but those systems were used solely for content and during scene changes with no mapping technology.”

“This show as it exists today wouldn’t have been able to exist five years ago,” said Ulmer. “Advances in mapping and warping technologies were really just starting to happen then, and the projector brightness wasn’t at a sufficient level.” In order to use projection in a production, the theatrical lighting had to be pulled way back, or else the projection would be washed out. Although that can still be a concern, projector
brightness has improved significantly in the last few years.

Projection mapping itself is not a new phenomenon, but its full potential is just starting to be tapped. The concept started years ago by projecting still slides onto building facades. Slides were painted by hand to alter their look. It became popular in Europe, often used on historic landmarks and in city squares for artistic events and festivals. With advances in warping and mapping software, along with projector brightness, the art form is becoming more available to different markets.

“In Europe, projection mapping is still used primarily for artistic purposes,” explained Ulmer. “In the US, it is more closely tied to marketing and revenue streams.” That means, it is used here for everything from fashion shows to movie premieres. And, of course, it is becoming popular with theme parks. Universal Studios in Orlando used projections of crumbling buildings to accent a scare zone at its most recent Halloween Horror Nights. Disney World’s Magic Kingdom and Disneyland have been using projection mapping (media produced by Mousetrappe) on its Cinderella Castle and It’s a Small World attraction for more than a year, updating the media content seasonally.

Although Ulmer said there are similarities between projecting on a castle and projecting inside the Moroccan Palace theater, it isn’t quite the same. Both take advantage of Mousetrappe’s proprietary workflow to create the media files, utilizing a toolset adapted from the visual effects world originally designed for turning films into stereoscopic 3D movies.

“At Disney, the Castle is the lead character in the show and everything we’re doing with the projection is enhancing this character. In the theater, we are using a scenic layout as a canvas to paint on, and support the action on the stage,” said Ulmer.

But are there drawbacks? The projectors require extreme precision in positioning, and one small movement at the projector can make a difference of several feet on the stage. Also, a reliance on technology isn’t foolproof. Lepre, a veteran in theater, doesn’t think the projectors should replace old technology, but are rather “another tool in their theatrical toolbox.”

“A scenic prop or backdrop isn’t going anywhere,” said Lepre, “but if the projector dies, and that’s all you rely on, all you have is a grey wall.” That’s why parks such as Disney use two projectors for its castle show, and Busch Gardens uses props and painted backdrops to accent the projection.

Even with its shortcomings, projection mapping, inside and outside the theater, is here to stay. And experts like Ulmer and Farkas only expect the technology to improve and become more accessible to different markets.

“Projector capabilities improve every few years, and allow for greater brightness, detail and saturation,” said Farkas. “Really, with this technology, the sky’s the limit.” • • •

THIS ARTICLE APPEARED IN INPARK MAGAZINE ISSUE 44, PUBLISHED IN 2012. CLICK HERE FOR THE ISSUE 44 TABLE OF CONTENTS.

Joe Kleimanhttp://wwww.themedreality.com
Raised in San Diego on theme parks, zoos, and IMAX films, InPark's Senior Correspondent Joe Kleiman would expand his childhood loves into two decades as a projectionist and theater director within the giant screen industry. In addition to his work in commercial and museum operations, Joe has volunteered his time to animal husbandry at leading facilities in California and Texas and has played a leading management role for a number of performing arts companies. Joe previously served as News Editor and has remained a contributing author to InPark Magazine since 2011. HIs writing has also appeared in Sound & Communications, LF Examiner, Jim Hill Media, The Planetarian, Behind the Thrills, and MiceChat His blog, ThemedReality.com takes an unconventional look at the attractions industry. Follow on twitter @ThemesRenewed Joe lives in Sacramento, California with his wife, dog, and a ghost.
Share
Facebook
Twitter
Linkedin
Email
Print
WhatsApp
Pinterest
ReddIt
Tumblr
Previous articleDisney printerncess
Next articleShedding some light