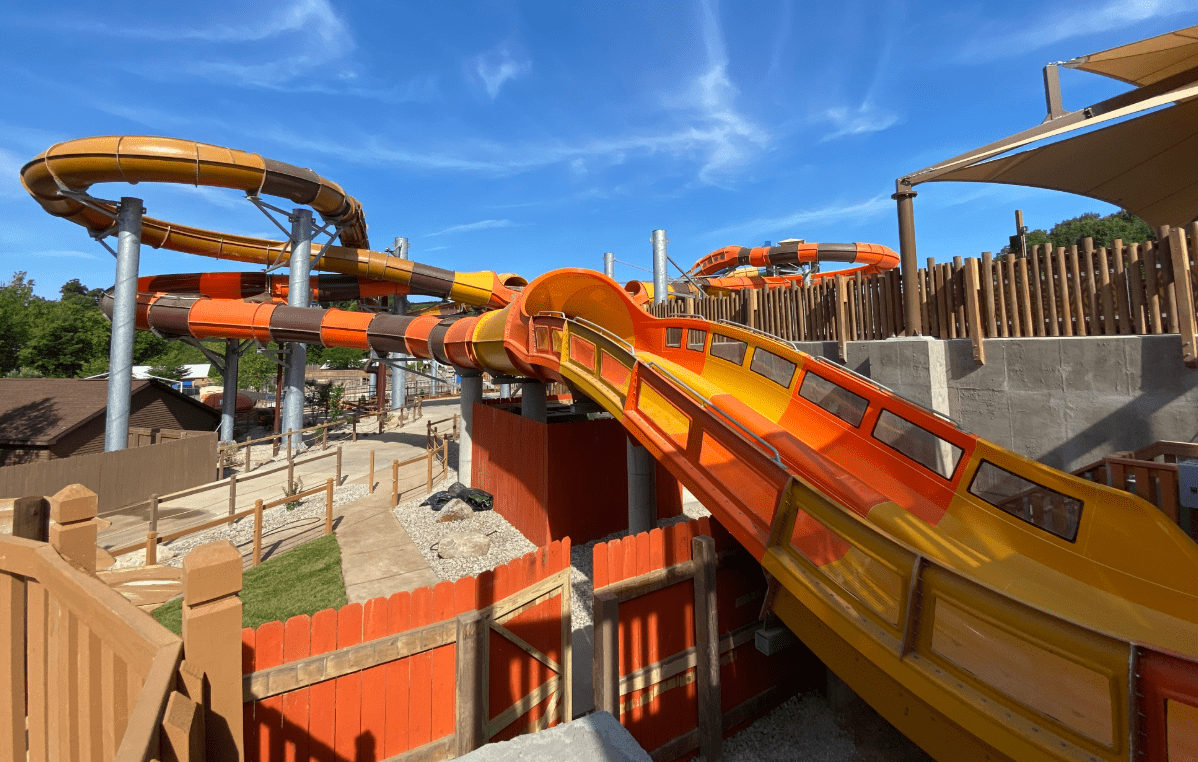 ProSlide Technology Inc. congratulates Holiday World & Splashin’ Safari on the opening of their new ProSlide water coaster, Cheetah Chase. With the latest technology and innovations, Cheetah Chase is a top-of-the-line water coaster and the 27th ProSlide ride at the landmark Santa Claus, Indiana park. The ride marks a lot of firsts for ProSlide including the first head-to-head dueling zone and the first at-grade launched water coaster powered solely through water propulsion.

“Cheetah Chase is something that’s really special and unique”, says ProSlide CCO Ray Smegal. “The combination of pure water propulsion that launches riders from a flat start and the innovative dueling experience truly makes it something the world hasn’t seen before. Right from the beginning, riders are going to have a true water coaster racing experience that’s unmatched in the water ride industry. The intensity of the race and that feeling of fierce competition starts from the beginning of the ride and doesn’t let up until the very end. ” As riders are propelled across the surface reaching speeds of 30 feet per second, they climb a tall, steep hill, propelled exclusively by water. The ride also features two of ProSlide’s patented RallyPOINTs™ – sections of open flume with low divider walls and a u-shaped flume, allowing riders to see and hear each other and heighten the racing experience.

Water coasters have become the most sought-after attraction in water parks today, anchoring and transforming parks all over the world. Cheetah Chase marks the 12th project that ProSlide has collaborated on with Holiday World and their third water coaster. “Nearly every product that ProSlide offers, we have it”, says Matt Eckert, President and CEO of Holiday World. “What keeps us coming back to ProSlide time and again is the quality of the products they’ve built us, the service level they’ve given us, and the uniqueness and innovation that ProSlide has brought to our park.” ProSlide Chairman and CEO Rick Hunter speaks fondly of the company’s relationship with Holiday World: “It’s been almost 25 years since we first started working with them and every step has been fantastic. From that first MAMMOTH style ride back in ’96, to the landmark LIM coaster Wildebeest – voted #1 Water Park Ride in the world every year since it opened – in 2010, up to today with Cheetah Chase, Holiday World’s commitment to exceeding the guest experience has aligned perfectly with our goal to do the same.”

Joe Kleimanhttp://wwww.themedreality.com
Raised in San Diego on theme parks, zoos, and IMAX films, InPark's Senior Correspondent Joe Kleiman would expand his childhood loves into two decades as a projectionist and theater director within the giant screen industry. In addition to his work in commercial and museum operations, Joe has volunteered his time to animal husbandry at leading facilities in California and Texas and has played a leading management role for a number of performing arts companies. Joe previously served as News Editor and has remained a contributing author to InPark Magazine since 2011. HIs writing has also appeared in Sound & Communications, LF Examiner, Jim Hill Media, The Planetarian, Behind the Thrills, and MiceChat His blog, ThemedReality.com takes an unconventional look at the attractions industry. Follow on twitter @ThemesRenewed Joe lives in Sacramento, California with his wife, dog, and a ghost.
Share
Facebook
Twitter
Linkedin
Email
Print
WhatsApp
Pinterest
ReddIt
Tumblr
Previous article
SCAREHOUSE breathes new life into the dead with redesign of Kennywood’s classic OLD MILL
Next article
Halloween Horror Nights canceled at Universal Studios Hollywood and Universal Orlando Resort