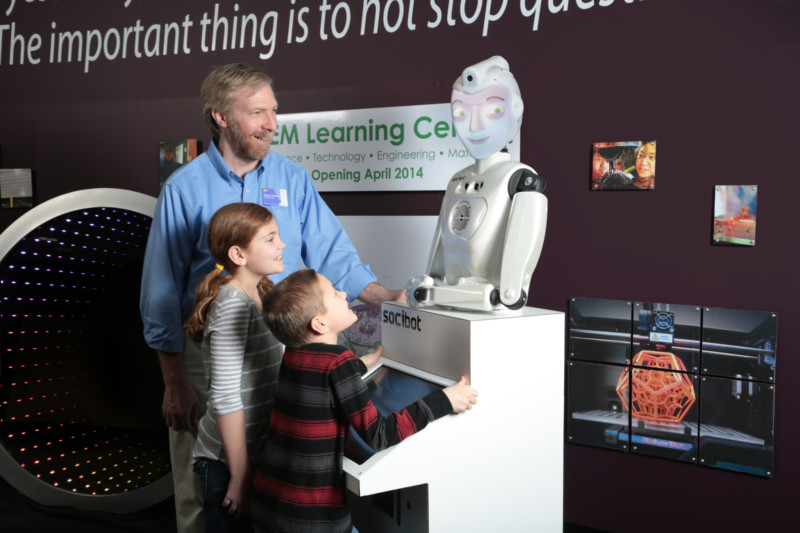 [quote]We are thrilled to be able to share the wonders of science, technology, engineering and math with the Quad Cities community.”  — Kim Findlay, Putnam President and CEO[/quote]

The ribbon cutting marked the cumulating effort of fundraising and planning to bring a renewed focus on science, technology, engineering and math (STEM) education to the Quad Cities.

Using existing museum space, the center features more than 45 hands-on stations, creating a destination where families, school groups, and adults and can explore the wonders of science, engineering, and technology by doing rather than simply reading about a topic.

The Putnam is hosting grand opening celebratory events from 10 a.m. to 5 p.m. on April 12, 13 and 19th and noon to 5 p.m. on April 20. The celebration will feature hourly giveaways that include family memberships to The Putnam, packages of four Giant Screen movie tickets, $15 gift certificates to the museum gift shop and $15 gift certificates to the Snack Stop.

“Although The Putnam has hosted STEM-focused exhibits in the past, this dedicated Center takes things to a whole new level. Visitors will not only realize their aptitudes and interests in various aspects of STEM, but also be surrounded by information and stories of how STEM knowledge is utilized in careers today and into the future,”  said Findlay

The Putnam partnered with numerous local, national and international institutions and companies to make the Science Center a reality. For example, Davenport-based Genesis Systems Group programmed the one-of-a-kind robotic arm featured at the entrance to the center. Roto, an international design and production firm, helped with the Putnam’s vision of repurposing existing museum space. Cobham created a thermodynamic station based on the products they create in the Quad Cities and sell worldwide.

The Putnam is also partnering with Davenport Schools to allow every sixth grader to experience the Center. Additionally, the Putnam will be working with Davenport West High School’s active learning classroom by offering a FabLab, a classroom that features high-tech equipment, 3D Printers, and Smart Boards that support active learning. The FabLab is connected visually to FabLabs throughout the world allowing users to connect with other users’ projects globally.

“The community has been tremendously supportive,” said Nichole Myles, vice president of education and exhibits at the Putnam. “The Science Center has become a reality because of collaborations with many groups – from companies to higher education to kids helping raise money by donating saved coins through our “STEM Makes Cents” program.” 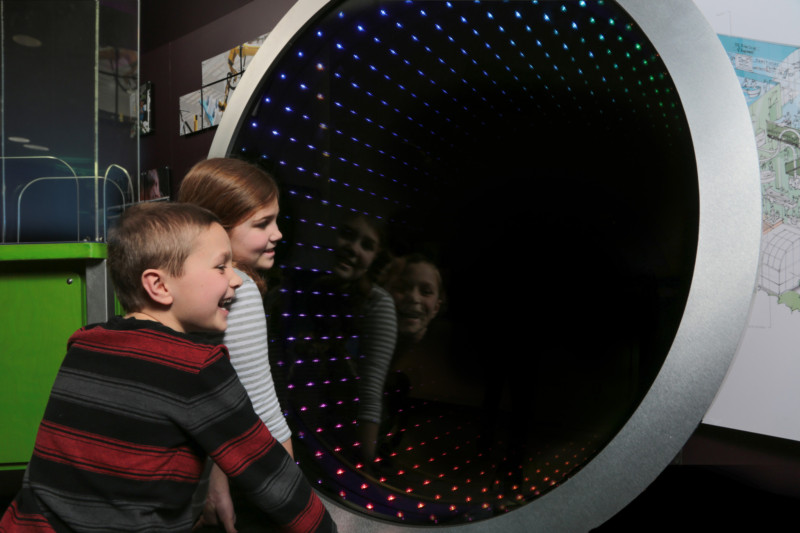 The new Science Center is comprised of a variety of stations dedicated to key aspects of STEM education. The “Innovation” section, for example, will showcase aerospace, robotics, architecture and structure, design and engineering, film and music. The “How Things Work” section immerses visitors in simple machines, electricity and magnets, and light and sound.

“Children make the decision of ‘what they are good at’ by age 10,” Myles said. “How do you know what you’re good at if you’ve never had the chance to try it? At the Putnam, you can discover and learn by doing. “Kids can return to school excited to study subjects like science and math. We’re looking forward to presenting STEM concepts and careers to parents as well, so they can see what’s possible for their children … and perhaps themselves.”

Interactive experiences include, among others:

–The “Tennis Ball Launcher,” which illustrates the power of pressure as tennis balls are launched into the rafters using propulsion

–The “Bernoulli Blower,” where visitors balance balls in streams of moving air, illustrating the Bernoulli Principle

–A “Giant Lever” challenge, where visitors on two sides of a giant lever are challenged to a tug-of-war, each side attempting to pull the lever in their direction – and the smaller person can win

–The “Standing Wave Tube,” which helps visitors discover the three-dimensional nature of sound

–A “LaserTable” where visitors can visualize a laser beam and control its direction by arranging a series of mirrors.

–The 14’ by 18’ suspended “Hexagonal Wave,” a display in The Putnam’s Grand Lobby that brings mathematic calculations to life

“Throughout its 147-year history, The Putnam has been the place where you can go and discover your world,” said Steve Bahls, chairman of the Putnam Board of Trustees. “The Science Center is the next logical step and makes science, math and technology fun for everyone. Coupled with our other permanent exhibits and National Geographic Giant Screen Theater – the Putnam is always changing and relevant creating an optimum learning environment and a great travel destination for families from across the region.”

“We embrace everyone in the community, and we are looking forward to the community continuing to embrace The Putnam experience.” said Findlay.

Joe Kleimanhttp://wwww.themedreality.com
Raised in San Diego on theme parks, zoos, and IMAX films, InPark's Senior Correspondent Joe Kleiman would expand his childhood loves into two decades as a projectionist and theater director within the giant screen industry. In addition to his work in commercial and museum operations, Joe has volunteered his time to animal husbandry at leading facilities in California and Texas and has played a leading management role for a number of performing arts companies. Joe previously served as News Editor and has remained a contributing author to InPark Magazine since 2011. HIs writing has also appeared in Sound & Communications, LF Examiner, Jim Hill Media, The Planetarian, Behind the Thrills, and MiceChat His blog, ThemedReality.com takes an unconventional look at the attractions industry. Follow on twitter @ThemesRenewed Joe lives in Sacramento, California with his wife, dog, and a ghost.
Share
Facebook
Twitter
Linkedin
Email
Print
WhatsApp
Pinterest
ReddIt
Tumblr
Previous article
New “Despicable Me” Themed Land Opens at Universal Studios Hollywood
Next article
Tentacled Creatures From Around the World Converge at Monterey Bay Aquarium in New Exhibit