Puy du Fou Spain opens its doors with 4,000 people attending the premiere of its signature show “The Dream of Toledo” 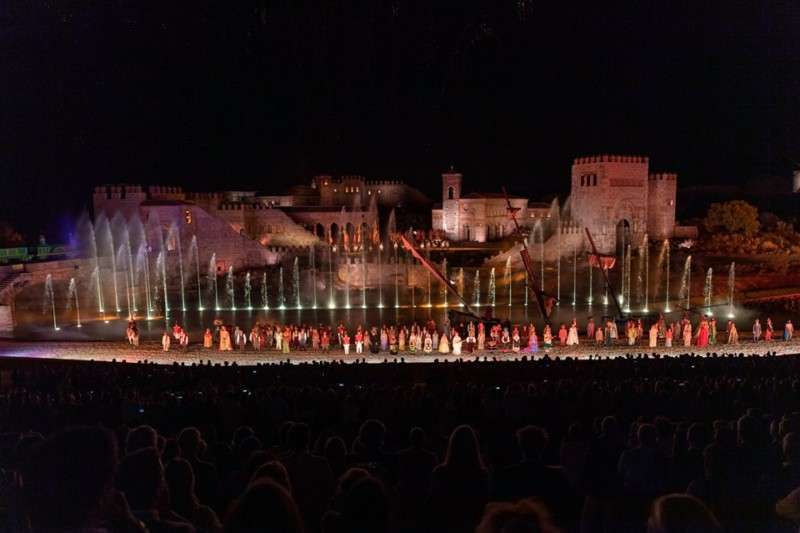 ‘The Dream of Toledo’ was born as the great nighttime show of Puy du Fou Spain and as a precursor of the future showpark, which is under construction and will open in  2021 . The  biggest show in Spain will feature 15 performances this season through the end of October and it’s expected 60,000 people will enjoy the show this year.

‘The Dream of Toledo’, the first show at Puy du Fou Spain, welcomed 4,000 spectators on the night of its premiere. ‘The Dream of Toledo’ is a story that begins on the banks of the Tagus River with a young laundrywoman and the old Azacán of Toledo, who will guide her on a journey back in time in which he will relive great episodes of the history of Spain through protagonists like Taifa King Al-Mamum,  Queen Elizabeth and Charles V.

More than 2,000 characters are represented by 185 actors, riders, and acrobats in a performance area spanning five hectares, complete with spectacular effects and special suprises.

Until the end of October, 15 performances of this show will take place, forming a first season of Puy du Fou Spain that will be combined with “El Arrabal”,  the gastronomic area that will open two hours before and two hours after of the show, offering some of the best dishes  of  Spanish gastronomy.

Some  60,000 people are expected to  enjoy the evening show in this first season, which marks the home of a bigger project that will crystallize in 2021 with the second phase of Puy du Fou Spain: the opening of a park full of big shows that will allow the visitor to travel through the history of Spain. It will feature four big shows during the day among three historical villages, all on 30 natural hectares.

Joe Kleimanhttp://www.themedreality.com
Raised in San Diego on theme parks, zoos, and IMAX films, Joe Kleiman would expand his childhood loves into two decades as a projectionist and theater director within the giant screen industry. In addition to his work in commercial and museum operations, Joe has volunteered his time to animal husbandry at leading facilities in California and Texas and has played a leading management role for a number of performing arts companies. Joe has been News Editor and contributing author to InPark Magazine since 2011. HIs writing has also appeared in Sound & Communications, LF Examiner, Jim Hill Media, and MiceChat. His blog, ThemedReality.com takes an unconventional look at the attractions industry. Follow on twitter @themedreality Joe lives in Sacramento, California with his fiancé, two dogs, and a ghost.
Share
Facebook
Twitter
Linkedin
Email
Print
WhatsApp
Pinterest
ReddIt
Tumblr
Previous articleJRA team members take to global stage with industry presentations this Fall
Next articleSan Diego Zoo Global names David Wu as Chief Development and Membership Officer; President of Foundation of San Diego Zoo Global