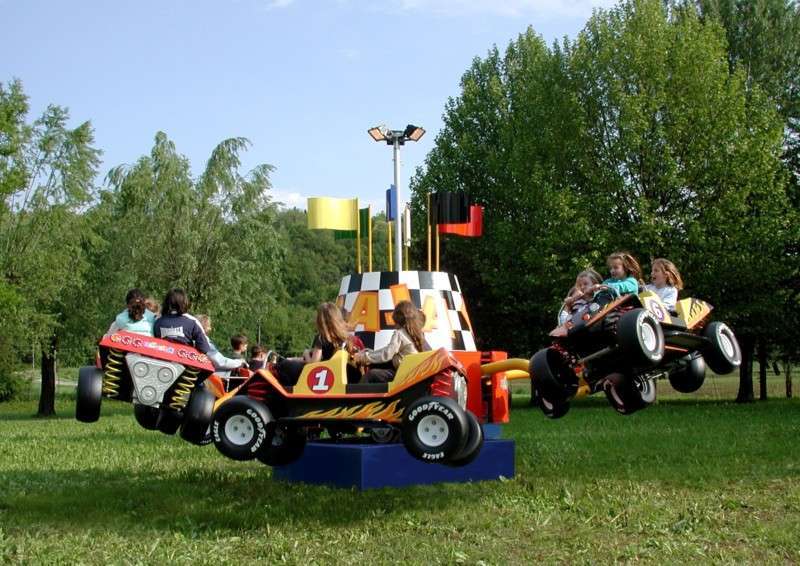 For the 16th consecutive year, Quassy Amusement & Waterpark will make marked improvements for its upcoming season.

“We’re pleased to announce the addition of another new family ride for 2019 as well as some other enhancements at the property,” Quassy President Eric Anderson said today.

Bouncing Buggies will be the new ride located in the heart of the lakefront property. Currently being built by Italian manufacturer Zamperla, the ride is from its popular Jump Around lineup.

“It has a unique and lively action like nothing we’ve offered before,” the park official noted. “The dune buggy themed vehicles will accommodate both youngsters and adults, making it an ideal fit for our demographic.”

Each of the six vehicles will seat up to four children or one adult and two children. As the ride spins into action, it will combine Zamperla’s patent-pending interactive bouncing motion.

Other Rides From Supplier

In 2017 Quassy acquired a new Zamperla Samba Balloon ride the park calls Up, Up & Away, and in 2012 the property added the supplier’s Tea Cups, titled Crazy Cups by the park. Both are popular family attractions.

In addition, Quassy will refurbish its Ice Cream Parlor and add light emitting diode (LED) lighting to some more existing rides within the park. Last season the Yo-Yo Super Swing ride and Tilt-A-Whirl were enhanced by the new energy-saving light packages.

“We’re always looking at ways to make the guest experience more enjoyable at the park,” Anderson added. “Thanks to the continued support of our valued guests, we have been able to make vast improvements to both the land rides area as well as Splash Away Bay waterpark.”

Quassy will open for its 2019 season the last weekend of April.

Joe Kleimanhttp://wwww.themedreality.com
Raised in San Diego on theme parks, zoos, and IMAX films, InPark's Senior Correspondent Joe Kleiman would expand his childhood loves into two decades as a projectionist and theater director within the giant screen industry. In addition to his work in commercial and museum operations, Joe has volunteered his time to animal husbandry at leading facilities in California and Texas and has played a leading management role for a number of performing arts companies. Joe previously served as News Editor and has remained a contributing author to InPark Magazine since 2011. HIs writing has also appeared in Sound & Communications, LF Examiner, Jim Hill Media, The Planetarian, Behind the Thrills, and MiceChat His blog, ThemedReality.com takes an unconventional look at the attractions industry. Follow on twitter @ThemesRenewed Joe lives in Sacramento, California with his wife, dog, and a ghost.
Share
Facebook
Twitter
Linkedin
Email
Print
WhatsApp
Pinterest
ReddIt
Tumblr
Previous articleSilver Dollar City goes all out in 2019 with “The Year of Shows & Festivals”
Next articlemaking mammoth