Three new gigantic water raft rides with a combined length of more than 1,000 feet were constructed during the off season, bringing to 15 the number of slides in the lakeside complex.

The new slides were provided by ProSlide Technology, Inc., of Ottawa, Ontario, Canada. ProSlide was the vendor for the existing 12 slides at the attraction, which was first introduced in 2003 as Saturation Station.

The largest of the three giant slides is Torent,  a TantrumTWIST, also known as TORNADO, which accommodates two-person rafts. 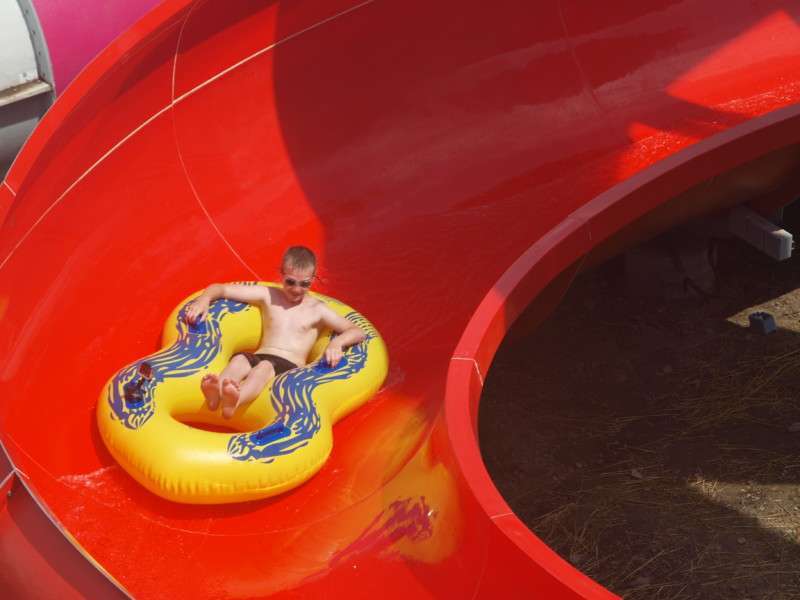 The patented funnel shape flushes riders up the TANTRUM walls, oscillates each tube multiple times and generates the suspended-weightlessness sensation that is unique to ProSlide funnel rides.

After dropping into the funnel, riders are swept up the wall to the equator line, which is actually perpendicular to the ground. The ride creates the illusion of going over the edge and keeps even the craziest thrill enthusiasts returning for more.

Two gigantic PIPEline serpentine slides, Quassy Rapids and the Serpent, round out the three-ride attraction. The new slides all depart from one platform and conclude in runoff troughs near Saturation Station. The PIPEline slides are designed for single our two-rider rafts.

“ProSlide is extremely proud to be the trusted partner to Quassy Amusement Park for every one of the waterslides at Splash Away Bay. We are thrilled to be working again with the Quassy team to add brand new guest experiences to Splash Away Bay,” said Phil Hayles, vice president business development, ProSlide Technology.

The waterpark expansion is the single-largest investment in the park’s history.

Joe Kleimanhttp://wwww.themedreality.com
Raised in San Diego on theme parks, zoos, and IMAX films, InPark's Senior Correspondent Joe Kleiman would expand his childhood loves into two decades as a projectionist and theater director within the giant screen industry. In addition to his work in commercial and museum operations, Joe has volunteered his time to animal husbandry at leading facilities in California and Texas and has played a leading management role for a number of performing arts companies. Joe previously served as News Editor and has remained a contributing author to InPark Magazine since 2011. HIs writing has also appeared in Sound & Communications, LF Examiner, Jim Hill Media, The Planetarian, Behind the Thrills, and MiceChat His blog, ThemedReality.com takes an unconventional look at the attractions industry. Follow on twitter @ThemesRenewed Joe lives in Sacramento, California with his wife, dog, and a ghost.
Share
Facebook
Twitter
Linkedin
Email
Print
WhatsApp
Pinterest
ReddIt
Tumblr
Previous articleHolovis designs AV and interactive media for Madame Tussauds’ Justice League attraction
Next articleAV Stumpfl’s Wings Engine brings Ireland’s Viking Heritage to life