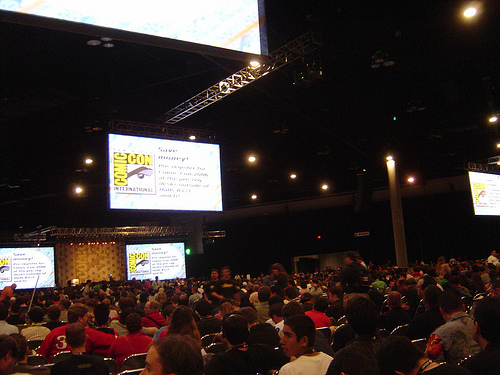 Meeting Services Inc. (MSI) contracted venue-display experts at MiT to provide the D-cinema projection technology for Hall H at Comic-Con. Although MSI had used Series 1 DLP systems for the previous four years, they needed to upgrade to allow for higher quality display and a fully secure environment to all their screens simultaneously. MiT found what they needed in Qube Cinema and their equipment, which can sync multiple Series 2 DLP projectors, a feat that is essential to create the multiscreen display system that the organizers of Comic-Con were looking for.

“We needed to sync as many as five Series 2 projectors displaying on four screens simultaneously and Qube Cinema had demonstrated they could do this,” said Riche Stanley, technical sales for MiT. “Their server and IMB setup complies with DCI specs and means that we can show 4K, 3D and high frame rate content in the immediate future.”

The ability of the Qube XP-I server and Xi IMBs to synchronize multiple projectors had previously been demonstrated at the world premieres of The Hobbit, where they performed flawlessly to deliver the latest high frame rate 3D version of the movie. The XP-I server has the throughput to play back digital content to multiple DLP projectors at 1 Gbps, sufficient to show 2K 3D content at up to 120 fps per eye.

“We synced four projectors at CinemaCon last year and three projectors again this year,” said Rajesh Ramachandran, CTO of Qube Cinema. “This spring we showed MiT a demo, syncing six projectors, and were pleased to see how well the XP-I could handle the data throughput to all six of the Qube Xi IMBs embedded in the projectors.”

Over two dozen different presentations were staged in Hall H at Comic-Con, including a 3D show for a standing-room-only crowd of over 6,500 guests. One large screen, and three “delay” screens suspended from the ceiling for audience members more than 150 feet from the stage, showed 2D and RealD 3D content from NEC NC2000 and NC3200 Series 2 DLP projectors synchronized by the Qube XP-I server and Xi IMBs. The five projectors and images on all four screens were kept in perfect sync with Qube’s native ability to sync multiple IMBs. The XP-I server was connected to the projectors via Gigabit Ethernet, instead of the traditional HD-SDI cables that had been used at previous Comic-Cons.  All the systems were controlled from a single laptop.

“The beauty of this multiscreen projection system is its ease of operation,” said Eric Bergez, director of sales and marketing for Qube Cinema. “It eliminates the unnecessary redundancies and complicated hardware configurations offered by other vendors and provides full DCI compliance – previously unheard of in digital cinema.”

In addition to synchronizing five DLP projectors, the Qube XP-I and Xi IMBs meet DCI specs for security of digital cinema content. Qube’s unique technology ensured that the content was as secure as it is for conventional DCP distribution. All files were encrypted and the forensic watermarking remained intact on all four screens.

“We chose Qube Cinema so we could upgrade to Series 2 DLP projectors and access their enhanced security capabilities,” said Matthew LeVeque, national sales manager at MSI Productions, who has been involved with the technical setup at Comic-Con for the past 16 years. “We’re also looking ahead to 4K projection and now, thanks to Qube, we have a system ready for the time when studios come looking for it.”

The Qube Cinema system is ideal for large-scale gatherings such as Comic-Con, as well as concerts and corporate and fundraising events, where multiple screens are displaying digital cinema content simultaneously.

“We now have a system that meets the needs of the special event business without compromising the security of the content,” explained Ken Freeman, who is the technical director for Hall H. “We don’t have to bypass any security features to get images displayed on four screens or into redundant projectors. The teams from MiT and Qube have delivered a terrific multiscreen system that is robust and secure, ensuring that our filmmakers can bring their best with full confidence.”

“The multi-IMB sync capabilities of the XP-I server and Xi 4K IMBs mean that the promise of multiple-projector digital cinema has been realized,” said Bergez. “Comic-Con 2013 marked a real milestone for digital cinema projection and displays at large-scale events. We were pleased to work with MiT, MSI and RealD 3D to provide secured, synchronized, digital cinema content to Comic-Con.”

Joe Kleimanhttp://wwww.themedreality.com
Raised in San Diego on theme parks, zoos, and IMAX films, InPark's Senior Correspondent Joe Kleiman would expand his childhood loves into two decades as a projectionist and theater director within the giant screen industry. In addition to his work in commercial and museum operations, Joe has volunteered his time to animal husbandry at leading facilities in California and Texas and has played a leading management role for a number of performing arts companies. Joe previously served as News Editor and has remained a contributing author to InPark Magazine since 2011. HIs writing has also appeared in Sound & Communications, LF Examiner, Jim Hill Media, The Planetarian, Behind the Thrills, and MiceChat His blog, ThemedReality.com takes an unconventional look at the attractions industry. Follow on twitter @ThemesRenewed Joe lives in Sacramento, California with his wife, dog, and a ghost.
Share
Facebook
Twitter
Linkedin
Email
Print
WhatsApp
Pinterest
ReddIt
Tumblr
Previous article
VOA Providing Conceptual Design Services to Orlando Music Institute
Next article
Perot Opens First Traveling Exhibit and Looks at Animals BODY WORLDS Style