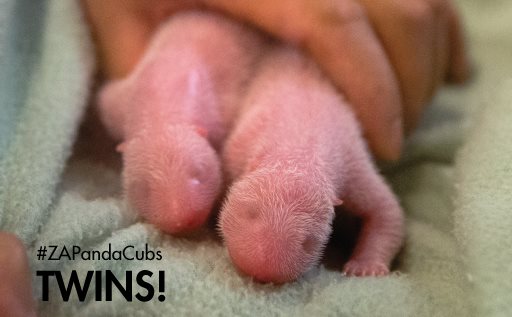 The Animal Management and Veterinary Teams are currently caring for one of the cubs in the nursery unit in the Arthur M. Blank Family Foundation Giant Panda Center; Lun Lun is currently caring for the other. She is an experienced and capable mother, but she has never before given birth to twins, which are not unusual in her species. The Animal Management and Veterinary Teams will base their continuing strategy for the cubs’ care on Lun Lun’s behavior and the cubs’ health. If necessary, they will rotate the cubs’ time with her to ensure that both receive an
equal share of maternal care without overexerting her. In the wild, giant panda mothers typically care for only one cub when twins are born. Thus, it is normal in the wild for only one of the twins to survive. Giant panda twins have survived in zoos within and outside of China. Usually this is accomplished by rotating the cubs with the mother for the first few months. However, giant pandas are born very tiny, and there is a high risk of mortality in the first few months.  This risk increases in twins, which tend to have lower birth rates than do single cubs.

“We’re thrilled to welcome Lun Lun’s and Yang Yang’s twins. This is a success we share with all of our fellow zoological organizations working to understand and protect this iconic species, and we share our joy with our local community and with our colleagues in China,” said Raymond B. King, President and CEO. “Twins are an entirely new scenario for Lun Lun, Zoo Atlanta and our animal care teams, who will no doubt be extremely busy over the next few months.”

Zoo Atlanta Members and guests can expect to meet the cubs in late fall. The newborns’ father, 15-year-old Yang Yang, and older brothers Xi Lan, 4, and Po, 2, remain on exhibit and will not be housed with Lun Lun or the cubs. This separation is normal for giant pandas, which are solitary in the wild. The cubs are the fourth and fifth giant pandas born at Zoo Atlanta. The first cub, Mei Lan, was born in September 2006. A resident of China’s Chengdu Research Base of Giant Panda Breeding since 2010, Mei Lan was the first of the pair’s offspring to return to his parents’ native country. All five of Lun Lun’s and Yang Yang’s cubs have been products of artificial insemination.

Fewer than 1,600 giant pandas are believed to remain in the wild, where funds from Zoo Atlanta are used to support giant pandas living in eight different nature reserves in China. In 2012, Zoo Atlanta received the distinguished International Conservation Award from the Association of Zoos and Aquariums for its long-term commitment to the species.

Joe Kleimanhttp://wwww.themedreality.com
Raised in San Diego on theme parks, zoos, and IMAX films, InPark's Senior Correspondent Joe Kleiman would expand his childhood loves into two decades as a projectionist and theater director within the giant screen industry. In addition to his work in commercial and museum operations, Joe has volunteered his time to animal husbandry at leading facilities in California and Texas and has played a leading management role for a number of performing arts companies. Joe previously served as News Editor and has remained a contributing author to InPark Magazine since 2011. HIs writing has also appeared in Sound & Communications, LF Examiner, Jim Hill Media, The Planetarian, Behind the Thrills, and MiceChat His blog, ThemedReality.com takes an unconventional look at the attractions industry. Follow on twitter @ThemesRenewed Joe lives in Sacramento, California with his wife, dog, and a ghost.
Share
Facebook
Twitter
Linkedin
Email
Print
WhatsApp
Pinterest
ReddIt
Tumblr
Previous article
200 Foot Tall SkyView Atlanta Ferris Wheel Opens July 16
Next article
Perot Museum Reaches One Million Visitors in Less Than Eight Months