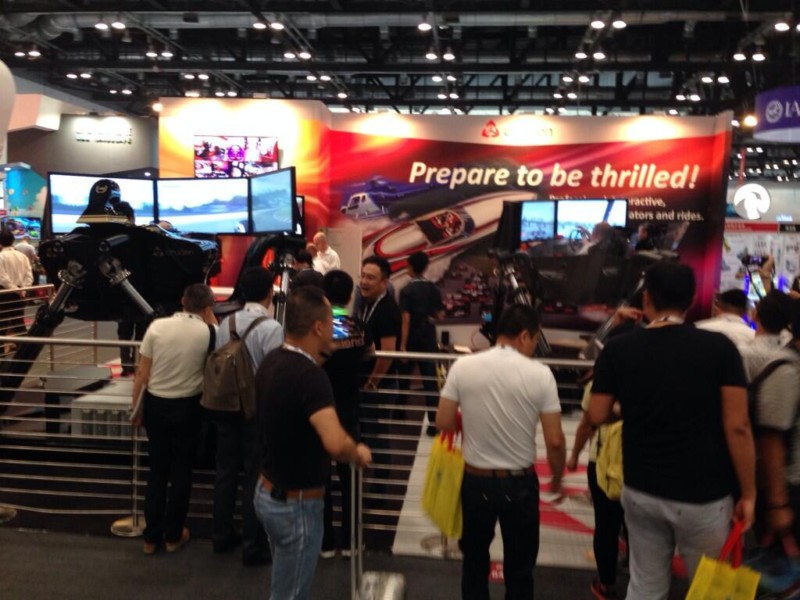 Beijing, China — Preliminary estimates indicate a record-breaking 9,000 industry professionals participated in Asian Attractions Expo (AAE) 2014, the premier international conference and exhibition for the attractions industry in the Asia-Pacific region. The explosive growth of the industry in Asia—specifically in Mainland China—was evident throughout the three-day Expo as a record number of industry leaders participated in the event and a record number of companies showcased the newest products and services on the largest trade show floor in the event’s history. Asian Attractions Expo, which is produced by the International Association of Amusement Parks and Attractions (IAAPA), took place at the China National Convention Center 18-20 June.

The estimated total number of registered participants (9,000) represents an increase of more than 67 percent compared to the 2013 Expo in Singapore. That number includes more than 6,500 buyers, an increase of 80 percent compared to 2013. The buyers are owners, executives, managers, and leaders from theme parks, water parks, family entertainment centers, zoos, aquariums, museums, science centers, resorts, and real estate development companies from more than 70 nations and regions around the globe.

The sold-out exhibition floor featured new products and innovative services from 325 companies representing 33 countries and regions. The exhibits covered approximately 9,100 net square meters of space, which was an increase of more than 30 percent over the 2013 Expo.

“Business is booming in Asia,” said IAAPA President and CEO Paul Noland. “The Expo was packed with executives and decision makers developing brand new parks and attractions in record numbers, along with leaders of well-established parks looking for the next big idea to drive their businesses to new heights.”

Commenting on the education program, IAAPA Vice President of Asia-Pacific Andrew Lee said, “The education conference is always an important reason many people participate in Asian Attractions Expo. As the industry grows in the region, so does demand for attractions industry-focused professional development. IAAPA helps fulfill that need through the AAE education conference and by producing other learning opportunities around Asia throughout the year.”

Asian Attractions Expo 2014: By the Numbers

Asian Attractions Expo 2015 will be held at the Hong Kong Convention and Exhibition Centre 16-19 June 2015. Exhibitor information on the 2015 event is now available on the IAAPA website and attendee information will be available in the fall.

Joe Kleimanhttp://wwww.themedreality.com
Raised in San Diego on theme parks, zoos, and IMAX films, Joe Kleiman would expand his childhood loves into two decades as a projectionist and theater director within the giant screen industry. In addition to his work in commercial and museum operations, Joe has volunteered his time to animal husbandry at leading facilities in California and Texas and has played a leading management role for a number of performing arts companies. Joe has been News Editor and contributing author to InPark Magazine since 2011. HIs writing has also appeared in Sound & Communications, LF Examiner, Jim Hill Media, and MiceChat. His blog, ThemedReality.com takes an unconventional look at the attractions industry. Follow on twitter @ThemesRenewed Joe lives in Sacramento, California with his fiancé, two dogs, and a ghost.
Share
Facebook
Twitter
Linkedin
Email
Print
WhatsApp
Pinterest
ReddIt
Tumblr
Previous articleSeaWorld Orlando Lights Up The Night With Two New Summer Shows
Next articleNew Sennheiser Subsidiary to Specialize in Streaming Technologies