Replica of Independence Hall Under Construction Near Mt Rushmore 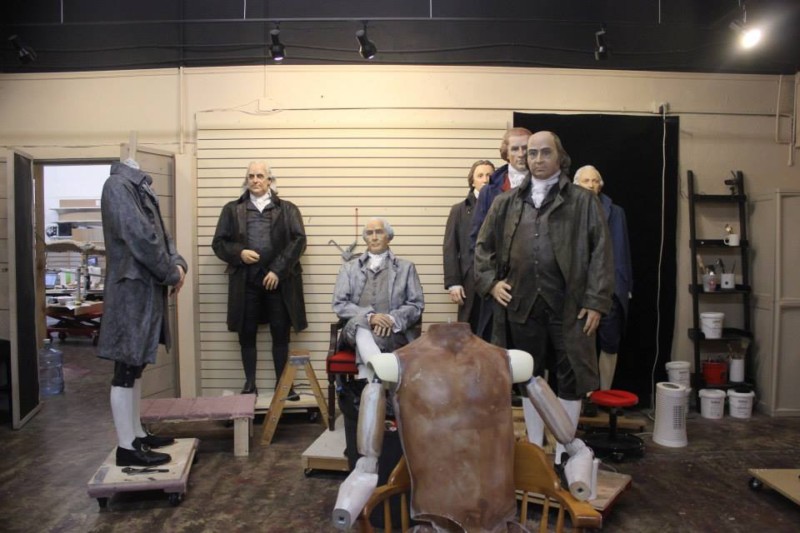 “A replica of Independence Hall, the birthplace of democracy in Philadelphia, is under construction between Reptile Gardens and Bear Country. Once completed, the attraction — Independence Hall: Home of the Founding Fathers — will house a unique tribute to democracy, according to its developer, Rapid City businessman Don Perdue, and artist James Van Nuys.

“Inside a replica of the historic Georgian-style structure visitors will see a three-dimensional sculptural representation of John Trumbull’s famous painting. The painting depicts the moment on June 28, 1776, when the first draft of the Declaration of Independence was presented to the Second Continental Congress.

“‘I’ve always thought that this community and the general community of the Black Hills is not really getting the full benefit of Mount Rushmore,’ said Perdue said, who was the inspiration behind the City of Presidents sculpture project in downtown Rapid City.

“Perdue has commissioned Van Nuys to recreate the painting. They spoke about Perdue’s vision several years ago, but it was only two years ago that Van Nuys started working on a prototype of the sculptures to create a three-dimensional painting.

“‘I decided that the figures needed to go beyond what you see in a wax museum,’ Van Nuys said. As a result, he developed a multi-media approach using fiberglass, plastic, fabric, plumbing fittings, acrylic paint, wood and anything else he could find.”

Joe Kleimanhttp://wwww.themedreality.com
Raised in San Diego on theme parks, zoos, and IMAX films, Joe Kleiman would expand his childhood loves into two decades as a projectionist and theater director within the giant screen industry. In addition to his work in commercial and museum operations, Joe has volunteered his time to animal husbandry at leading facilities in California and Texas and has played a leading management role for a number of performing arts companies. Joe has been News Editor and contributing author to InPark Magazine since 2011. HIs writing has also appeared in Sound & Communications, LF Examiner, Jim Hill Media, and MiceChat. His blog, ThemedReality.com takes an unconventional look at the attractions industry. Follow on twitter @ThemesRenewed Joe lives in Sacramento, California with his fiancé, two dogs, and a ghost.
Share
Facebook
Twitter
Linkedin
Email
Print
WhatsApp
Pinterest
ReddIt
Tumblr
Previous articleGovernment of Zimbabwe Plans $300 Million “Disneyland in Africa” at Victoria Falls
Next articleDisney Villains to Take Over Parks on Friday the 13th