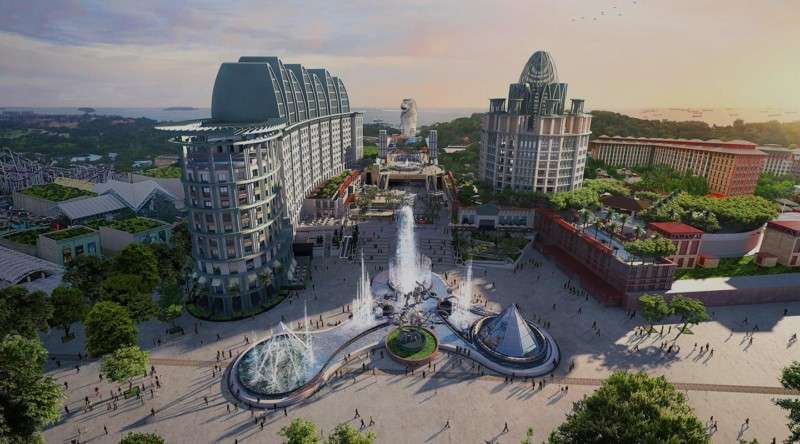 Resorts World Sentosa (RWS) has announced major plans for a history-making expansion and transformation to create a new wave of tourism growth for the next decade. At a total development investment of S$4.5 billion, RWS 2.0 will see an expansion of about 50% new Gross Floor Area (GFA), adding over 164,000 square metres of new attractions, entertainment and lifestyle offerings. This major expansion will be delivered in phases with new experiences opening every year from 2020 to a projected completion around 2025. RWS 2.0 represents a vote of confidence in Singapore as RWS embarks on the next decade of its journey that will unlock the full potential of the Sentosa waterfront.

Both RWS major attractions, Universal Studios Singapore and S.E.A. Aquarium, will see a substantial increase in size. The expansion of Universal Studios Singapore will unveil two new, highly themed and immersive environments based on hugely popular entertainment concepts – Minion Park and Super Nintendo World. These new and expansive areas will feature all-audience and family-friendly attractions as well as themed shops and restaurants. The award winning S.E.A. Aquarium will be expanded to more than three times its present size, and will be rebranded as Singapore Oceanarium. The expansion will see its transformation to an exciting blend of specially curated marine life and additional exhibits of prehistoric marine life and deep sea creatures that will be part of the story of the history of evolution and exploration and how mankind embraces conservation.

A new Waterfront Lifestyle Complex helmed by two new destination hotels, together with the expansion of Central Zone, will add up to 1,100 more rooms. The additional rooms will encourage international visitors visiting RWS attractions to stay longer and enjoy more of its night activities. Together with the significant expansion of its MICE capacity, the extra room capacity will allow RWS to garner more top tier events. The entire waterfront promenade will be completely renewed, anchored by a spectacular public attraction that will set the scene for vibrant seafront activities that include eclectic dining and lifestyle activities. Replacing the Resorts World Theatre will be a new Adventure Dining Playhouse. A new Driverless Transport System will provide last-mile connectivity between the mainland and Sentosa with better efficiency and capacity, encouraging more visitors to RWS and the rest of Sentosa Island. The expansion plans, when completed, will integrate with the transformation of the future Greater Southern Waterfront and continue to be the tourism leader in this region.

The mega investment and expansion of RWS is expected to have significant impact on the Singapore economy. Today, RWS is one of Singapore’s largest private sector employers and home to over 13,000 employees. The expanded RWS will result in approximately 2,800 new employment created across a wide diversity of trades, professions and career opportunities. Through the adoption of technology and innovation, higher-value roles will be created for the PME segment. RWS will nurture and mentor team members to provide them with multi business unit cross-training that generates meaningful jobs and careers.

Mr Tan Hee Teck, Chief Executive Officer of RWS said: “RWS has been a major game-changer and growth engine in the last ten years in transforming Singapore’s tourism landscape. This major re- investment and expansion here in Singapore underlines our belief in the business model and the future opportunities that lie ahead when we complete the development. An even brighter future will lie ahead when RWS will form an integral part of the future Greater Southern Waterfront and become a centrepiece of the transformative journey to enliven the southern corridor. In the year of Singapore’s Bicentennial celebrations, RWS is excited to be embarking on this makeover to ensure that we continue to be the top Integrated Resort in this region. The journey has been fulfilling with RWS providing strong leadership in the Singapore tourism industry. Our achievements are the fruits of the dedication and passion of all our talented team members, happy customers and all stakeholders from both the private and public sectors who have contributed their resources to make RWS a success. We are confident that all these valued people will continue to support us to make RWS 2.0 a resounding success.”

As Universal Studios Singapore gears up to embrace the next generation of theme park entertainment, it will welcome two highly themed and immersive environments – Minion Park and Super Nintendo World – marking its first expansion since its opening in 2010.

The two new environments, one inspired by Illumination’s blockbuster Despicable Me franchise and its sweet but subversive Minions, who have become a worldwide phenomenon, and the other by Nintendo’s globally popular games, beloved characters and adventures, will feature new rides and attractions for all audiences.

The area’s main attraction will be Despicable Me Minion Mayhem, an award-winning, immersive motion-simulator thrill ride. Join Gru, his daughters, and the mischievous Minions on an unpredictable 3-D ride, Despicable Me Minion Mayhem. Join the ranks of the Minions, literally, as part of Gru’s latest scheme. But when things don’t go as planned, you’re launched into an unforgettable journey through his super-villain laboratory. It’s heartwarming and humorous family fun for everyone! There will be other attractions as well as themed dining and merchandise shops.

Super Nintendo World will bring the fun, characters, action and adventure of Nintendo games to life within a highly themed environment. Guests will enter an exciting world filled with highly themed attractions, shops and restaurants where they will feel as if they have stepped into a larger- than-life Nintendo adventure. More details will be announced later.

RWS will expand its popular S.E.A. Aquarium, taking over the adjacent Maritime Experiential Museum, and elevate the aquarium to the next level by creating a three times larger Singapore Oceanarium. The Oceanarium will be the first of its kind in the world, commanding a larger scale and depth of content than before, and featuring a seamless and exciting blend of marine life collection and history about the ocean and evolution of its inhabitants – brought to life using state- of-the-art digital innovation and interactive technology. Offering an immersive experience designed for the 21st century audience, the Oceanarium will demonstrate its thought leadership in marine education, conservation and research efforts. Ocean history and marine biology will meet in a fresh and exciting way in three zones: (1) Evolution & Extinction, (2) Exploration & Deep Ocean, and (3) Conservation.

Guests begin the journey in ‘Evolution & Extinction’ by walking on a simulated ocean floor and experiencing prehistoric marine life from cradle to grave, before proceeding to ‘Exploration & Deep Ocean’ where they meet famous Asian ocean navigators, embark on deep sea exploration and view life-like holographic images of rare ocean creatures, get up close and personal with live marine creatures at a borderless discovery pool and interact with the local intertidal ecosystem through digital mapping. Completing their visit at ‘Conservation’, guests will be inspired to take actions to protect the majestic yet fragile oceans through special installations highlighting the threats to marine biodiversity such as climate change, over-fishing and pollution.

The new Waterfront Lifestyle Complex with iconic design and architecture will house two destination hotels, retail and F&B choices, and a new public attraction, giving the existing promenade a complete makeover and transforming the RWS waterfront into an exciting all-day, all- night premium lifestyle venue for both tourists and locals.

Two new destination hotels, one luxury and the other upscale, will be built as part of the complex. They are envisaged to continue the signature RWS hospitality of premium accommodation, personalised gold standard service and lifestyle pampering such as spa facilities, with each hotel owning its unique character and concept differentiated from existing RWS hotels. Together with the expansion of Central Zone, they will add up to 1,100 more keys and grow in-resort accommodation by more than 70%.

A new public attraction will replace the current Crane Dance in the form of a multi-functional event zone that can be decked out for different festivals and events. An iconic structure will function as a meeting point by day and the focus of an evening show by night. Commanding high visibility within RWS and as far as across the waters from the promenade at Harbourfront and VivoCity, the attraction comes alive at dusk with a spectacular nightly show.

The complex incorporates lush greenery and beautiful landscaping, paying homage to the natural terrain of Sentosa and the island’s green tropical features. A network of pedestrian thoroughfares, generous open green spaces and public meeting spaces across three levels of walkway from the Sentosa Boardwalk will provide fresh visual and physical porosity to the new waterfront.

Building on its strong capabilities in creating and delivering live entertainment and original production, RWS will introduce a new immersive Adventure Dining Playhouse, a concept that is quickly gaining huge popularity worldwide. The first-of-its-kind immersive dining and performance concept in the region on the adventures of Asian pirates, guests will be actively engaged and drawn into the performance that features an original storyline about these courageous seafarers overcoming turbulent thunderstorms and treacherous sea creatures to conquer a giant octopus sea monster.

RWS has been recognised for our unique MICE proposition in offering clients the full suite of state- of-the-art meeting venues and unconventional spaces. Riding on the global MICE trends for higher flexibility and customisable venues to support experiential meetings, the new MICE facilities will complement RWS’ already successful proposition in effectively blending business and leisure in one location, contributing vibrancy to the MICE sector and putting Singapore on the world map as the choice destination for high impact events. This additional space will appeal to a different market segment of event organisers and allow RWS to become the ‘next-generation’ venue for bespoke events.

Finally, RWS will introduce a seamless, efficient and accessible ‘last mile’ connectivity in the form of a Driverless Transport System (DTS) running in both directions along the Sentosa Boardwalk, offering commuters the fastest, shortest and most comfortable route to reach the new RWS waterfront and other parts of Sentosa.

A strategic initiative by RWS in support of the future Greater Southern Waterfront and to enhance ‘first-impression’ visitor experience for guests travelling to Sentosa, the new system will contribute additional commuter capacity with a peak ridership of 1,800 passengers per hour per direction for visitors to Sentosa and RWS. It is also an energy efficient solution with low environmental footprint to significantly improve the accessibility of Sentosa.

Occupying a dedicated track of about 600 metres lining the Sentosa boardwalk, the DTS will shuttle between a station at the start of the boardwalk outside VivoCity and another at the new RWS waterfront. It will run alongside the existing travellator, and adjacent to the pedestrian stretch of the boardwalk.

Joe Kleimanhttp://wwww.themedreality.com
Raised in San Diego on theme parks, zoos, and IMAX films, InPark's Senior Correspondent Joe Kleiman would expand his childhood loves into two decades as a projectionist and theater director within the giant screen industry. In addition to his work in commercial and museum operations, Joe has volunteered his time to animal husbandry at leading facilities in California and Texas and has played a leading management role for a number of performing arts companies. Joe previously served as News Editor and has remained a contributing author to InPark Magazine since 2011. HIs writing has also appeared in Sound & Communications, LF Examiner, Jim Hill Media, The Planetarian, Behind the Thrills, and MiceChat His blog, ThemedReality.com takes an unconventional look at the attractions industry. Follow on twitter @ThemesRenewed Joe lives in Sacramento, California with his wife, dog, and a ghost.
Share
Facebook
Twitter
Linkedin
Email
Print
WhatsApp
Pinterest
ReddIt
Tumblr
Previous articleTHE LEGO MOVIE WORLD opens as LEGOLAND Florida’s largest expansion to date
Next articleITEC Entertainment opens Los Angeles office