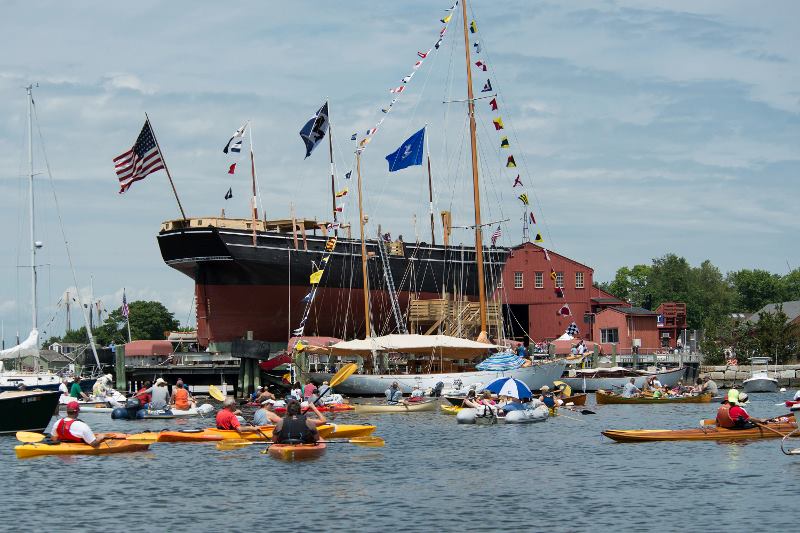 Mystic, CT, USA (July 21, 2013) — After a nearly five-year restoration in the Henry B. duPont Preservation Shipyard at Mystic Seaport, the 1841 whaleship Charles W. Morgan was launched into the waters of the Mystic River today. The ship, a National Historic Landmark and America’s oldest commercial vessel, was carefully lowered into the water in a public ceremony to float on her own bottom for the first time since 2008. 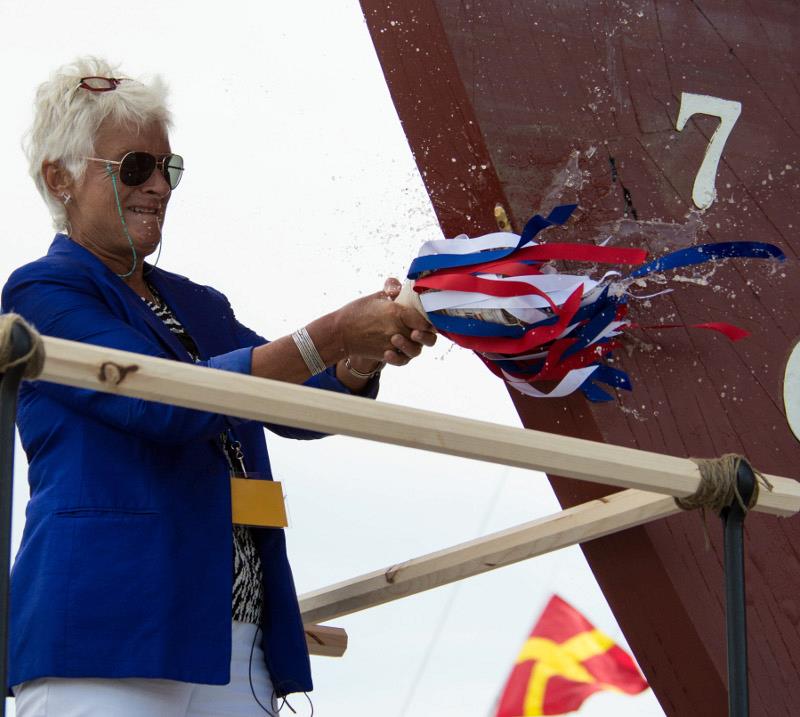 The ship was christened by Sarah Bullard, the great-great-great granddaughter of Charles Waln Morgan, one of the original owners of the ship and the man after which she was named. The bottle Bullard broke across the bow was filled with waters from the oceans over which the vessel sailed during her 80-year whaling career. Samples were gathered from the North and South Atlantic, the Pacific, and Indian Oceans. Water from New Bedford and Mystic were added to represent her original and current homeports.

“This launch is a milestone in the life of this great ship,” said Steve White, president of Mystic Seaport. “Today she turns 172-years-old and we hope this restoration will help preserve her for another 172, so that future generations will be able to walk her decks and hear her tell the important story of our nation’s shared maritime heritage.”

He added, “This moment is a testament to the skill and knowledge of the shipwrights without whose hard work and dedication this day would not be possible.”

Present at the celebration were numerous dignitaries: Gov. Dannel P. Malloy (D-Conn.) took the occasion to announce a $500,000 contribution by the State of Connecticut to the ship’s restoration. U.S. Sen. Richard Blumenthal (D-Conn.) read the text of a U.S. Senate Resolution passed last week commemorating the Morgan’s launch and bestowing upon her the honor of “Ambassador to the Whales.” The resolution supports the plan of Mystic Seaport to “reinterpret the Charles W. Morgan as a vessel of scientific and educational exploration whose cargo is knowledge and whose mission is to promote awareness of the maritime heritage of the United States and the conservation of the species the Morgan hunted.” 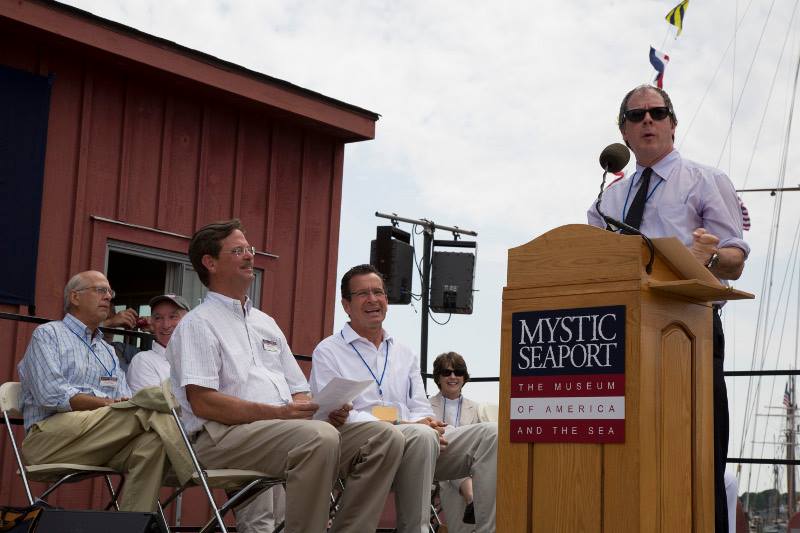 Describing the ship as “an ambassador from a crucial moment in American history,” Filmmaker Ric Burns said in his keynote address, “This one ship has embodied, made possible, made real and brought alive the experience of whaling as no other single artifact on the planet.”

The restoration of the ship began when she was hauled out of the water in November 2008. The focus of the project was to address the hull below the waterline, the majority of which dated to the ship’s original construction. The final phase that begins now will involve rigging, restoring her interior, and installing temporary systems necessary to take her back to sea for a ceremonial 38th Voyage in late May 2014 (the ship completed 37 voyages during her whaling career). 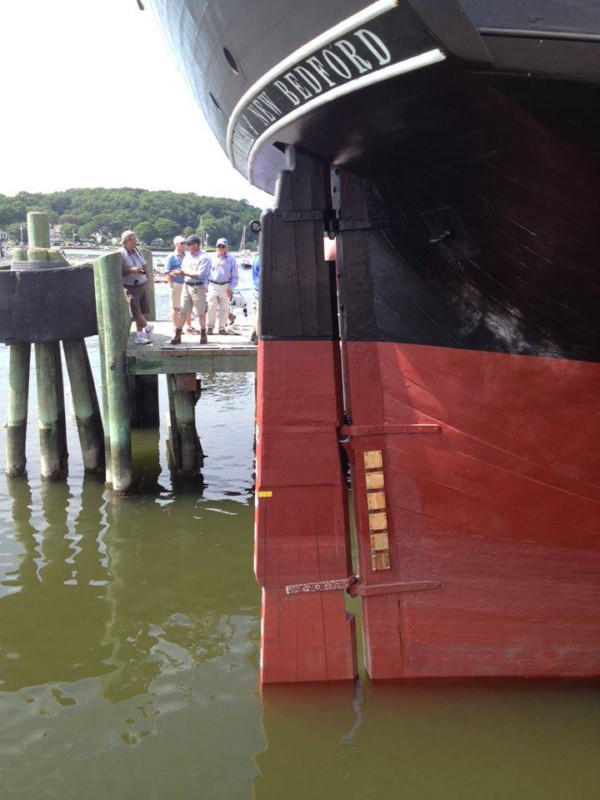 The 38th Voyage will take the Morgan to historic ports of New England. After a period of fitting out and sea trials based in New London, the ship will sail to Newport, Vineyard Haven, New Bedford, and Boston. She will also venture onto the Stellwagen Bank National Marine Sanctuary in partnership with the National Oceanic and Atmospheric Administration, and she will participate in the centennial celebration of the opening of the Cape Cod Canal. The Voyage will be a commemoration of the role of the sea in the history of America and an appreciation of our changing relationship with the natural world.

The Morgan will continue to be open to visitors at Mystic Seaport while the restoration continues.

Joe Kleimanhttp://wwww.themedreality.com
Raised in San Diego on theme parks, zoos, and IMAX films, InPark's Senior Correspondent Joe Kleiman would expand his childhood loves into two decades as a projectionist and theater director within the giant screen industry. In addition to his work in commercial and museum operations, Joe has volunteered his time to animal husbandry at leading facilities in California and Texas and has played a leading management role for a number of performing arts companies. Joe previously served as News Editor and has remained a contributing author to InPark Magazine since 2011. HIs writing has also appeared in Sound & Communications, LF Examiner, Jim Hill Media, The Planetarian, Behind the Thrills, and MiceChat His blog, ThemedReality.com takes an unconventional look at the attractions industry. Follow on twitter @ThemesRenewed Joe lives in Sacramento, California with his wife, dog, and a ghost.
Share
Facebook
Twitter
Linkedin
Email
Print
WhatsApp
Pinterest
ReddIt
Tumblr
Previous article
Universal Becomes Newest Chain to Partner with Coke For a Decade
Next article
IMAX Files Suit Claiming Use of Trade Secrets

Collaborating with China is a special focus of AAM Baltimore program May 19-22; Museum news roundup