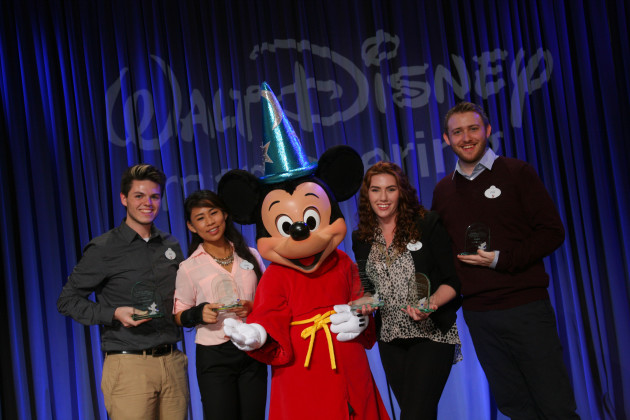 Glendale, CA (February 3, 2015) — The student team from Ringling College of Art and Design were announced as the first place winners of the 24th Walt Disney Imagineering Imaginations design competition during an awards luncheon at Imagineering headquarters in Glendale, California on Friday, January 30th.  Imaginations is a design competition created and sponsored by Walt Disney Imagineering with the purpose of seeking out and nurturing the next generation of diverse Imagineers. Started in 1992, the program has grown to include a separate version sponsored by the Hong Kong Disneyland Resort.

For this year’s Imaginations design competition, students from American universities and colleges were given the following challenge: Take what Disney does best today – from its world-class theme parks, resorts, cruise ships, and other entertainment venues that are globally highly popular with families – and apply it to transportation within a major city. The team’s Disney transportation experience should include station/stops and vehicle designs that reflect the diversity of the city, and are accessible, energy-friendly, and fun. 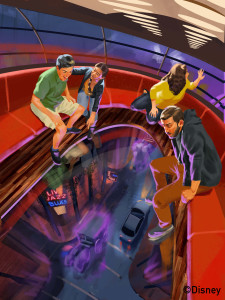 First place was awarded to (pictured left to right with Mickey Mouse) John McDonald, Diana Han, Elizabeth Fox and Josh Newton of Ringling College of Art & Design. Their project, “The New Orleans Double Rail” is a symbol of hope for a city that’s greatest challenge is its location below sea level. The lower train uses modern-day projection technology to tell the story of the city of New Orleans by creating a magical and unforgettable sightseeing experience as the guests soar over the city aboard the suspended Double Rail train.

“We are very proud of the professionalism and creativity shown by the Ringling College team in designing such an innovative and imaginative transportation solution,” said Ringling College of Art and Design President Dr. Larry R. Thompson. “We value the time and effort Walt Disney Imagineering allocates to driving the Imaginations design competition and inspiring creativity in universities across our country. And to our Ringling College Imaginations student team — Elizabeth, Diana, John and Josh – we applaud your achievement.”

Twenty-one college students from six university teams were finalists in Walt Disney Imagineering’s  24th Imaginations design competition. Imaginations is one of the creative ways that Imagineering uses to search for the next generation of talented theme park designers. The top three placed teams were awarded cash prizes, with the first place team receiving $3,000. An additional $1,000 grant was awarded to the first place team, to be equally divided among its sponsoring universities.

The six teams of finalists visited Walt Disney Imagineering in Glendale from January 26 to 30 to make professional presentations to the judging panel, meet and network with Imagineers, go behind the scenes where Disney magic is created, and interview for paid internships during their visit.

A panel of Imagineering judges applies the same criteria to the entries as they would to their own work that includes the team’s ability to collaborate across different disciplines and backgrounds; the mastery of their individual skills; whether the project provides an engaging Guest experience; a good understanding of the local and tourist market in the chosen location; the ability to tell a compelling and engaging story; and knowledge and passion for the Disney brand and Walt Disney Imagineering. Additionally, the project should be unique in that it is not limited to what Guests already experience at Disney parks and resorts.

Second place was awarded to the team from Art Center College of Design for “The Wunderkinds,” a journey through Zurich highlighting the intricacy and integrity of Swiss craftsmanship. Highlighting Switzerland’s most famous products: chocolate, the Alps, and timepieces, the team found that these shared a sense of joy, adventure, and imagination, encompassed by the feeling of “wonder” as the true heart of mastery of these crafts. “Wonder” is the theme – and thus the Wunderkinds were born. The four students on the team are Susey Chang, Waiji Choo, Katherine Park and Josephine Tsao.

Third place was awarded to the team from Drexel University for their “Woollahra” which connects the districts of Liverpool, Hornsby and Sutherland to a main station in the central business district of Sydney, Australia. Also an interactive experience, Woollahra unites Sydney, both geographically and spiritually, using the campfire, a long held place of storytelling and culture, to gather people to share traditions from the past, stories of the lives and vision of what is to come. The four members of the team are Bader Al Moulah, Ahmad Jamal, Justin Petronglo and John VanZelst.

Joe Kleimanhttp://wwww.themedreality.com
Raised in San Diego on theme parks, zoos, and IMAX films, InPark's Senior Correspondent Joe Kleiman would expand his childhood loves into two decades as a projectionist and theater director within the giant screen industry. In addition to his work in commercial and museum operations, Joe has volunteered his time to animal husbandry at leading facilities in California and Texas and has played a leading management role for a number of performing arts companies. Joe previously served as News Editor and has remained a contributing author to InPark Magazine since 2011. HIs writing has also appeared in Sound & Communications, LF Examiner, Jim Hill Media, The Planetarian, Behind the Thrills, and MiceChat His blog, ThemedReality.com takes an unconventional look at the attractions industry. Follow on twitter @ThemesRenewed Joe lives in Sacramento, California with his wife, dog, and a ghost.
Share
Facebook
Twitter
Linkedin
Email
Print
WhatsApp
Pinterest
ReddIt
Tumblr
Previous article“The Hunger Games: The Exhibition” Designed by Thinkwell to Premiere July 1 in New York
Next articleElectrosonic Expands in UK with Regional Office in Aberdeen