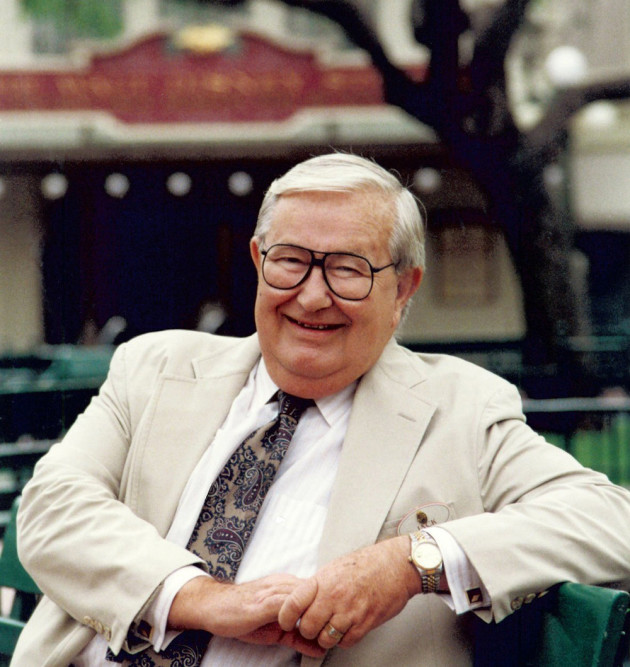 Anaheim, CA, USA (February 29, 2016) — Jack Lindquist, named a Disney Legend in 1994 and inducted into the IAAPA Hall of Fame in 2015, passed away on February 28 at 88 years of age of natural causes at his home in Anaheim.  He was instrumental in the operation and marketing of Disneyland during its first few decades and later at other Disney theme parks and resorts around the world. Following is his official biography from the Walt Disney Company:

Jack Lindquist was hired by Walt Disney as Disneyland’s first advertising manager, and eventually played a key role in making the Park a world-famous tourist attraction. From marketing the original “E tickets” to lobbying for Disneyland’s millennial expansion, Jack was involved in nearly every aspect of the theme park.

Known for his relatively hands-off management style, Jack was among the most beloved of Park executives. As Disneyland’s former executive vice president Ron Dominquez once said, “Jack is Jack, no matter where he is or what he is doing. He respects people. He goes out of his way not to be set up on a pedestal.”

Born in Chicago on March 15, 1927, Jack’s family moved to Los Angeles when he was four. A child actor, he appeared as an extra in episodes of the Our Gang series, and, later, danced in the Lucille Ball film Best Foot Forward. After graduating from Hollywood High School, Jack spent two years in the U.S. Air Force and then completed his education at the University of Southern California.

In 1955, while working for a Los Angeles advertising firm, Jack acted as a consultant to one of Disneyland’s original corporate participants. During a meeting at the Park prior to its opening, Jack “fell in love with the place.” One month later, he was working there.

During his 38 years with the company, he spearheaded myriad Disney projects, including Walt Disney’s Magic Kingdom Club, Disney Dollars, the Disneyland Pigskin Classic, the Ambassador Program, and Grad Nites. He also lobbied for expansion of Disneyland, and the development of a second theme park for Disneyland Resort.

Jack Lindquist retired on Mickey Mouse’s 65th birthday, November 18, 1993. A month later, he was honored with a window on Main Street, which reads, “J.B. Lindquist, Honorary Mayor of Disneyland.” Jack published his memoir, In Service to the Mouse, in 2010.

Joe Kleimanhttp://wwww.themedreality.com
Raised in San Diego on theme parks, zoos, and IMAX films, InPark's Senior Correspondent Joe Kleiman would expand his childhood loves into two decades as a projectionist and theater director within the giant screen industry. In addition to his work in commercial and museum operations, Joe has volunteered his time to animal husbandry at leading facilities in California and Texas and has played a leading management role for a number of performing arts companies. Joe previously served as News Editor and has remained a contributing author to InPark Magazine since 2011. HIs writing has also appeared in Sound & Communications, LF Examiner, Jim Hill Media, The Planetarian, Behind the Thrills, and MiceChat His blog, ThemedReality.com takes an unconventional look at the attractions industry. Follow on twitter @ThemesRenewed Joe lives in Sacramento, California with his wife, dog, and a ghost.
Share
Facebook
Twitter
Linkedin
Email
Print
WhatsApp
Pinterest
ReddIt
Tumblr
Previous articleWanda Group to Invest in EUR 3 Billion EuropaCity Retail and Entertainment Project Near Paris
Next articleDuane Wiechman Celebrates 50 Years at Chance Rides