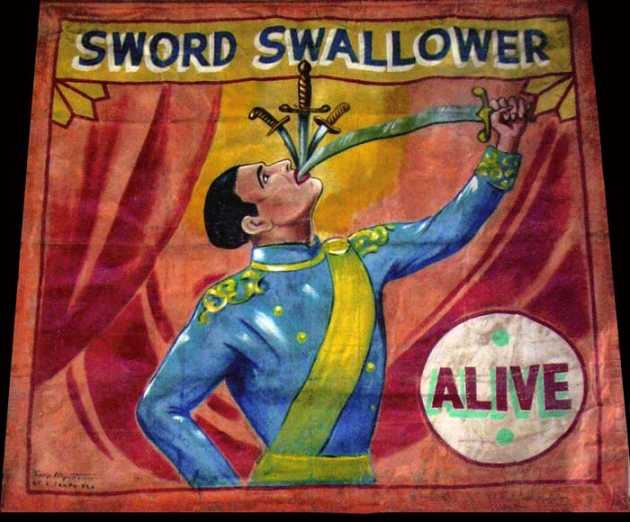 Orlando, FL, USA — Ripley’s Believe It or Not! will once again pay tribute to the ancient art of sword swallowing by holding free sword swallowing performances as part of World Sword Swallower’s Day on Saturday, February 28.

Sword swallowers will include: 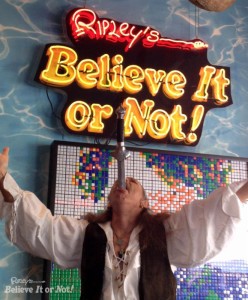 Performances typically start around 2:00 pm local time and culminate with an official swallow taking place at 2:28 pm to coincide with the 2/28 date.

This will be the 8th annual World Sword Swallower’s Day celebration, founded by the Sword Swallowers Association International (SSAI) and co-sponsored by Ripley’s Believe It or Not!

“We established World Sword Swallower’s Day to recognize the handful of people in the world who can do this and honor this art that is more than 4,000 years old,” said Dan Meyer, president of the SSAI.

The event also raises awareness of the contributions sword swallowers have made to the fields of medicine and science and raises money for esophageal cancer research.

People who want to try their hand at sword swallowing – and not risk their lives – can use the Ripley iSword app to swallow a virtual sword and freak out their friends. All it takes is nerves of steel and lightning-fast reflexes. The app is available at the App Store for iPhone, iPad or iPod touch iOS 5 or later.

Joe Kleimanhttp://www.themedreality.com
Raised in San Diego on theme parks, zoos, and IMAX films, Joe Kleiman would expand his childhood loves into two decades as a projectionist and theater director within the giant screen industry. In addition to his work in commercial and museum operations, Joe has volunteered his time to animal husbandry at leading facilities in California and Texas and has played a leading management role for a number of performing arts companies. Joe has been News Editor and contributing author to InPark Magazine since 2011. HIs writing has also appeared in Sound & Communications, LF Examiner, Jim Hill Media, and MiceChat. His blog, ThemedReality.com takes an unconventional look at the attractions industry. Follow on twitter @themedreality Joe lives in Sacramento, California with his fiancé, two dogs, and a ghost.
Share
Facebook
Twitter
Linkedin
Email
Print
WhatsApp
Pinterest
ReddIt
Tumblr
Previous articleChristie to Demo New H Series 1DLP Projectors at ISE 2015
Next articlePowersoft’s X Series Awarded by Pro Sound Web/Live Sound International Magazines

Ripley’s Returns to Africa for First Time Since 1933

Oceaneering to supply all ride systems for Falcon’s Beyond properties