Raising the standards of immersive storytelling: Disney opens Star Wars: Rise of the Resistance in Florida 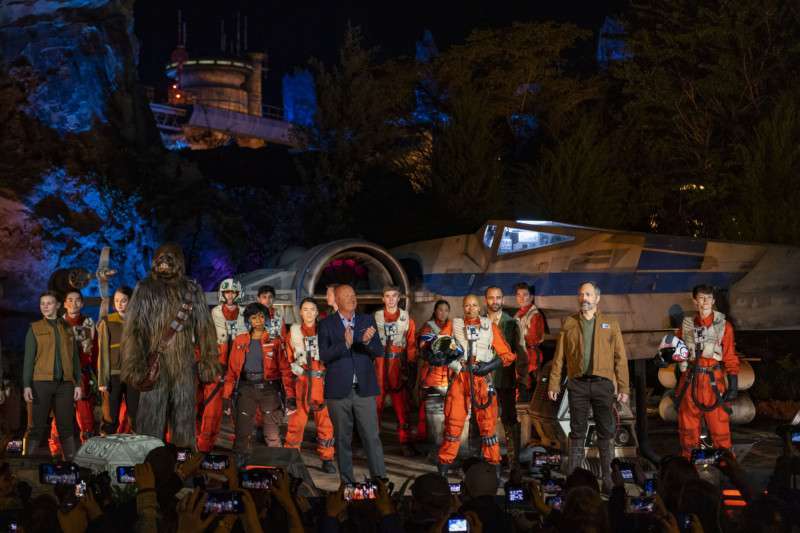 “Rise of the Resistance is nothing short of phenomenal. It blurs the boundaries of what a ‘ride’ can be and raises the standard of immersive storytelling. Even those unfamiliar with Star Wars will find themselves caught up in the environment and action,” shares InPark publisher Martin Palicki, who previewed the attraction as part of a media event. “Disney hit it out of the park with this attraction. It will go through it’s expected growing pains, but the entire attraction sings from start to finish, with so many high notes it’s hard to pick one key moment.”

December 5, 2019 — Star Wars: Rise of the Resistance makes its public debut today, inside Star Wars: Galaxy’s Edge at Disney’s Hollywood Studios in Florida, and at Disneyland Park in California on Jan. 17, 2020. After years of anticipation for this groundbreaking new attraction, guests will now become heroes of the Resistance in a climactic battle with the First Order.

“Star Wars: Rise of the Resistance sets a new standard for what a theme park experience can be,” Chapek said. “Tonight, we’re welcoming the world to experience the Star Wars galaxy like never before, with the opening of the most ambitious, immersive, advanced, action-packed attraction we’ve ever created.”

Star Wars: Rise of the Resistance is one of the most ambitious attractions ever created for a Disney park. The thrilling action takes place in massive sets that give guests the feeling of stepping inside a Star Wars film as they elude the clutches of Kylo Ren and the First Order in a mad dash through a Star Destroyer.

The new attraction adds to the adventures that await inside Star Wars: Galaxy’s Edge, the 14-acre land that opened earlier this year at both Disneyland and Disney’s Hollywood Studios. Guests become part of their own Star Wars stories as they take control of the fastest ship in the galaxy in Millennium Falcon: Smugglers Run, sample galactic food and drink, craft their own lightsabers and build their own droids in interactive retail experiences, and encounter some of their favorite Star Wars characters.

Star Wars: Rise of the Resistance is the latest chapter in the collaboration between Walt Disney Imagineering and Lucasfilm Ltd., a global leader in film, television and digital entertainment production, including the Star Wars franchise. The work on Star Wars between these two creative powerhouses dates back to 1987, when the groundbreaking Star Tours attraction opened at Disneyland.

Joe Kleimanhttp://wwww.themedreality.com
Raised in San Diego on theme parks, zoos, and IMAX films, InPark's Senior Correspondent Joe Kleiman would expand his childhood loves into two decades as a projectionist and theater director within the giant screen industry. In addition to his work in commercial and museum operations, Joe has volunteered his time to animal husbandry at leading facilities in California and Texas and has played a leading management role for a number of performing arts companies. Joe previously served as News Editor and has remained a contributing author to InPark Magazine since 2011. HIs writing has also appeared in Sound & Communications, LF Examiner, Jim Hill Media, The Planetarian, Behind the Thrills, and MiceChat His blog, ThemedReality.com takes an unconventional look at the attractions industry. Follow on twitter @ThemesRenewed Joe lives in Sacramento, California with his wife, dog, and a ghost.
Share
Facebook
Twitter
Linkedin
Email
Print
WhatsApp
Pinterest
ReddIt
Tumblr
Previous articleTickets now on sale for St. Louis Aquarium at Union Station, opening Christmas Day
Next articleThe greatest show: InPark explores IAAPA Expo 2019