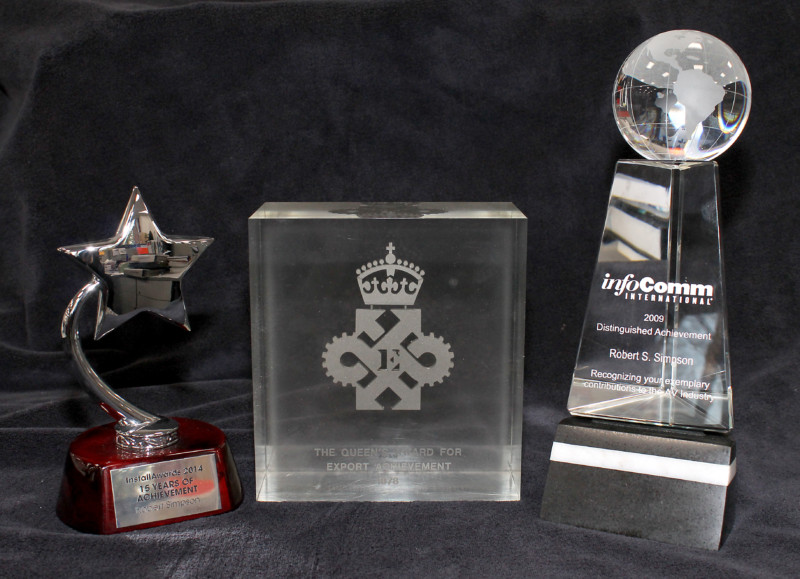 >Electrosonic has announced that Robert Simpson, Co-Founder of Electrosonic, has been awarded an MBE (Member of the Order of the British Empire) in the New Year’s 2017 Honors list for services to the audio-visual industry.  The award was made in recognition of Robert’s unwavering commitment to the audio and video industry over the past 52 years. 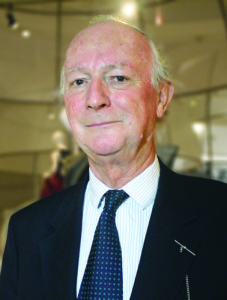 Over the last five decades Robert has helped to define what we now know as the audio and video industry. In his early years, working alongside co-founders Denis Naisbitt and Michael Ray, Electrosonic developed products associated with slide projection and ‘multi-image’ presentation. Often working from a blank page, on electronic designs that had never been done before, often in countries far from home, they created invention after invention for one-of-a-kind experiences and attractions in museums, theme parks and cultural landmarks. Right from the start Electrosonic was engineering large scale audio-visual installations, including complex multi-media shows in Tehran in the 1970s, the world’s biggest videowall (850 CRT monitors) at EXPO 92 in Seville and major theme park installations from 1990 onwards.

On being advised of the award Robert said, “I am pleased to receive this award, not only for myself, but also for my colleagues at Electrosonic. Recognition of the company as a significant force within the Audio-visual industry will be as welcome to them as it is to me.”

Robert’s contributions to the industry include far more than being one of its founding fathers. He is a frequent writer and lecturer on audio-visual and lighting control topics, and his books include ‘Videowalls – The Book of the Big Electronic Image’ (Focal Press 1997) ‘Lighting Control – Technology and Applications’ (Focal Press 2003) and ‘Electrosonic – 50 Years on the Audio-Visual Front Line’ (Electrosonic 2014). He provides CPD accredited industry training programmes for InfoComm International(r) and for the Royal Institute of British Architects, (RIBA). In 2008 he was awarded the INFOCOMM Distinguished Achievement Award and in 1978 the company was awarded the Queen’s Award to Industry for Export Achievement.

Robert was Chairman of Electrosonic Ltd for the period 1964-2004 and from 2005-2015 was a director of, and advisor to, the international Electrosonic Group. He is a life member of the SMPTE (USA), and a Fellow of the BKSTS (UK).

Robert who is now Director of Emeritus of the Electrosonic Group, remains dedicated to the industry. He continues to write and provide industry lectures worldwide, give presentations to new staff as part of their induction program and is the editor of Electrosonic’s bi-annual publication ‘Electrosonic World’ which is currently on issue number 18.

The criterion for the MBE is that it is awarded “for an outstanding achievement or service to the community. This will have had a long-term, significant impact and stand out as an example to others”.

>Speaking of the award, Robert said, “I have thoroughly enjoyed being in an industry which has developed out of all recognition in the nearly 53 years since Electrosonic was founded, and am proud of the contribution we have made.”

Joe Kleimanhttp://wwww.themedreality.com
Raised in San Diego on theme parks, zoos, and IMAX films, InPark's Senior Correspondent Joe Kleiman would expand his childhood loves into two decades as a projectionist and theater director within the giant screen industry. In addition to his work in commercial and museum operations, Joe has volunteered his time to animal husbandry at leading facilities in California and Texas and has played a leading management role for a number of performing arts companies. Joe previously served as News Editor and has remained a contributing author to InPark Magazine since 2011. HIs writing has also appeared in Sound & Communications, LF Examiner, Jim Hill Media, The Planetarian, Behind the Thrills, and MiceChat His blog, ThemedReality.com takes an unconventional look at the attractions industry. Follow on twitter @ThemesRenewed Joe lives in Sacramento, California with his wife, dog, and a ghost.
Share
Facebook
Twitter
Linkedin
Email
Print
WhatsApp
Pinterest
ReddIt
Tumblr
Previous articleCarnival Announces Comprehensive Technology Based Guest Experience for Cruise Ships
Next articleThemed Entertainment Industry Mourns Loss of Universal Creative’s Kathryn Griffiths