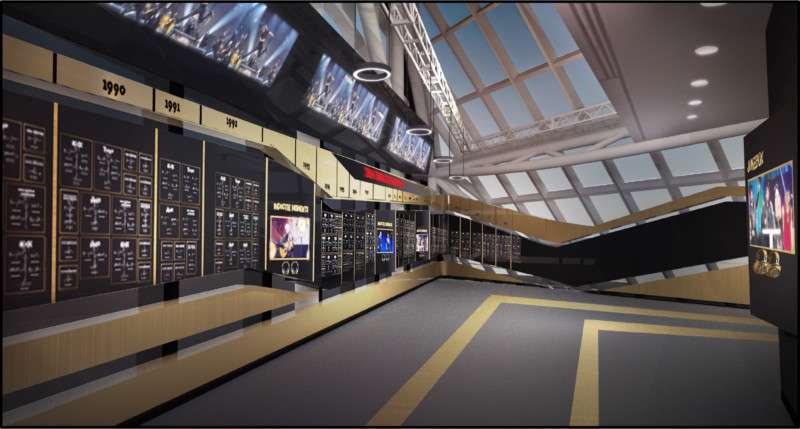 The Rock & Roll Hall of Fame is preparing for its induction ceremony to return to Cleveland next month. Adding to Rock Week, the new Hall of Fame, an entire floor celebrating Inductees, opens April 7 during Celebration Day at the Museum with free admission. It cranks up the fan engagement and gives Rock Hall visitors a chance to voice their choice for who should be in the Rock & Roll Hall of Fame. The new experiences cap off the latest phase of the Rock Hall’s multi-year, multi-million-dollar transformation, which included the opening of the Power of Rock Experience in the Connor Theatre this past summer.

The Hall of Fame completely reimagines how inductees are presented in the Rock & Roll Hall of Fame. The items are brought to life through storytelling, dramatic new displays, floor-to-ceiling video screens, interactive presentations of fan-favorite inductee moments, an artist signature wall, directional audio, a real-time LED news ticker and an In Memoriam dedication. The new floor also features the 2018 Inductee exhibit that shares stories about the impact and influence of this year’s class, which honors Bon Jovi, The Cars, Dire Straits, The Moody Blues, Nina Simone and Sister Rosetta Tharpe.

The Rock Hall is also giving visitors new ways to have their voices heard. Over the summer, the new Say It Loud! story booths, powered by PNC Bank, gave fans the unprecedented opportunity to be interviewed about their favorite rock moments by inductees including Smokey Robinson, Michelle Phillips of The Mamas & The Papas, Mary Wilson of The Supremes, Alice Cooper and others.
    
Using new interactive voting stations, visitors can voice their choice and submit suggestions about which artists should be in the Rock & Roll Hall of Fame. A digital leaderboard will show fans which artists are receiving the most fan votes throughout the year.

The Power of Rock Experience in the Connor Theatre, which is a part of the new Hall of Fame, hosts a signature experience featuring concert-quality sound, larger-than-life video screens and fan interactivity. Visitors feel every beat, hear every chord and are wowed by a powerful film of incredible induction moments directed by Academy Award winner Jonathan Demme.

On March 16, a new exhibit occupying the space previously held by the Inductee exhibit in the Ahmet Ertegun main exhibition hall, called Shine a Light: New Acquisitions and Spotlight Artifacts, will be opened to the public. It showcases many of the Rock Hall’s newest acquisitions, many of which were donated by the artists themselves. Some of the first items on display include Jerry Lee Lewis’s piano, an outfit worn by P!nk, drumheads from Tré Cool, and a guitar donated by Robert Lamm of Chicago. The space will be updated frequently to highlight touring artists, national holidays, important dates in music history and inductee birthdays.

For more information about the Rock & Roll Hall of Fame, the 2018 Rock Hall Induction Ceremony and other upcoming events, visit rockhall.com.

Joe Kleimanhttp://wwww.themedreality.com
Raised in San Diego on theme parks, zoos, and IMAX films, InPark's Senior Correspondent Joe Kleiman would expand his childhood loves into two decades as a projectionist and theater director within the giant screen industry. In addition to his work in commercial and museum operations, Joe has volunteered his time to animal husbandry at leading facilities in California and Texas and has played a leading management role for a number of performing arts companies. Joe previously served as News Editor and has remained a contributing author to InPark Magazine since 2011. HIs writing has also appeared in Sound & Communications, LF Examiner, Jim Hill Media, The Planetarian, Behind the Thrills, and MiceChat His blog, ThemedReality.com takes an unconventional look at the attractions industry. Follow on twitter @ThemesRenewed Joe lives in Sacramento, California with his wife, dog, and a ghost.
Share
Facebook
Twitter
Linkedin
Email
Print
WhatsApp
Pinterest
ReddIt
Tumblr
Previous articleRegistration Open for SIGGRAPH 2018
Next articleRoyal Caribbean Makes Multi-Billion Dollar Investment in New Ship Designs and Leisure Offerings