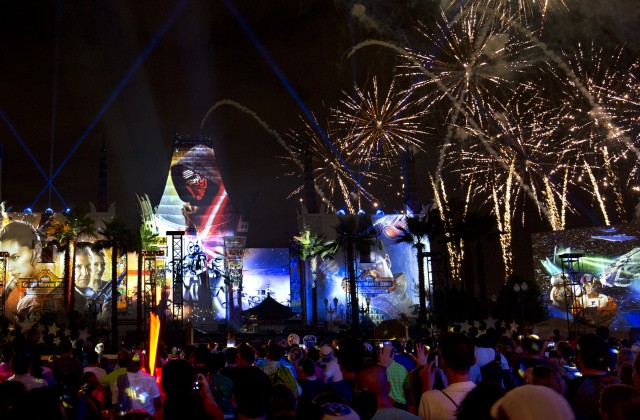 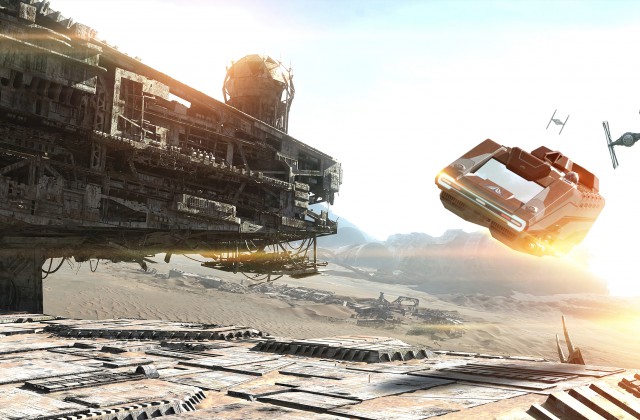 In the popular daytime stage show “Star Wars: A Galaxy Far, Far Away,” guests will get a first look at AWR Troopers from “Rogue One: A Star Wars Story.” Outfitted in their specialized Stormtrooper armor with a dark, ominous gleam, these soldiers serve as bodyguards and enforcers for Director Krennic, a highly placed officer within the Advance Weapons Research (AWR) division of the Empire. A new Troopers sequence will join the show Dec. 16. Performances daily.

The fan favorite nighttime show, “Star Wars: A Galactic Spectacular,” will return to Disney’s Hollywood Studios on December 16 and will join “Jingle Bell, Jingle BAM!” as a second nightly fireworks spectacular at the park through Dec. 31. The show will continue to be presented in 2017.

Starting mid-December, randomized tracks will be returning to Star Tours – the Adventures Continue, the popular attraction that uses motion simulator-based technology. Instead of each ride experience launching from the planet of Jakku, the attraction will be randomized to both start and end at different locations for every galactic journey. New scenes from “Star Wars: Episode VIII” will be added to Star Tours in the coming year. 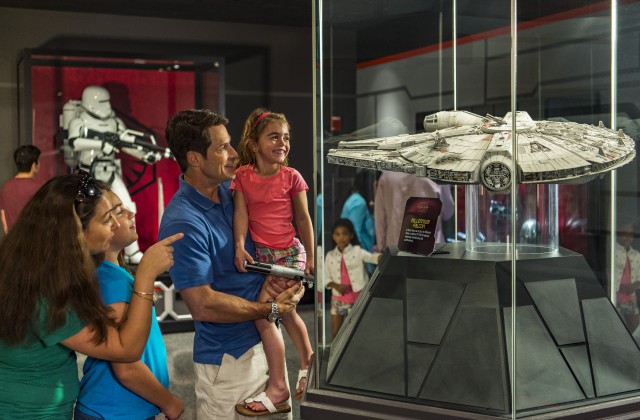 For the ultimate fan comes the ultimate tour. An all-new Star Wars guided tour is a seven-hour immersion in all the park’s current Star Wars experiences. Here’s what it includes:

Screening of “Star Wars: Path of the Jedi”

Younglings ages 4-12 on the guided tour package can also train in the way of The Force in Jedi Training: Trials of the Temple. Priced at $129 per person, tours begin Jan. 2 and will be offered on Mondays and Saturdays throughout 2017. Reservations for January tours can be made soon.

This latest flight of additions celebrating the Star Wars saga continues to elevate the Star Wars presence at Disney’s Hollywood Studios. Entire Star Wars-themed lands are now under construction at the theme park and at Disneyland Park in California.

Joe Kleimanhttp://wwww.themedreality.com
Raised in San Diego on theme parks, zoos, and IMAX films, InPark's Senior Correspondent Joe Kleiman would expand his childhood loves into two decades as a projectionist and theater director within the giant screen industry. In addition to his work in commercial and museum operations, Joe has volunteered his time to animal husbandry at leading facilities in California and Texas and has played a leading management role for a number of performing arts companies. Joe previously served as News Editor and has remained a contributing author to InPark Magazine since 2011. HIs writing has also appeared in Sound & Communications, LF Examiner, Jim Hill Media, The Planetarian, Behind the Thrills, and MiceChat His blog, ThemedReality.com takes an unconventional look at the attractions industry. Follow on twitter @ThemesRenewed Joe lives in Sacramento, California with his wife, dog, and a ghost.
Share
Facebook
Twitter
Linkedin
Email
Print
WhatsApp
Pinterest
ReddIt
Tumblr
Previous articleGateway Ticketing Receives IAAPA Brass Ring Award for Galaxy Connect
Next articleJoanna Del Moral Joins BRPH as Director of Business Development, Leisure Services