Russia to Co-Organize Over 100 Events at Astana EXPO-2017 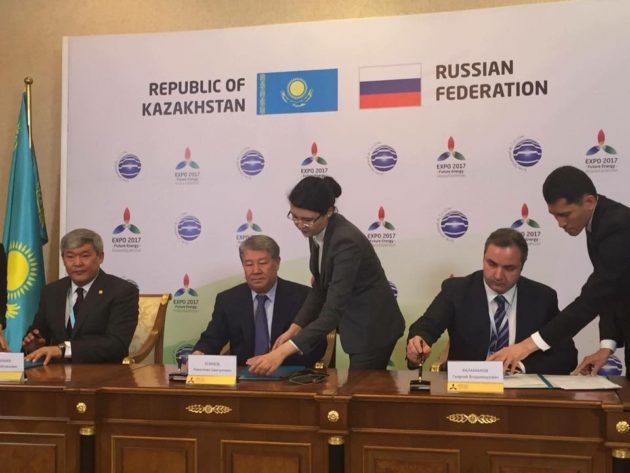 [quote]Construction work is coming to an end.  In October, we will start handing over national pavilions to the participating countries. The Russian Pavilion spans an area of 1,008.6 square meters.”[/quote]

“We have seen the huge effort made by the Kazakhstani hosts. Let me assure you Mr. Nazarbayev that Russia will be most actively involved in this large-scale international exhibition, EXPO-2017, and is prepared to co-organize over 100 activities as part of the event,” stated Vladimir Putin at the 13th Forum of Interregional Cooperation ofKazakhstan and Russia in Astana.

At the Forum, Akhmetzhan Yessimov, Chairman of the Board of National Company Astana EXPO-2017, told the heads of Russia and Kazakhstan about the progress of preparations for the exhibition.

“Construction work is coming to an end.  In October, we will start handing over national pavilions to the participating countries. The Russian Pavilion spans an area of 1,008.6 square meters,” he said. In addition, Mr. Yessimov said that Rosatom and JSC NAC Kazatomprom will present a corporate “Nuclear Power” pavilion at the exhibition.

The Energy Best Practices Area (eBPa) where state-of-the-art “green” energy technologies will be demonstrated will be one of the main focal points at EXPO-2017. The international commission for the selection of participants reviewed 133 applications from 25 countries. 22 projects were approved, including Superconductor, the development of Russian innovators.

Most foreign visitors are expected to come from the Russian Federation. Organizers of EXPO-2017 have already conducted roadshows to give presentations in these regions, as well as in Moscow, Saint Petersburg, Yekaterinburg and Kazan.

As part of preparations for the exhibition, National Company Astana EXPO-2017 signed memoranda of cooperation with Tatarstan, the Altay Region, the Astrakhan Region, the Omsk Region, the Orenburg Region, the Tyumen Region and the Sverdlovsk Region. The parties have agreed that they will cooperate in attracting tourists to EXPO-2017, and studying and developing investment projects, renewable energy sources and environmentally-friendly technologies.

Joe Kleimanhttp://wwww.themedreality.com
Raised in San Diego on theme parks, zoos, and IMAX films, Joe Kleiman would expand his childhood loves into two decades as a projectionist and theater director within the giant screen industry. In addition to his work in commercial and museum operations, Joe has volunteered his time to animal husbandry at leading facilities in California and Texas and has played a leading management role for a number of performing arts companies. Joe has been News Editor and contributing author to InPark Magazine since 2011. HIs writing has also appeared in Sound & Communications, LF Examiner, Jim Hill Media, and MiceChat. His blog, ThemedReality.com takes an unconventional look at the attractions industry. Follow on twitter @ThemesRenewed Joe lives in Sacramento, California with his fiancé, two dogs, and a ghost.
Share
Facebook
Twitter
Linkedin
Email
Print
WhatsApp
Pinterest
ReddIt
Tumblr
Previous articleJohn Lawn Named President of Hershey Entertainment & Resorts
Next articleETF to Showcase Latest Ride Technologies at IAAPA Attractions Expo