Los Angeles, CA USA (November 10, 2015) – Ryan Miziker has taken over as the head and creative director of Miziker Entertainment Group (MEG), with his father and business partner Ron Miziker remaining in a supporting consultant role 30 years after founding the company.

Ron Miziker has had a busy year, collaborating with Franz Harary Productions to design and build the House of Magic, a live, permanent entertainment attraction now open at Studio City Casino in Macau; and being honored by the Themed Entertainment Association (TEA) with the Buzz Price Thea Award for a Lifetime of Distinguished Achievements.

A summary of Ron Miziker’s career was written on the occasion of his Thea Award in spring 2015. 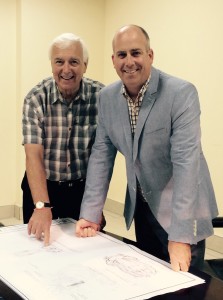 Ryan Miziker says, “Ron continues to bring experience and insight to every project. I have always valued my opportunities to work with him on live shows and media-based attractions in the themed entertainment industry, and with so many talented people. I’ve learned a lot, and we both felt the time was right for me to take the helm of the company that he created.”

“I’m a film producer, but I also love being able to produce a live show experience. It’s a different kind of storytelling,” says Huggins. “And I’m proud to have the opportunity to work with Ron and Ryan.”

Spectaculars have always been a hallmark of Miziker with a focus on designing and producing spectacular parade shows for theme parks. Miziker and Huggins will attend the 2015 IAAPA Attractions Expo in Orlando to talk parade production with park owners and operators, event organizers and design firms.

“Parade shows are a big part of our company legacy,” says Ryan. Every parade is celebration and spectacle, with music, costumes, and colorful characters. But it is also a technically-intense production, that includes all the show systems, special effects and safety considerations of a live show, while moving multi-ton vehicles safely just a few feet away from park guests.”

The company’s parade expertise began when Ron Miziker produced the original Main Street Electrical Parade at Disneyland, which Disney reports was seen by over 1 billion people during its run. He went on to produce several more Disney parades, then produced and staged the first parade for Lotte World, and subsequently designed parades and floats for numerous other theme parks overseas including Universal Studios Singapore and – closer to home – the Tournament of Roses Parade in Pasadena.

Both Mizikers and their company are currently engaged in production of a new nighttime parade for Chimelong Ocean Kingdom in Zhuhai, China, opening in 2016. “Chimelong has been a great partner,” Ron says, “bringing a lot of enthusiasm and a desire to make something special for their guests. We are pushing the boundaries of what is possible, in the same way that we did 40 years ago with the Electrical Parade at Disneyland.” Two other projects in development will be announced soon.

“Parades are perfect for theme parks and resorts in Asia, which favor big shows and spectacle: costumes, color, and of course, great music,” says Ryan. In addition to parades, the company produces all types of spectacular shows as well. “As the theme park industry continues to grow internationally, it is exciting to think about all the cultures, festivals and traditions there are to draw upon,” says Ryan.

According to Ron, “The original parades at Disneyland started as an extension of small-town American celebrations. The Main Street Electrical Parade and Fantasy on Parade were big leaps forward, creatively and technologically. In contrast to any other theme park show, parades provide moments in which guests can interact directly with performers or characters – a smile or a wink, a moment of eye contact. People crave it. Being picked out of a crowd in that way is a special moment of interaction that is not part of everyday life.”

“There’s no secret why parades are important to us,” says Ryan. “They’re larger than life. They bring people together for a moment of celebration, and joy. We all want more of that in our lives. I’m looking forward to the next 30 years of Miziker Entertainment Group.”

For more information, or to set up a business meeting or media interview with Miziker Entertainment Group at the IAAPA Attractions Expo, contact Ryan Miziker, [email protected], +1-818-913-0363.

Joe Kleimanhttp://wwww.themedreality.com
Raised in San Diego on theme parks, zoos, and IMAX films, InPark's Senior Correspondent Joe Kleiman would expand his childhood loves into two decades as a projectionist and theater director within the giant screen industry. In addition to his work in commercial and museum operations, Joe has volunteered his time to animal husbandry at leading facilities in California and Texas and has played a leading management role for a number of performing arts companies. Joe previously served as News Editor and has remained a contributing author to InPark Magazine since 2011. HIs writing has also appeared in Sound & Communications, LF Examiner, Jim Hill Media, The Planetarian, Behind the Thrills, and MiceChat His blog, ThemedReality.com takes an unconventional look at the attractions industry. Follow on twitter @ThemesRenewed Joe lives in Sacramento, California with his wife, dog, and a ghost.
Share
Facebook
Twitter
Linkedin
Email
Print
WhatsApp
Pinterest
ReddIt
Tumblr
Previous article
Issue 60 – IAAPA Attractions Expo 2015
Next article
SeaWorld Announces New Attraction Concepts and Long Term Initiatives