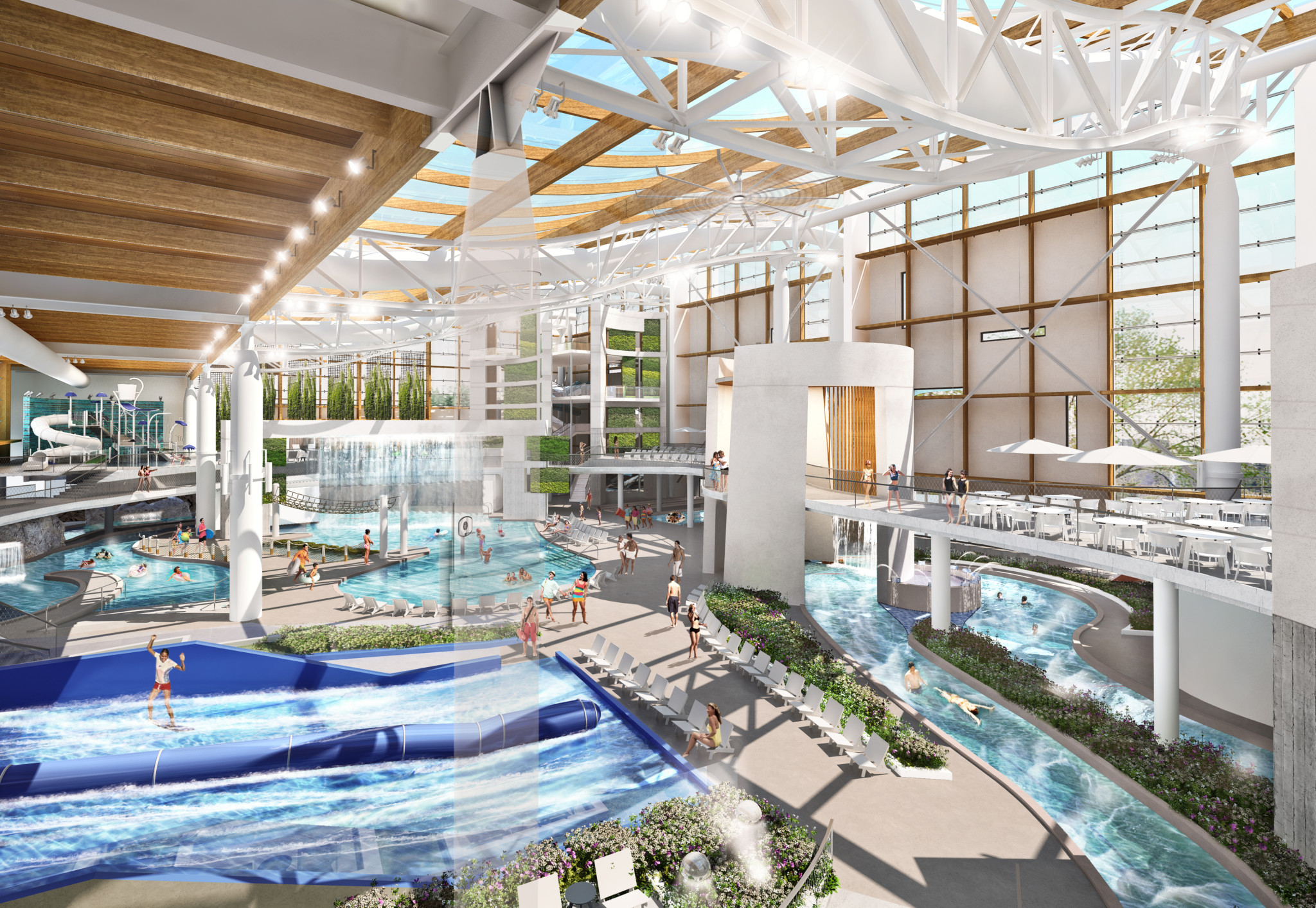 The proposed project includes nearly 111,000 square feet of upscale indoor water attractions and activities over three levels and another 106,000 square feet of outdoor water amenities. The Company retained renowned hospitality design firm Blur Workshop to develop the concept for the project, which will have dedicated indoor and outdoor recreation zones for adults, young children and families, as well as dining options and private cabana rentals. Adult guests will have exclusive access to adults-only indoor and outdoor pools, bars and lounging areas throughout the complex. The indoor attractions will be enclosed under a soaring atrium, a hallmark of the Gaylord Hotels brand, and surrounded by lush, tropical landscaping.

Year-round indoor attractions include an indoor slide tower with slides ranging from 32-to-46-feet tall, a double flow rider, rapid and lazy rivers, an activity pool with rock climbing and more features to be announced as the project progresses. Seasonal outdoor features include a 315,000 gallon wave pool with a giant LED movie screen, a 45.5-foot slide tower, an adults-only pool and a kids pool with a multi-level play structure. 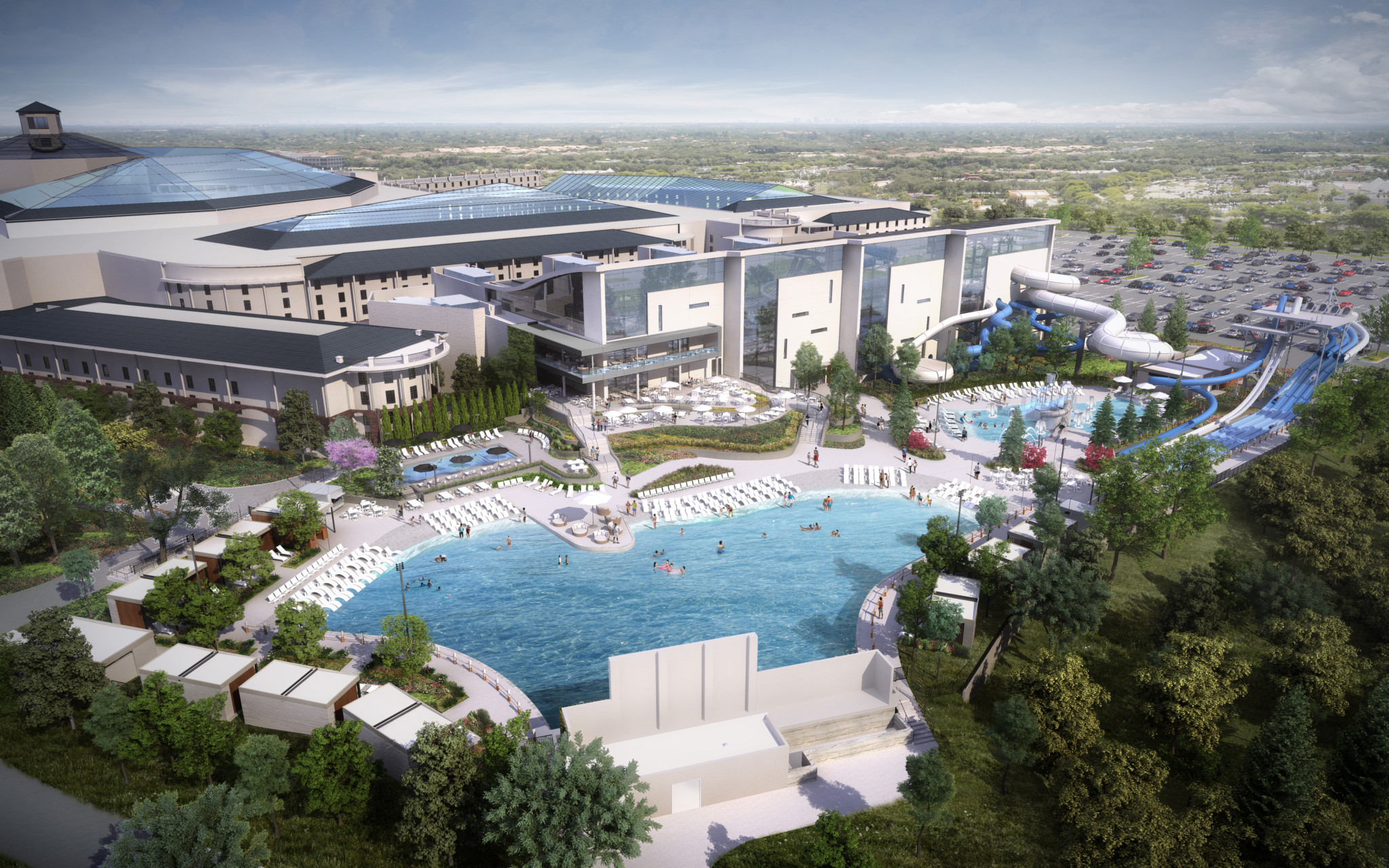 Colin Reed, chairman and chief executive officer of Ryman Hospitality Properties, said, “Gaylord Opryland has been a driving force for convention and leisure travel to the Nashville market for decades. We view this project as a tremendous opportunity to further cement Nashville’s must-visit status with a one-of-a-kind amenity that will appeal to group customers while also serving as a major demand inducer for families and adult leisure guests looking for upscale recreation options. We believe this project will drive increased outside-the-room spending and additional points of premium-rated transient occupancy by enticing visitors to extend their stay in Nashville.”

Tentatively slated to open in fall 2018, the SoundWaves project is estimated to generate significant economic impact for Metro Nashville and the State of Tennessee, according to an economic impact study conducted by Dr. William F. Fox at the University of Tennessee’s Boyd Center for Business and Economic Research. The study estimated that the proposed SoundWaves project will generate 1,287 full-time equivalent temporary jobs, $185 million in economic impact and a one-time increase of $8.4 million in state and local taxes during its planned 20-month construction phase.

According to the study, once the proposed project is operational, SoundWaves is expected to produce a total, annual economic output of $57.1 million, create 699 full-time equivalent jobs and increase state and local tax revenue by $4.6 million annually. These figures are in addition to Gaylord Opryland’s current estimated annual impact to the Tennessee economy of $866.5 million and $70.7 million in state and local tax revenue (based on 2015 tax data).

“Our city is fortunate to have a vibrant tourism and hospitality industry that creates quality jobs for residents and generates tax revenues that fund schools and other essential services,” said Nashville Mayor Megan Barry. “Continued investment in all areas of the city, such as the project Ryman Hospitality Properties is planning, is vital to our success as a welcoming city for tourists as well as an ideal place to live, work and play. This park, once completed, will not only create jobs and generate revenue at the Gaylord Opryland Resort & Convention Center but also will enhance and benefit the Donelson economy, especially along the Music Valley corridor.” 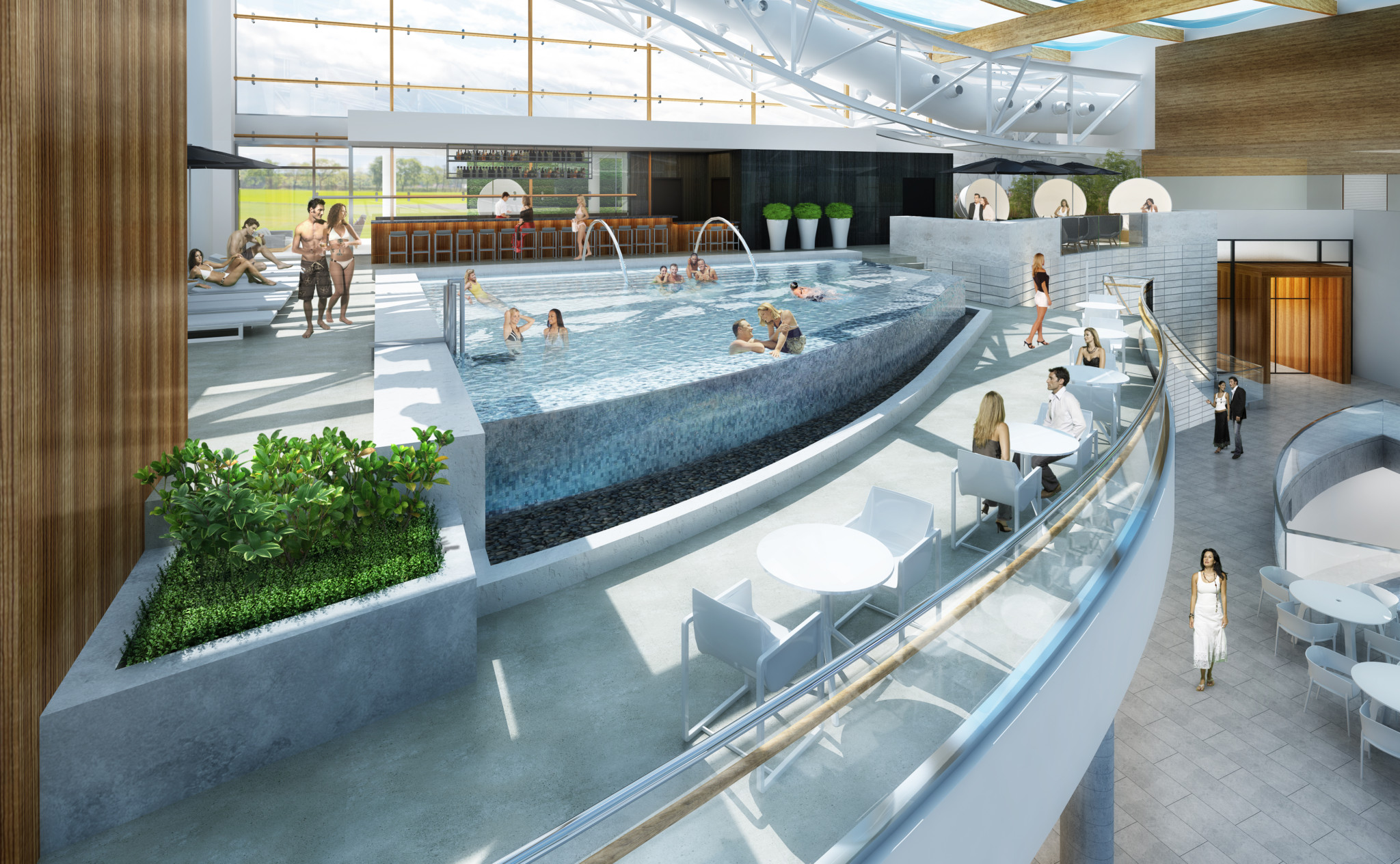 The proposed project’s $90 million cost will be funded with cash on hand and borrowings under the Company’s credit facility. The Company has requested that The Metropolitan Government of Nashville and Davidson County establish a payment in lieu of taxes, or PILOT, arrangement under which the real property taxes of the Gaylord Opryland Resort will, following the 2017 property tax reassessment, be capped at that new level for eight years. The Company also has requested that Metro Nashville extend the existing appropriation of the one percent hotel occupancy tax generated solely by the Gaylord Opryland Resort, established in 2010 for use in the Grand Ole Opry House flood repair and remediation efforts, for an additional six years to reimburse the Company for additional unreimbursed costs associated with these flood remediation efforts.

Reed continued, “As the second largest property taxpayer in Davidson County, the agreement we are seeking with Metro Nashville would afford our Company a measure of predictability with regards to future tax obligations on our Opryland parcel as well as the opportunity to, over time, offset some of our initial, upfront investment. The structure we are proposing makes it possible for us to make this significant $90 million capital investment in the Nashville area that will produce new jobs and generate substantial additional tax revenue for our state and local government.”

The Company has also proposed that it donate to Metro Nashville a parcel of land with direct access to the Cumberland River for use in the East Bank Greenway system as a launching area for personal watercraft and other water activities.

“This proposed land donation will provide a key access point to the Cumberland River for the Donelson community and all Nashville residents and visitors,” said District 15 Metro Nashville Council Member Jeff Syracuse. “This access is something Metro Parks and Ryman Hospitality Properties have wanted to make available to the public for some time, and I am thrilled that Ryman Hospitality Properties intends to make this donation for neighbors to enjoy as part of their continued investment in the Donelson area.”

Joe Kleimanhttp://wwww.themedreality.com
Raised in San Diego on theme parks, zoos, and IMAX films, InPark's Senior Correspondent Joe Kleiman would expand his childhood loves into two decades as a projectionist and theater director within the giant screen industry. In addition to his work in commercial and museum operations, Joe has volunteered his time to animal husbandry at leading facilities in California and Texas and has played a leading management role for a number of performing arts companies. Joe previously served as News Editor and has remained a contributing author to InPark Magazine since 2011. HIs writing has also appeared in Sound & Communications, LF Examiner, Jim Hill Media, The Planetarian, Behind the Thrills, and MiceChat His blog, ThemedReality.com takes an unconventional look at the attractions industry. Follow on twitter @ThemesRenewed Joe lives in Sacramento, California with his wife, dog, and a ghost.
Share
Facebook
Twitter
Linkedin
Email
Print
WhatsApp
Pinterest
ReddIt
Tumblr
Previous articleParques Reunidos Enters Asian Market With Management of Sun Group’s Dragon Park in Vietnam
Next articleRFP: Experienced firm sought to produce Giant Screen Marketing Symposium