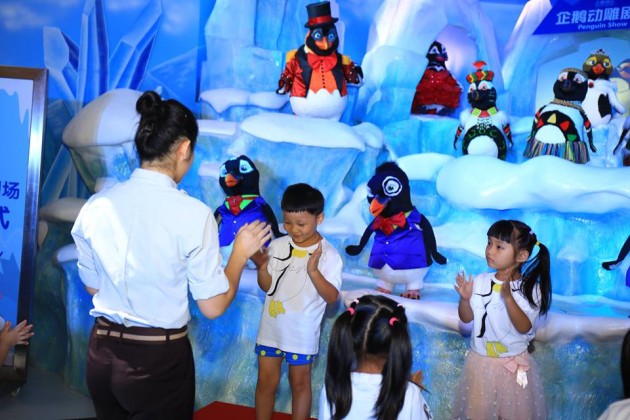 Jacksonville, FL, USA — PENGUINS ON PARADE is the newest attraction at Chimelong Zuhai Resort, home of the Ocean Kingdom theme park.  The two 8 1/2 minute musical revues delight and entertain people of all ages. The show is performed by 16 life-size animatronic penguins on a fanciful stage of sparkling, glistening ice nestled in the corner of the Emperor Penguin restaurant in Chimelong’s all new Penguin Hotel. The entire show was conceived, designed, built and installed by Sally Corporation of Jacksonville, Florida, USA.

The featured penguin characters hail from many faraway lands. Hailing from Antarctica is MC Peng, the emperor penguin master of ceremonies; Miss Isabelle, the lovely, silver-voiced ingénue is from New Zealand; Madame Wobbles, the grand diva gentoo penguin, and her partner Sir Auk, a bird-brained, pompous baritone macaroni penguin, are both from the Falkland Islands; and last but not least is Little Blue, a cute, young, energetic and ambitious little blue penguin from Australia who wants to become a star. 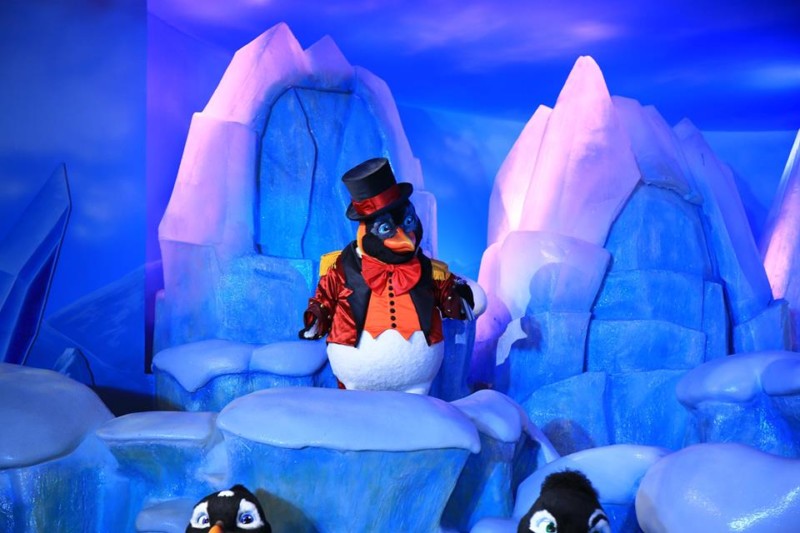 These, and many other penguins in this talented cast of showbiz birds, sing and dance to originally composed music and lyrics featuring such songs as the title hit It’s Perfect To Be A Penguin and the audience participation numbeer The Penguin Shuffle. Each penguin wears a custom designed and constructed costume specially made for this production.

“After completing the “White Tiger Mountain” show for Chimelong Paradise we were asked to create another show for the new Penguin Hotel at the award winning Ocean Kingdom Resort. We worked with the talented team of designers at Bruce Robinson and Associates to create the ice castle setting and compose the production. After writing and producing all soundtracks, the entire production was translated into Mandarin and talent was brought in from around the Guangzhou area to bring the appropriate personalities to our characters,” said John Wood, CEO of Sally Corporation.  “We love it when our customers keep coming back for more of Sally’s magic. We look forward to doing even greater things for them in the years to come.”

Throughout the two shows, CGI video accompanies the musical sequences with cartoon penguins and humorous visuals, and is shown via a large monitor encased in the ice center stage. In each of the two productions three sets of penguins sing wonderful songs based upon the country of their origin. All of this is brought to exciting life by a dazzling theatrical light show which enhances the moods and atmospheres of the various musical numbers. 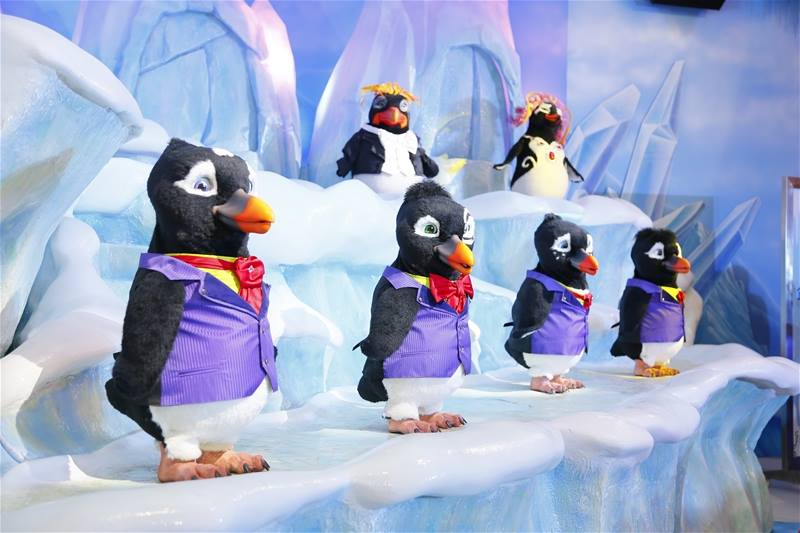 In addition to the main two shows there are also five mini-shows — each no longer than 1 1/2 minutes — which are performed daily.

And there’s still another special treat – When the other shows aren’t running, a guest may place his or her hand in a handprint on the ice stage and start a special encore performance of the very popular Penguin Shuffle.

Joe Kleimanhttp://wwww.themedreality.com
Raised in San Diego on theme parks, zoos, and IMAX films, InPark's Senior Correspondent Joe Kleiman would expand his childhood loves into two decades as a projectionist and theater director within the giant screen industry. In addition to his work in commercial and museum operations, Joe has volunteered his time to animal husbandry at leading facilities in California and Texas and has played a leading management role for a number of performing arts companies. Joe previously served as News Editor and has remained a contributing author to InPark Magazine since 2011. HIs writing has also appeared in Sound & Communications, LF Examiner, Jim Hill Media, The Planetarian, Behind the Thrills, and MiceChat His blog, ThemedReality.com takes an unconventional look at the attractions industry. Follow on twitter @ThemesRenewed Joe lives in Sacramento, California with his wife, dog, and a ghost.
Share
Facebook
Twitter
Linkedin
Email
Print
WhatsApp
Pinterest
ReddIt
Tumblr
Previous articleVideo Game Company Ubisoft Developing Theme Park in Malaysia
Next articleUnited Parks Becomes Owner of Daytona Lagoon Waterpark