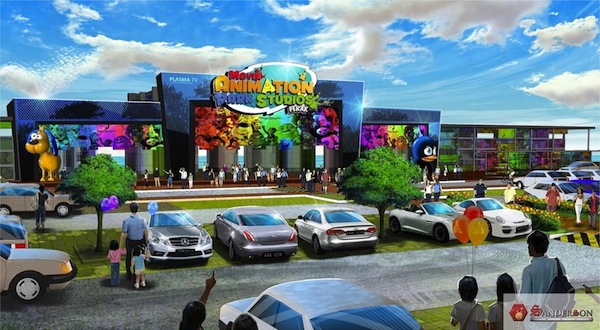 Perak Mentri Besar Datuk Seri Dr Zambry Abdul Kadir said the joint venture project between Silver Corp Berhad and Sanderson Group, which is to be completed by December next year, will have a compilation of a variety animation concept zones, including Square Animation, Fantasy Forest, Live Action, Blast Off, DreamWorks and Lakeside Zone.

“The project will create some 3,000 employment opportunities, including 700 main jobs for the locals. The mega international project will introduce the animated character that is on TV such as The Croods, Megamind, Mr. Peabody and Sherman and Casper the Friendly Ghost. MAPS is the largest international project,” he told reporters after the groundbreaking ceremony at Aman Jaya Convention Center Jaya in Ipoh, Sunday.

Zambry said the project, being strategically located on 10 of the 20.8 hectares of land in Ipoh, and equipped with electric train services (ETS) on the North-South bound expressway is set to draw 1.4 million visitors to the state.

“We are targeting 80 percent of domestic visitors, with the rest from foreign tourists,” he said.

Joe Kleimanhttp://wwww.themedreality.com
Raised in San Diego on theme parks, zoos, and IMAX films, InPark's Senior Correspondent Joe Kleiman would expand his childhood loves into two decades as a projectionist and theater director within the giant screen industry. In addition to his work in commercial and museum operations, Joe has volunteered his time to animal husbandry at leading facilities in California and Texas and has played a leading management role for a number of performing arts companies. Joe previously served as News Editor and has remained a contributing author to InPark Magazine since 2011. HIs writing has also appeared in Sound & Communications, LF Examiner, Jim Hill Media, The Planetarian, Behind the Thrills, and MiceChat His blog, ThemedReality.com takes an unconventional look at the attractions industry. Follow on twitter @ThemesRenewed Joe lives in Sacramento, California with his wife, dog, and a ghost.
Share
Facebook
Twitter
Linkedin
Email
Print
WhatsApp
Pinterest
ReddIt
Tumblr
Previous article
US Pavilion at Milano 2015 Announces Website and Signing of Four Key Partners
Next article
Sally Corporation’s Jan Sherman Retiring After 32 Years