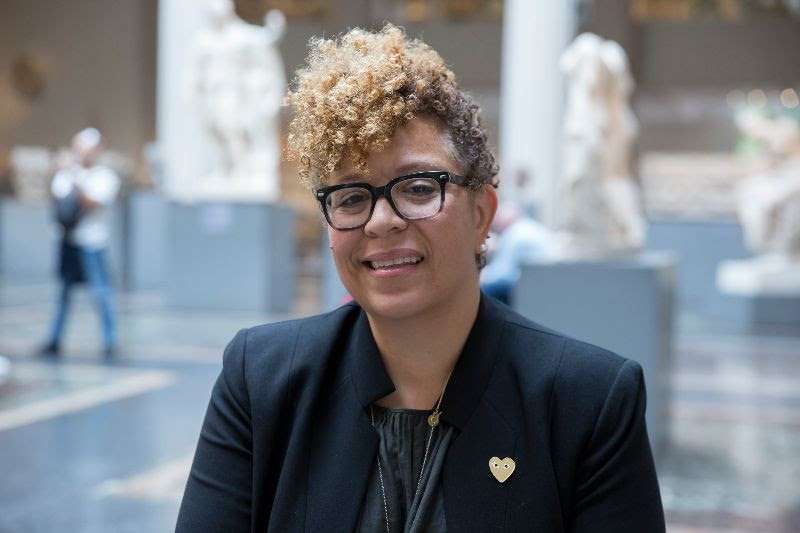 Oct 30, 2019 — The Board of Directors of the Lucas Museum of Narrative Art, including co-founders George Lucas and Mellody Hobson, announced today that Sandra Jackson-Dumont has been appointed the museum’s director and chief executive officer. Tasked with leading the institution through its opening and beyond, Jackson-Dumont will be joining the Lucas Museum in January 2020. She comes to the museum from the Metropolitan Museum of Art in New York City, where she has served as the Frederick P. and Sandra P. Rose Chairman of Education and Public Programs since 2014.

“I am honored to lead the Lucas Museum,” said Jackson-Dumont. “This is a fantastic opportunity to join an ambitious organization at a crucial time in its founding and development. With an expansive collection devoted to the art of storytelling, the Lucas Museum will be an innovative place of relevance and inspiration. I am looking forward to partnering with the board, Lucas Museum colleagues, artists, and communities to establish and build this unique institution.”

“The work that Sandra has done throughout her extensive museum career is impressive and we look forward to her leadership,” said George Lucas, co-founder of the Lucas Museum, philanthropist, and filmmaker. “We want the Lucas Museum to be a vital resource for our community and we believe Sandra will help us achieve that goal.”

“Education is at the core of our mission, so it’s fitting that the director of the Lucas Museum be a deeply experienced museum educator,” said Mellody Hobson, co-founder of the Lucas Museum and co-CEO and president of Ariel Investments. “Sandra has more than two decades of experience in the field, and we believe she is the leader who will help bring our vision of creating an inspiring and accessible museum to life.”

At the Lucas Museum, Jackson-Dumont will oversee wide-ranging curatorial and education programs and will manage a staff of more than 230 by the time the museum opens. She will lead the curatorial, museum experience, education, and collections management teams in exploring the more than 100,000 works of art in the collections—including original illustrations, paintings, comic art, photography, and the arts of filmmaking—and developing exhibitions and programs in the museum’s extensive gallery and classroom spaces. The Lucas Museum broke ground in March 2018 in L.A.’s Exposition Park, and Jackson-Dumont will also work with the operations, architecture, and construction teams to continue to bring architect Ma Yansong’s vision for the 11-acre campus and 300,000-square-foot building to life. Jackson-Dumont will report to the Lucas Museum’s Board of Directors.

Throughout her career, Jackson-Dumont has developed programming around museum collections and special exhibitions to engage a broad range of audiences, from school-age children and their teachers to artists and scholars. At The Met, Jackson-Dumont has conceived of and managed an array of dynamic public programs, community engagement and academic initiatives, and live arts performances for diverse audiences.

“Since joining The Met, Sandra has been an unwavering champion of the museum’s mission to connect people with art and culture and we wish her all the best for her next, exciting challenge,” said Max Hollein, director of The Met. “She has shaped the landscape of this field, and we look forward to carrying on the many successful initiatives she led here.”

Jackson-Dumont also served for eight years as the deputy director for education and public programs and adjunct curator in modern and contemporary art at the Seattle Art Museum. There, she oversaw educational public programs, interpretive technology, and community affairs across all three venues as well as organized significant exhibitions and collaborative projects on the work of Theaster Gates, Titus Kaphar, LaToya Ruby Frazier, and Sondra Perry, among others. Prior to that, Jackson-Dumont held positions at the Studio Museum and the Whitney Museum of American Art in New York City. A native of San Francisco, Jackson-Dumont received her B.A. in art history from Sonoma State University in California and her M.A. in art history from Howard University in Washington, D.C.

Joe Kleimanhttp://wwww.themedreality.com
Raised in San Diego on theme parks, zoos, and IMAX films, InPark's Senior Correspondent Joe Kleiman would expand his childhood loves into two decades as a projectionist and theater director within the giant screen industry. In addition to his work in commercial and museum operations, Joe has volunteered his time to animal husbandry at leading facilities in California and Texas and has played a leading management role for a number of performing arts companies. Joe previously served as News Editor and has remained a contributing author to InPark Magazine since 2011. HIs writing has also appeared in Sound & Communications, LF Examiner, Jim Hill Media, The Planetarian, Behind the Thrills, and MiceChat His blog, ThemedReality.com takes an unconventional look at the attractions industry. Follow on twitter @ThemesRenewed Joe lives in Sacramento, California with his wife, dog, and a ghost.
Share
Facebook
Twitter
Linkedin
Email
Print
WhatsApp
Pinterest
ReddIt
Tumblr
Previous articleBungalow Scenic Studios creates immersive holiday attractions for Gaylord Resorts
Next articleSmart Monkeys promotes Jason Pontius to Director of Operations