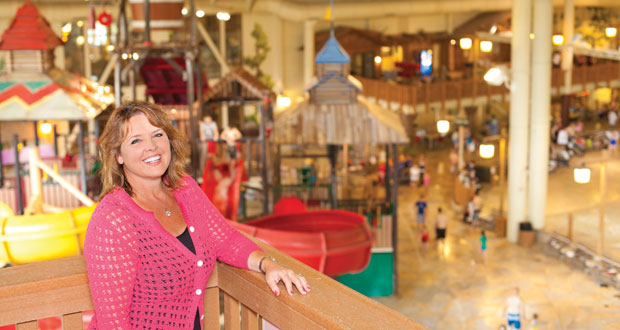 Two Bit Circus, an experiential entertainment company, today announced that Kimberly Schaefer has joined the company as the lead of its location-based entertainment and micro-amusement park business.

In this role, Schaefer will be responsible for the development, management, and execution of the recently announced next generation micro-amusement parks.

Schaefer brings to Two Bit Circus nearly 18 years of real estate entertainment experience as CEO of Great Wolf Lodge. She was instrumental in the expansion of the company, growing it from one cabin to 15-mega indoor waterpark resorts. Schaefer also played an integral role in the company’s transition from a public organization to a private one. She plans to remain on the board. A CPA by education, Kim started in the lodging industry as controller for a hotel in Madison, Wisconsin and eventually found her way to Great Wolf Lodge. She is a graduate of Edgewood College.

“Kim has been an advisor to the Company since we first pitched our tent,” said Two Bit Circus CEO and Co-founder, Brent Bushnell. “We could not dream of a better addition to our executive team and lead for our location-based entertainment business. Her impressive range coupled with our roboticists, engineers, and carneys creates a dangerously productive team.”

Joe Kleimanhttp://wwww.themedreality.com
Raised in San Diego on theme parks, zoos, and IMAX films, InPark's Senior Correspondent Joe Kleiman would expand his childhood loves into two decades as a projectionist and theater director within the giant screen industry. In addition to his work in commercial and museum operations, Joe has volunteered his time to animal husbandry at leading facilities in California and Texas and has played a leading management role for a number of performing arts companies. Joe previously served as News Editor and has remained a contributing author to InPark Magazine since 2011. HIs writing has also appeared in Sound & Communications, LF Examiner, Jim Hill Media, The Planetarian, Behind the Thrills, and MiceChat His blog, ThemedReality.com takes an unconventional look at the attractions industry. Follow on twitter @ThemesRenewed Joe lives in Sacramento, California with his wife, dog, and a ghost.
Share
Facebook
Twitter
Linkedin
Email
Print
WhatsApp
Pinterest
ReddIt
Tumblr
Previous articleVideotel’s VP71 Media Player Providing Digital Signage at GameWorks Las Vegas
Next articleDetails Announced for “VR Showdown in Ghost Town” at Knott’s Berry Farm