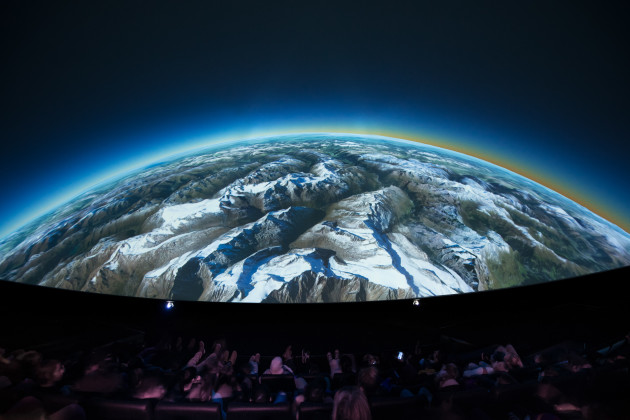 Stockholm, Sweden and Chicago, IL, USA (March 2, 2015) — On March 5th, the first Kavli Prize Lecture “Tales from the Outer Solar System” by 2012 Kavli Prize Laureate in Astrophysics, Michael E. Brown, will take place at the Adler Planetarium in Chicago. The presentation, which will be held and visualized in the planetarium, will be broadcasted live to three other dome theaters in the United States. The sharing technology, called “domecasting”, is a unique feature introduced by dome theater company Sciss.

The Kavli Prize Lecture will be domecasted live to the planetariums of Denver Museum of Nature and Science, the Peoria Riverfront Museum, and the Flandrau Science Center in Tucson, Arizona. This means that their audiences will see the same imaging on their dome screen, while listening to the audio stream of Michael E. Brown’s presentation.

Sciss introduced domecasting already in 2008, which made it possible for the portable domes of Minnesota Planetarium to share presentations simultaneously. With the new software release of Uniview 2.0, the domecasting capability is enhanced further. It is now more automated, and easier to use. Domecasting can be used by Sciss’s Colorspace theaters or other theaters that have the Uniview planetarium software integrated into their system.

“We see a great potential in sharing knowledge and experiences this way and that’s why we wanted to make it more available and simple. We have over 140 planetariums all over the world using the Uniview software. This means, for example, that a small planetarium at a high school can collaborate with any of our domes around the world. In the quest to spread knowledge and to optimize educational outreach, this is a huge possibility for all our venues. I think it’s a worthy example of what a modern planetarium, dome theater or auditorium can offer its community”, says Staffan Klashed, CEO and founder of Sciss.

Joe Kleimanhttp://wwww.themedreality.com
Raised in San Diego on theme parks, zoos, and IMAX films, InPark's Senior Correspondent Joe Kleiman would expand his childhood loves into two decades as a projectionist and theater director within the giant screen industry. In addition to his work in commercial and museum operations, Joe has volunteered his time to animal husbandry at leading facilities in California and Texas and has played a leading management role for a number of performing arts companies. Joe previously served as News Editor and has remained a contributing author to InPark Magazine since 2011. HIs writing has also appeared in Sound & Communications, LF Examiner, Jim Hill Media, The Planetarian, Behind the Thrills, and MiceChat His blog, ThemedReality.com takes an unconventional look at the attractions industry. Follow on twitter @ThemesRenewed Joe lives in Sacramento, California with his wife, dog, and a ghost.
Share
Facebook
Twitter
Linkedin
Email
Print
WhatsApp
Pinterest
ReddIt
Tumblr
Previous articleJackson Hole Wildlife Film Festival Opens Call for Entries for 2015 Fest
Next articleThe Republic Interactive Themed Experience Launches Kickstarter Campaign