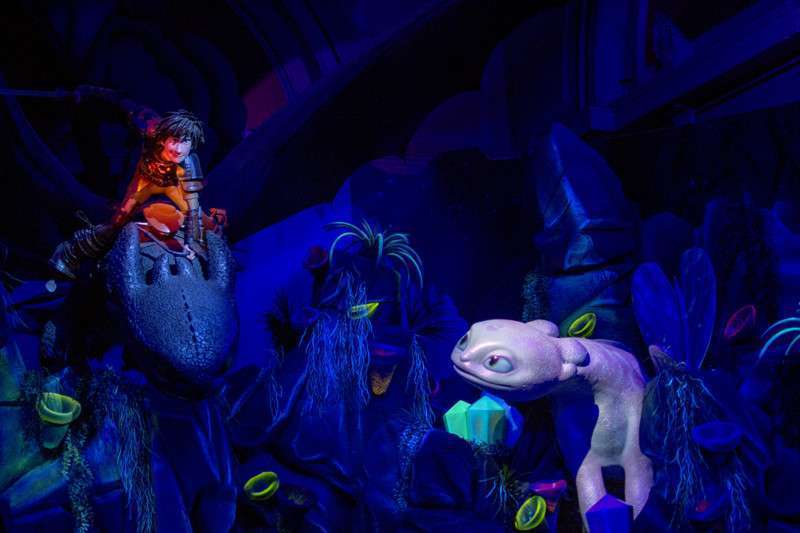 Shrek’s Adventure in London has added Toothless’ love interest Light Fury to its cast as part of their dragon utopia following the launch of the release of How to Train Your Dragon: The Hidden World.

Scruffy Dog’s production division teamed up with Merlin Entertainment, to design, build and install the world’s first look at Light Fury, complemented by an ambitious set, including UV flowers and rock and replica scaled IP items from the movie.

Other characters from How to Train Your Dragon: The Hidden World like Toothless, Viking Chief of Berk and Hiccup can be seen at Shrek’s Adventure.

This is the first IP Project for Production Director Dylan Lardner Burke, since leaving Warner Bros World, Abu Dhabi, he comments “It’s always a pleasure to work with Merlin, they have such a great portfolio of attractions and brands, and we were thrilled to be given the opportunity to create the additional character Light Fury, as well the extension of the already incredibly set.”

He follows, “The initial idea came from Merlin, which we then developed, working closely with Merlin to finalise. Once the concept was approved it was all hands on deck to complete the project as we had challenging deadlines both in production and on the site installation. With the help of the Merlin staff, and our dedicated team, we managed to complete the project within 6 weeks from IP / client approval to a high standard and I am very pleased with the outcome.”

Joe Kleimanhttp://wwww.themedreality.com
Raised in San Diego on theme parks, zoos, and IMAX films, Joe Kleiman would expand his childhood loves into two decades as a projectionist and theater director within the giant screen industry. In addition to his work in commercial and museum operations, Joe has volunteered his time to animal husbandry at leading facilities in California and Texas and has played a leading management role for a number of performing arts companies. Joe has been News Editor and contributing author to InPark Magazine since 2011. HIs writing has also appeared in Sound & Communications, LF Examiner, Jim Hill Media, and MiceChat. His blog, ThemedReality.com takes an unconventional look at the attractions industry. Follow on twitter @ThemesRenewed Joe lives in Sacramento, California with his fiancé, two dogs, and a ghost.
Share
Facebook
Twitter
Linkedin
Email
Print
WhatsApp
Pinterest
ReddIt
Tumblr
Previous articleTwo new documents from the 8K Association now available online
Next articleParis Las Vegas adds $1.7 million light show to resort’s Eiffel Tower