During an all-hands employee meeting at the San Diego Zoo (Friday, Jan. 12, 2018), philanthropist T. Denny Sanford announced that he is making a $30 million donation—the largest single gift the San Diego Zoo has ever received. This generous gift will go toward the estimated $69 million cost of constructing a brand-new, completely reimagined children’s zoo, to be named The Sanford Children’s Zoo.

“This project is the most ambitious ever undertaken at the San Diego Zoo and will result in a one-of-a-kind children’s zoo for the 21st Century,” said Mark Stuart, president of the Foundation of San Diego Zoo Global. “Denny Sanford’s philanthropy is all about making the world a better place for children. Thanks to his transformational investment, San Diego will have the very best children’s zoo in the world.”

When the San Diego Zoo’s current Children’s Zoo first opened in 1957, it was considered advanced for its time. However, when the new Sanford Children’s Zoo is completed, this reimagined 2.3-acre space will give kids greater opportunities to discover the natural world through play, and will be designed in ways to help children develop empathy and better understand and identify with wildlife. 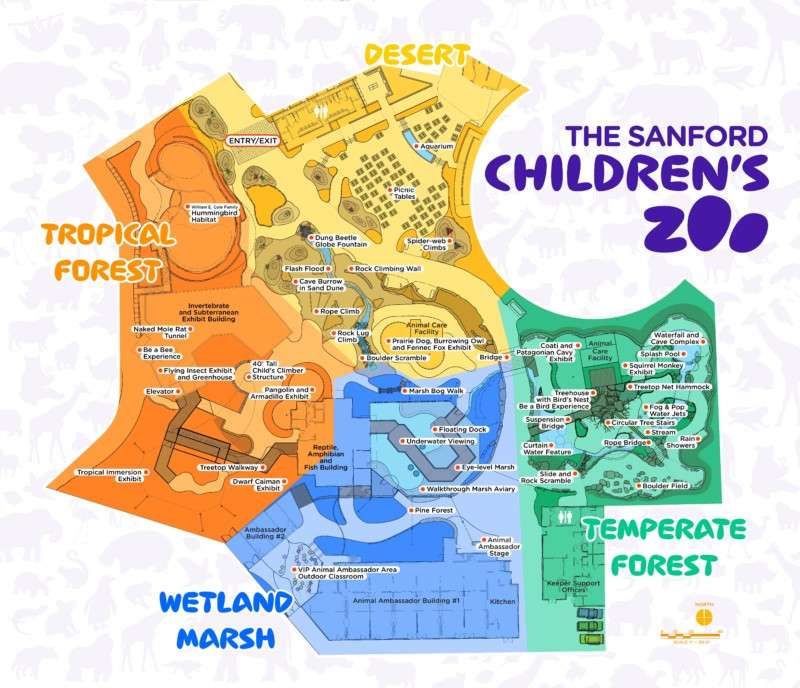 More than 100 species will reside in the new children’s zoo, families will be able to venture through four ecosystems—communities of plants and animals that have unique adaptations for their environment. In each region, children will learn about the animals and their environments in ways that awaken their senses and inspire creativity, exploration, and empathy for nature through play.

“Since so many children have little or no access to nature, the new Sanford Children’s Zoo will provide them with a unique and engaging outdoor adventure where they will learn about animals and their homes as they play,” said Debra Erickson, director of communications, San Diego Zoo Global. “During their exciting, ever-changing adventures, they will begin developing an empathy and concern for animals and plants which will lay the groundwork for their future involvement in conservation.”

As part of the announcement, Sanford officially unveiled The Sanford Children’s Zoo Visitor’s Pavilion, located on the walkway outside the Children’s Zoo. This new pavilion will give visitors and Zoo members the opportunity to find out more about plans for the Sanford Children’s Zoo project, see renderings of what the area will look like, and view an 8- by 5-foot model showing each of the four unique ecosytems that will be created for children and their families to explore.

Sanford has long been a generous supporter of the San Diego Zoo, and he is the largest donor in  cumulative gifts to San Diego Zoo Global. In 2013, Sanford funded San Diego Zoo Kids—an innovative television channel with programs produced primarily for medical facilities that serve pediatric patients and their families. San Diego Zoo Kids’ programming offers family friendly, animal-oriented stories that are both entertaining and educational. The channel debuted in 2013 at Rady Children’s Hospital in San Diego. Since then, it has been installed in 119 children’s hospitals and Ronald McDonald Houses in 31 states across the U.S. and the District of Columbia, as well as facilities in Mexico, Canada, Australia, and Pakistan—and it continues to grow.

A fundraising campaign for the new children’s zoo will start immediately. Based on the success of this effort, it is anticipated that the current Children’s Zoo will close in January 2019, as construction begins on the new Sanford Children’s Zoo, which is expected to be completed in spring 2021. To learn more about The Sanford Children’s Zoo project or make a donation, visit sandiegozoo.org/childrenszoo.

Joe Kleimanhttp://wwww.themedreality.com
Raised in San Diego on theme parks, zoos, and IMAX films, InPark's Senior Correspondent Joe Kleiman would expand his childhood loves into two decades as a projectionist and theater director within the giant screen industry. In addition to his work in commercial and museum operations, Joe has volunteered his time to animal husbandry at leading facilities in California and Texas and has played a leading management role for a number of performing arts companies. Joe previously served as News Editor and has remained a contributing author to InPark Magazine since 2011. HIs writing has also appeared in Sound & Communications, LF Examiner, Jim Hill Media, The Planetarian, Behind the Thrills, and MiceChat His blog, ThemedReality.com takes an unconventional look at the attractions industry. Follow on twitter @ThemesRenewed Joe lives in Sacramento, California with his wife, dog, and a ghost.
Share
Facebook
Twitter
Linkedin
Email
Print
WhatsApp
Pinterest
ReddIt
Tumblr
Previous article
World’s Longest VR Coaster to Premiere on Vegas Strip
Next article
Vancouver Aquarium to End Display of Whales and Dolphins