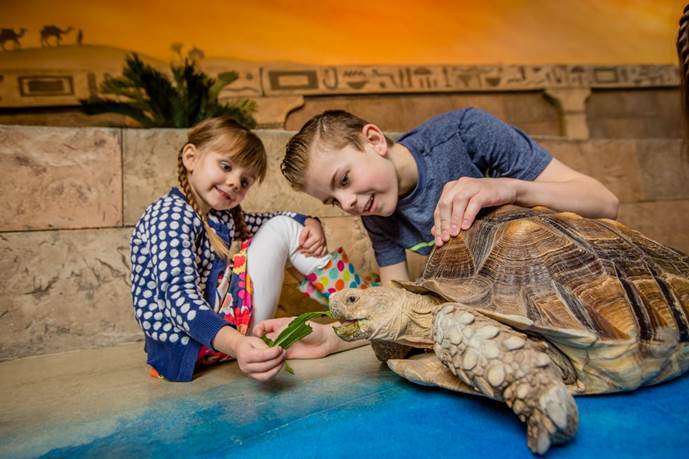 The Galleria at Fort Lauderdale, recognized as Fort Lauderdale’s premier shopping destination, has announced SeaQuest Fort Lauderdale will open during late 2018 as one of the newest additions to its popular mix of retail and dining offerings. The hands-on global sea life education and entertainment experience for all ages will reside in a 23,000-square-foot home at the east end of The Galleria near H & M and the soon to open Powerhouse Gym.

SeaQuest Fort Lauderdale will be home to a variety of animal species from across the globe. Designed as a “Quest of Edutainment,” visitors to SeaQuest Fort Lauderdale will journey through realistically themed environments where they will connect with the animals through various hands-on encounters such as feeding sharks and stingrays plus they can interact with capybara, Asian small-clawed otters, giant Sulcata tortoises, exotic bird species and other creatures along the way.

SeaQuest is already enjoying success in Layton, Utah; Las Vegas, Nevada; Fort Worth, Texas and Littleton, Colorado with an additional location under construction in Folsom, California. The Galleria at Fort Lauderdale will be the company’s sixth location and only Florida home.

“SeaQuest is very excited to build upon our ongoing success with the future opening of our first Florida location at The Galleria at Fort Lauderdale,” said Vince Covino, SeaQuest CEO. “We look forward to introducing our one-of-a-kind Quest that allows guests to experience animals from around the world in a top resort destination such as Fort Lauderdale.”

SeaQuest Fort Lauderdale, a family fun attraction, is just one of many new and exciting developments transforming The Galleria at Fort Lauderdale. A recent renovation program introduced a new color scheme, modernized soft seating areas and updated restrooms plus new stores such as Mimmic Bijuterias, Bbungalow and Apricot Lane.

The Galleria’s Palm Court Market now offers award-winning local dessert company Stefano Versace Gelato with Stewart’s Restaurant opening soon. This summer, Powerhouse Gym, a fitness industry leader with success in 39 states across the country and more than 300 locations throughout the world, will open its first Broward-Miami-Dade location. The 15,000-square-foot Cooper’s Hawk Winery & Restaurants, a Napa-inspired eatery with a full bar, a winery-inspired private party space and an artisan retail market, will offer shoppers another full-service dining option when it opens during early 2019.

For more information about The Galleria at Fort Lauderdale, or for a complete list of retailers, visit www.galleriamall-fl.com.

Joe Kleimanhttp://wwww.themedreality.com
Raised in San Diego on theme parks, zoos, and IMAX films, Joe Kleiman would expand his childhood loves into two decades as a projectionist and theater director within the giant screen industry. In addition to his work in commercial and museum operations, Joe has volunteered his time to animal husbandry at leading facilities in California and Texas and has played a leading management role for a number of performing arts companies. Joe has been News Editor and contributing author to InPark Magazine since 2011. HIs writing has also appeared in Sound & Communications, LF Examiner, Jim Hill Media, and MiceChat. His blog, ThemedReality.com takes an unconventional look at the attractions industry. Follow on twitter @ThemesRenewed Joe lives in Sacramento, California with his fiancé, two dogs, and a ghost.
Share
Facebook
Twitter
Linkedin
Email
Print
WhatsApp
Pinterest
ReddIt
Tumblr
Previous articleNotice of upcoming GSCA conference deadlines
Next articleAECOM to utilize Super 78’s Mushroom VR platform for program management services in Asia-Pacific market