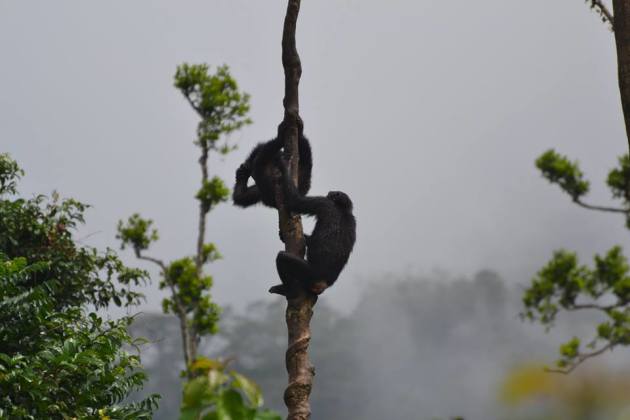 Orlando, Fla. (October 17, 2014) – Fifty-seven wildlife conservation projects around the world are receiving much needed funding from the SeaWorld & Busch Gardens Conservation Fund this year. Just over $1 million is being distributed among these projects bringing the amount awarded since the Fund was created in 2003, to more than $11 million.

A majority of the grants awarded this year, and every year, are for projects with defined timelines and long-term objectives and goals, but occasionally the Fund receives requests for crisis grants when conservation organizations are faced with unforeseeable challenges.

In late August the Tacugama Chimpanzee Sanctuary in Sierra Leon, west Africa submitted a crisis grant for funding. The Sanctuary is a non-profit organization established in 1995 to rehabilitate orphaned or abandoned chimpanzees with the goal of releasing them back into their natural habitat. A portion of the Sanctuary’s expenses are typically covered by income generated by visitors to the sanctuary and its eco-lodges.

However, due to the devastating Ebola outbreak that was confirmed in Sierra Leon in May and the resulting drop in tourism to the area, the Sanctuary’s funding was negatively impacted and the care of the chimpanzees jeopardized. The SeaWorld & Busch Gardens Conservation Fund board reviewed and approved the crisis grant request and provided financial support to offset their funding issues.

Painted dogs, also known as wild African dogs, are among Africa’s most endangered species. One of the biggest threats they face is poaching for bush meat. An organization called Painted Dog Conservation has formed anti-poaching units that patrol 10,500 square kilometers in Zimbabwe, removing snares laid by poachers.  The Fund has supported the organization by providing funding for these small, yet highly trained groups.

“The support from SeaWorld and Busch Gardens remains pivotal to the success of Painted Dog Conservation,” said Peter Biliston, Managing Director of Painted Dog Conservation in Zimbabwe. “The fact that they have supported our anti-poaching units for many years shows that they really understand the complexity of wildlife conservation. They understand that permanent change does not happen overnight and it takes long-term committed support to make a difference.”

African penguins, one of 17 penguin species, are classified as endangered and their numbers are in rapid decline. The wild population is down to 2 percent of the original 1 million breeding pairs counted in 1930. A group called SANCCOB in South Africa works to rehabilitate adult penguins, to raise abandoned chicks to increase the wild population. Research indicates that the wild African penguin population is 19 percent higher entirely due to SANCCOB’s oiled wildlife response efforts. The Fund has supported SANCCOB not only with financial support, but has also sent aviculturists from SeaWorld to South Africa to assist with penguin rehabilitation.

The Caribbean coast of Costa Rica is the world’s fourth most important nesting beach for critically endangered leatherback sea turtles. Without protection from illegal harvesting and other threats, 80 percent of leatherback sea turtle nests are lost. The Ecology Project International organization will protect leatherback populations by working to reduce the illegal harvest of nests and improving nesting habitats. They also will work with Costa Rican teachers and students to increase their ecological knowledge so they can better understand their role in the long term survival of leatherbacks and conservation in general.

For more information on the SeaWorld & Busch Gardens Conservation Fund and the other projects supported by the Fund, like the Fund on Facebook.

Joe Kleimanhttp://www.themedreality.com
Raised in San Diego on theme parks, zoos, and IMAX films, Joe Kleiman would expand his childhood loves into two decades as a projectionist and theater director within the giant screen industry. In addition to his work in commercial and museum operations, Joe has volunteered his time to animal husbandry at leading facilities in California and Texas and has played a leading management role for a number of performing arts companies. Joe has been News Editor and contributing author to InPark Magazine since 2011. HIs writing has also appeared in Sound & Communications, LF Examiner, Jim Hill Media, and MiceChat. His blog, ThemedReality.com takes an unconventional look at the attractions industry. Follow on twitter @themedreality Joe lives in Sacramento, California with his fiancé, two dogs, and a ghost.
Share
Facebook
Twitter
Linkedin
Email
Print
WhatsApp
Pinterest
ReddIt
Tumblr
Previous articleResorts World Sentosa’s Animal Operations Receive AZA Accredidation
Next articleRescued Grizzly Bears to Occupy Newly Renovated Habitat at Central Park Zoo