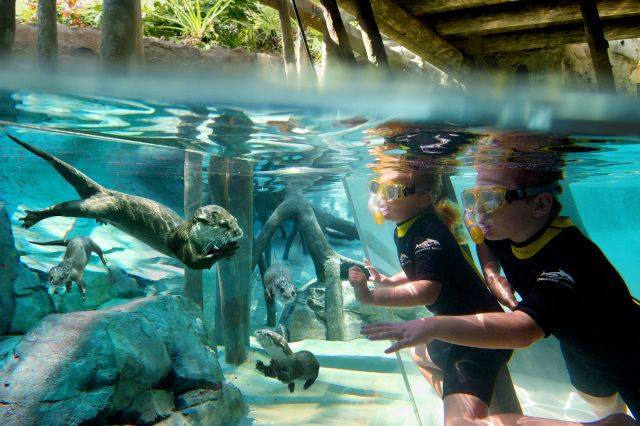 “Jim is an outstanding theme park leader who has led excellence, performance and growth in Tampa.  I am pleased to now have him at the helm of our flagship operations in Orlando,” said Joel Manby, President and Chief Executive Officer of SeaWorld Entertainment, Inc.  “The Busch Gardens Tampa Bay parks will gain a proven and innovative leader, as Stewart’s operations and zoological expertise has contributed to more than a decade of acclaimed guest experience at Discovery Cove.”

Jim Dean started his career as a financial analyst in the corporate headquarters of Anheuser-Busch (A-B) in St. Louis, Mo.  He transferred to Busch Gardens Tampa Bay as finance manager in 1990 and Sesame Place in Langhorne, Pa. in 1993 as finance vice president.  Dean accepted the head of finance position with A-B’s European trade office in London in 2000 before returning to the U.S. five years later as vice president of accounting for the U.S. brewing division of A-B.  He moved back to the company’s theme parks in 2008 as head of corporate finance before accepting the role of park president for Busch Gardens Tampa Bay and Adventure Island in 2010. Dean holds an engineering degree from Memphis State University and an MBA from St. Louis University.

Stewart Clark started his career with SeaWorld in 1983 and brings more than 30 years of zoological and theme park leadership experience. During his career, Clark served in five parks including Busch Gardens Tampa Bay. Most recently, Clark served as the Vice President of Discovery Cove and was instrumental in developing Discovery Cove’s interactive programs, animal exhibits, and culture of customer service excellence. Clark earned a Bachelor of Arts degree in applied behavior and organizational management from National-Louis University and currently serves as the Chair of the Alliance of Marine Mammal Parks and Aquariums.

Donnie Mills, current park president of the Orlando parks has announced his retirement after 42 years of dedicated service with the company.

“Donnie has made a lasting contribution to our parks and our people by serving as park president in three of our six markets, leading the operations team and instilling a culture committed to the highest levels of operational execution across this great company,” Manby said.

Joe Kleimanhttp://wwww.themedreality.com
Raised in San Diego on theme parks, zoos, and IMAX films, Joe Kleiman would expand his childhood loves into two decades as a projectionist and theater director within the giant screen industry. In addition to his work in commercial and museum operations, Joe has volunteered his time to animal husbandry at leading facilities in California and Texas and has played a leading management role for a number of performing arts companies. Joe has been News Editor and contributing author to InPark Magazine since 2011. HIs writing has also appeared in Sound & Communications, LF Examiner, Jim Hill Media, and MiceChat. His blog, ThemedReality.com takes an unconventional look at the attractions industry. Follow on twitter @ThemesRenewed Joe lives in Sacramento, California with his fiancé, two dogs, and a ghost.
Share
Facebook
Twitter
Linkedin
Email
Print
WhatsApp
Pinterest
ReddIt
Tumblr
Previous articleLightswitch Brings Descanso Gardens’ Forest of Light to Vivid Life with MA onPC Systems
Next articleCarnival Announces Comprehensive Technology Based Guest Experience for Cruise Ships