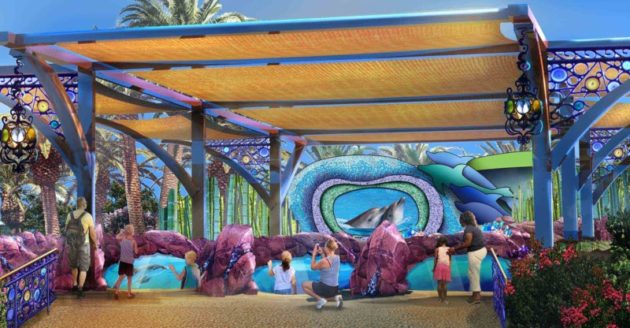 Orlando, FL, USA (September 27, 2016) — SeaWorld Entertainment, Inc., a leading theme park and entertainment company with 12 destination and regional theme parks, today announced its extensive line-up of new attractions, shows and events for 2017. The announcement includes major new ride additions at three of its theme parks; a virtual reality experience in Orlando, a new orca presentation in San Diego, and new shows and events at many other park locations. All totaled, the company will invest approximately $175 million in capital spending, one of the largest new attraction years in its more than 50 year history.

“We are extremely excited with the scope and depth of the new attractions and events coming to our SeaWorld and Busch Gardens parks in 2017,” said Joel Manby, President and Chief Executive Officer of SeaWorld Entertainment, Inc. “In developing new experiences we want guests to have fun, but also be inspired, and our parks are uniquely suited to create meaningful and fun vacations.”  He added, “We want our guests to share experiences that matter, and our 2017 additions truly reinforce that mission.” 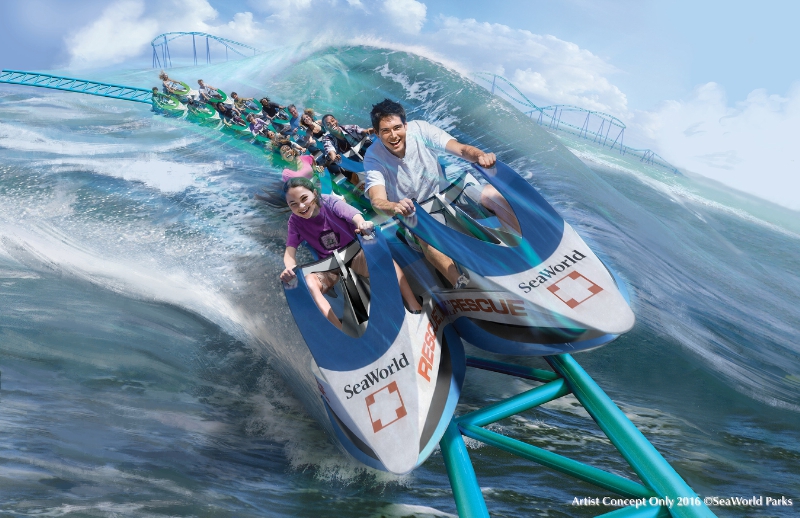 Wave Breaker: The Rescue Coaster™, SeaWorld® San Antonio – Summer 2017
A new generation of coaster, the first of its kind in North America, combining the thrill of the sea, the adrenaline rush of a multi-launch roller coaster and the inspiration of animal rescue is coming to SeaWorld San Antonio.

Wave Breaker: The Rescue Coaster boasts a variety of features inspired by the reality of jet skiing across a body of water. The unique jet ski-style car design is the first such coaster design in North America and engages riders in a straddled seating position. The design will allow riders to lean into a series of banked and serpentine turns, and grip the handle bars as they race over hills designed for maximum airtime, and a pair of high acceleration launches. Inspired by the Emmy® award-winning program, Sea Rescue®, the coaster enables riders to feel what it’s like to race alongside SeaWorld’s heroic animal care team and veterinarians as they spring into action at a moment’s notice to help rescue animals in distress.

Reaching heights of up to 61 feet, the majority of the coaster’s 2,600-foot track will be directly over water, creating the sensation that riders are surging across the park’s Ski Lake. With a minimum height requirement of 48 inches, Wave Breaker promises to be a dynamic coaster experience for the whole family.

The new coaster is unique to SeaWorld’s mission. The coaster is sure to thrill, but also brings awareness to the brave efforts of the SeaWorld animal teams as they join forces with organizations around the world to help ill, injured, orphaned and abandoned animals, like dolphins and sea turtles.  The queue line experience will tell the story of rescue missions, and invite guests to become involved in SeaWorld’s efforts to protect animals.

With the addition of Wave Breaker, guests can experience four coasters in San Antonio, spanning a range of ages and thrills. Wave Breaker joins The Great White®, a floorless steel rollercoaster that challenges riders to 360-degree flips, breathtaking loops, corkscrews and thrilling curves at speeds of up to 50 mph; Steel Eel®, a true hypercoaster featuring a 15-story vertical drop, followed by a series of camelbacks that provide periods of weightlessness and Shamu Express®, a junior-sized coaster perfect for families with younger children. 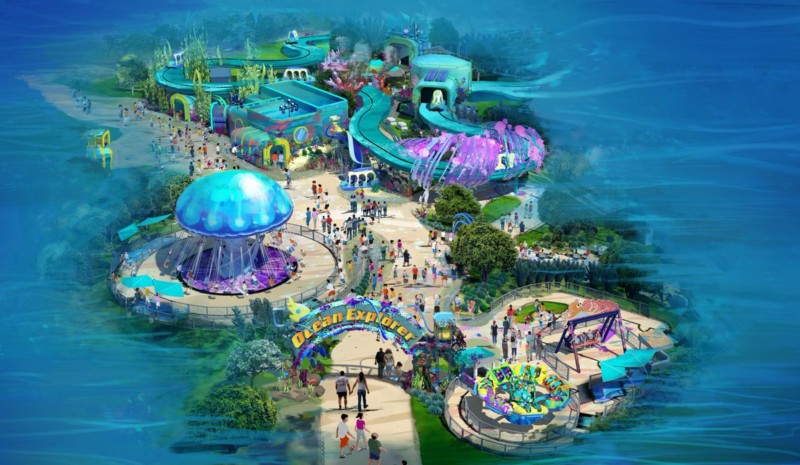 In the signature attraction for the realm, called Submarine Quest, guests will be adventurers on a global expedition of scientific exploration, travelling aboard submarines to see Ocean Explorer’s remarkable undersea animals. Embarking on these mini submarines, visitors will become researchers on a mission to collect data and learn how they can help protect animals. This three-minute experience will include an onboard digital navigation dashboard, as well as a few other surprises along the journey, enhancing the riders’ understanding of our fragile ocean ecosystem.

The heart and destination of Ocean Explorer will be a series of undersea research bases housing specially-designed aquariums and interactive displays that showcase unique and elusive ocean animals like giant octopuses and dozens of moray eels, as well as huge spider crabs and spiny king crabs. Both crab species will be new to SeaWorld San Diego.

The Ocean Explorer realm will feature five new family-friendly rides in total, including an exhilarating wave swing ride where guests will fly through thousands of real bubbles in chairs suspended from the tentacles of a giant jellyfish.

New Orca Encounter, SeaWorld San Diego – Summer 2017
SeaWorld San Diego will introduce new, inspiring, educational orca encounters, rather than theatrical shows, as part of its ongoing commitment to education, marine science research, and rescue of marine animals. These live documentaries will focus on orca enrichment, exercise, and overall health. This change will start in its San Diego park next year, followed by Orlando and then San Antonio by 2019.

The new Orca Encounter will be based on orca behavior in the wild: what they eat, how they hunt, how they navigate and how they communicate, helping guests gain a deeper appreciation and respect for the orcas and empowering them a sense of determination and purpose to help preserve the future of these majestic animals.  This new encounter will look at broader themes such as research, rescue, conservation, habitats and distribution, husbandry and care, and social structures.

The new behavioral-based orca experience, will inspire as well as educate guests about the majesty of these complex animals, and reinforces the company’s commitment to provide educational experiences with the park’s resident orcas. 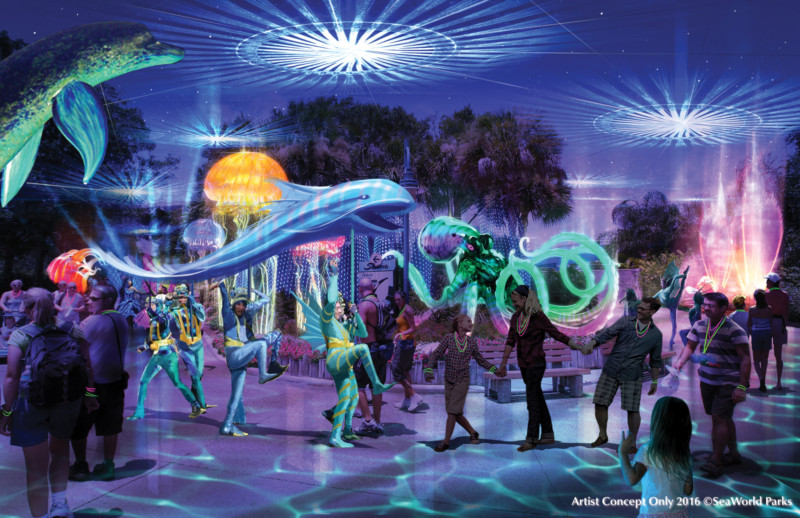 Electric Ocean, SeaWorld Orlando and San Diego – Summer 2017
Electric Ocean will debut next summer at SeaWorld parks in Orlando and San Diego as a brand new, end-of-day spectacle event. As the sun goes down, the lights and energy go up, offering guests a different kind of fun after dark. The ocean comes to life with bioluminescent lighting, music and pathway entertainment, immersing guests in a glowing sea of wonder. 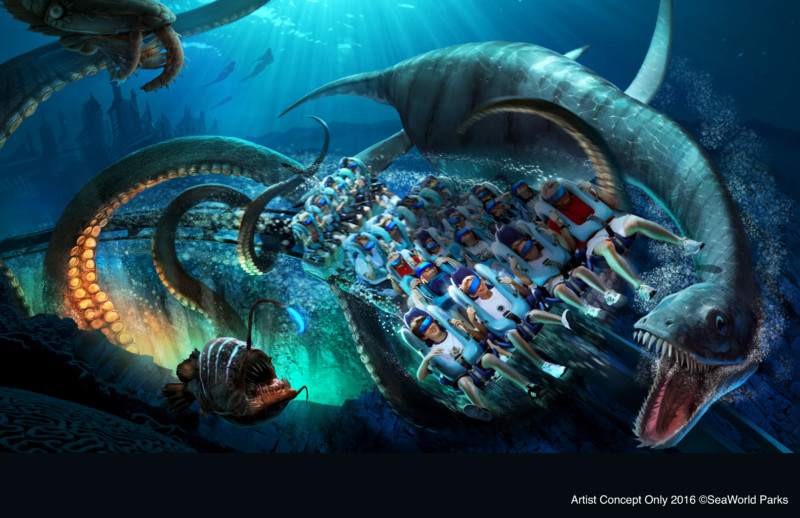 Guests will embark on a deep sea mission alongside sea creatures inspired by extinct and legendary animals of the past, including the mighty Kraken.  A custom digital overlay with uniquely designed headsets, fully integrated both mechanically and electronically into the coaster train, delivers a new one-of-a-kind adventure.  The addition of VR to this fan-favorite brings a new level of excitement and interest in Kraken, for both new and returning guests.

Dolphin Nursery, SeaWorld Orlando – Summer 2017
SeaWorld Orlando’s Dolphin Nursery will become more interactive in 2017, giving guests the opportunity to see mother and baby dolphins up close like never before. Large-scale acrylic windows will be created offering better guest viewing, including multiple levels to provide children a face-to-face perspective with baby dolphins. New slide out areas and a lifting floor will allow for easier access to mom and baby for the veterinary and animal care teams.

The next generation of multi-purpose digital displays will allow SeaWorld educators to share information about dolphin behavior, biology and conservation with guests in new ways by interacting with education and animal care video content. 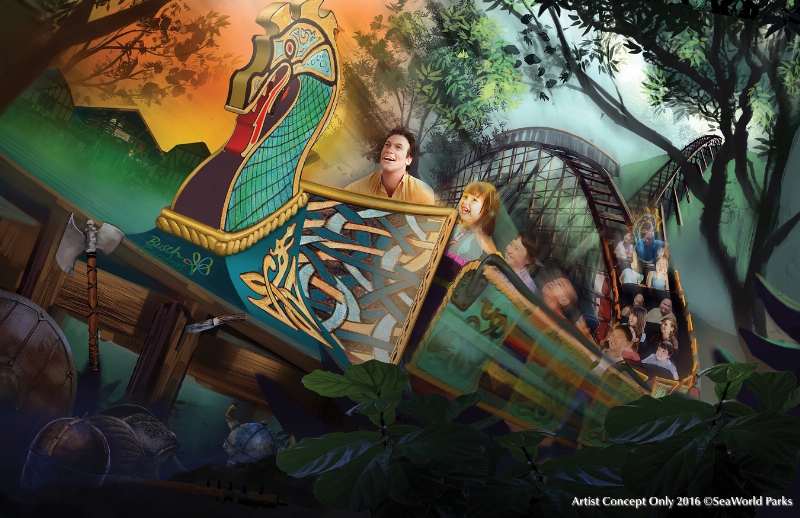 InvadR™, Busch Gardens® Williamsburg – Spring 2017
A new wooden roller coaster, InvadR, will join Busch Gardens Williamsburg’s collection of world-class thrill rides. The family thriller will be the park’s first wooden coaster and eighth roller coaster in total. A minimum height requirement of 46 inches make it an ideal ride for adults and children to share together, but the coaster will still feature exciting ride elements, including a more than 70 foot drop, and nine airtime hills. Located in the New France village of Busch Gardens, guests will travel more than 2,100 feet through a wooded terrain and underground through a tunnel.

The attraction’s theme will invite riders to choose their ride, in a battle between a band of invading Vikings and the villagers. In an unusual industry move, fans will help decide the ride elements including opportunities to vote on attraction details and theming. 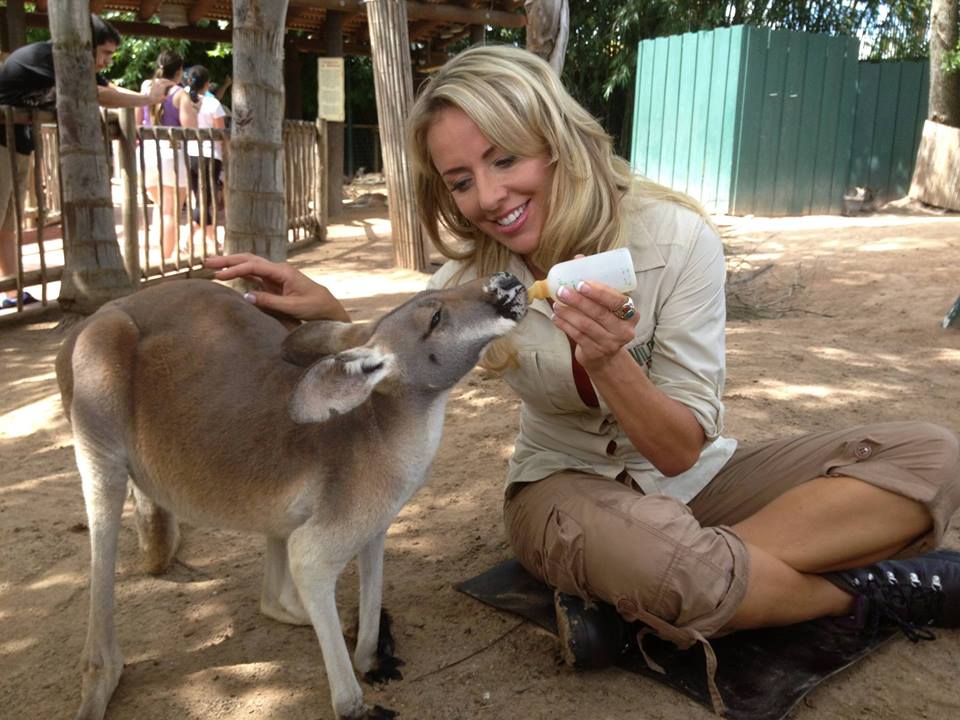 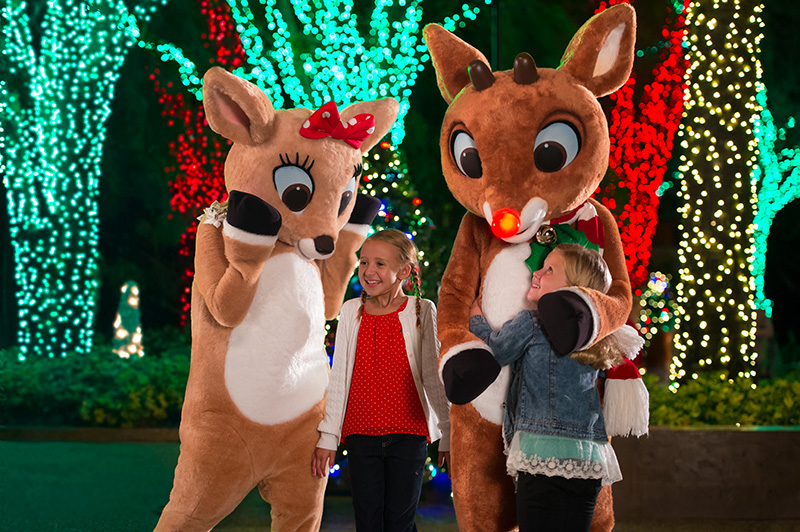 Rudolph & Friends will return for the 2017 season, with additional Rudolph the Red-Nosed Reindeer-themed experiences for families to enjoy the Christmas spirit even more. 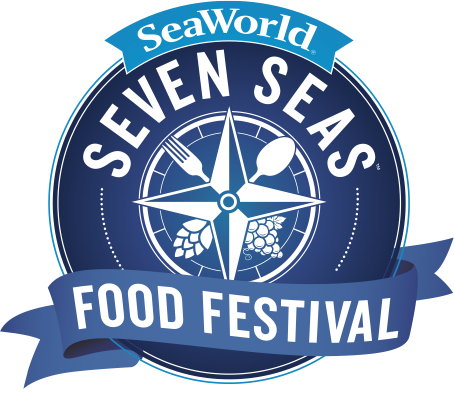 2017 Events
SeaWorld and Busch Gardens deliver year-round fun with special events at each park. Seven Seas Food Festival, a popular music and food event at SeaWorld in San Diego and San Antonio, is now coming to Orlandoin 2017. SeaWorld Orlando’s popular music and food events will expand to a total of 14 weekends and roll-up under the Seven Seas brand. Other park events include: Lunar New Year and Wild Days at SeaWorld San Diego; Just for Kids and Summer Nights at SeaWorld San Antonio; Food & Wine Festival and Bier Fest at Bush Gardens Williamsburg, and the Red Carpet Series at Busch Gardens Tampa Bay.

Joe Kleimanhttp://wwww.themedreality.com
Raised in San Diego on theme parks, zoos, and IMAX films, Joe Kleiman would expand his childhood loves into two decades as a projectionist and theater director within the giant screen industry. In addition to his work in commercial and museum operations, Joe has volunteered his time to animal husbandry at leading facilities in California and Texas and has played a leading management role for a number of performing arts companies. Joe has been News Editor and contributing author to InPark Magazine since 2011. HIs writing has also appeared in Sound & Communications, LF Examiner, Jim Hill Media, and MiceChat. His blog, ThemedReality.com takes an unconventional look at the attractions industry. Follow on twitter @ThemesRenewed Joe lives in Sacramento, California with his fiancé, two dogs, and a ghost.
Share
Facebook
Twitter
Linkedin
Email
Print
WhatsApp
Pinterest
ReddIt
Tumblr
Previous articlePHOTOS: California’s Great America Guests Experience FEARVR
Next articleElectrosonic Goes Holographic with Mass Effect: New Earth Attraction