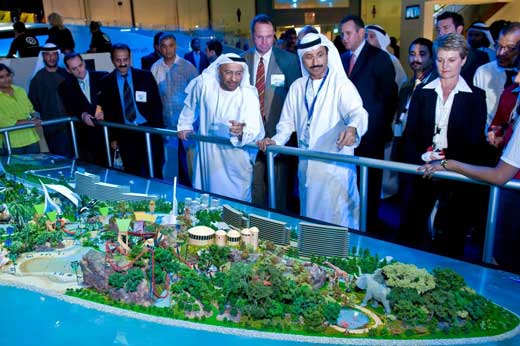 [quote]We have worked diligently with our partner to identify the best theme park concepts and potential locations in the region and are moving forward into the next stage of the project.” — Jim Atchison, President and CEO of SeaWorld Entertainment[/quote]

“The first quarter, which historically represents only 12%-15% of our full year attendance, came in as expected with the shift of Easter and the Spring Break holiday period into the second quarter.  Based on the successful launch of our 50th Anniversary celebration, a strong mix of new attractions yet to open, the ongoing benefits of our pricing and yield management strategies, and a strong start to the second quarter, we remain on track to deliver our fourth consecutive year of record financial results,” Jim Atchison, President and Chief Executive Officer of SeaWorld Entertainment, Inc. said today. “As a result, we are reaffirming our fiscal 2014 revenue guidance to be in the range of $1,490 million to $1,520 million and our Adjusted EBITDA guidance to be in the range of $450 million to $465 million.”

“Our business development efforts are moving forward,” Jim Atchison continued. “The Company recently entered into an exclusive six-month Memorandum of Understanding to assess the viability of a multi-park development in the Middle East with a partner who has an established track record of opening and operating world-class attractions, and to finalize the terms of the agreement.”

“In our media business, I am excited that our Sea Rescue television series, which has been seen by over 141 million viewers since its debut in 2012, was nominated for a Daytime Emmy Award in the category of Outstanding Children’s Series by the National Academy of Television Arts & Sciences,” Jim Atchison added.

NOTE: Photo is of model of Worlds of Discovery, a Busch Entertainment Corporation project announced in 2008 for Dubai’s Palm Jebel Ali.  Worlds of Discovery, at the apex of the Palm, would have featured SeaWorld, Busch Gardens, Discovery Cove, and Aquatica parks, along with a retail district and resort hotels.  The project was discontinued in February 2009.  As of date of posting, the Palm Jebel Ali remains undeveloped.

Joe Kleimanhttp://www.themedreality.com
Raised in San Diego on theme parks, zoos, and IMAX films, Joe Kleiman would expand his childhood loves into two decades as a projectionist and theater director within the giant screen industry. In addition to his work in commercial and museum operations, Joe has volunteered his time to animal husbandry at leading facilities in California and Texas and has played a leading management role for a number of performing arts companies. Joe has been News Editor and contributing author to InPark Magazine since 2011. HIs writing has also appeared in Sound & Communications, LF Examiner, Jim Hill Media, and MiceChat. His blog, ThemedReality.com takes an unconventional look at the attractions industry. Follow on twitter @themedreality Joe lives in Sacramento, California with his fiancé, two dogs, and a ghost.
Share
Facebook
Twitter
Linkedin
Email
Print
WhatsApp
Pinterest
ReddIt
Tumblr
Previous articleBREAKING NEWS: LEGOLAND California Resort Evacuated Due to Wildfires
Next articleConstruction Complete on National 9/11 Memorial Museum