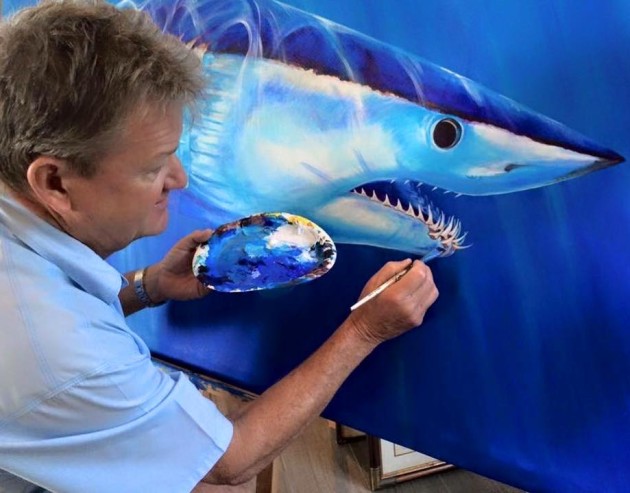 Orlando, FL, USA (April 27, 2016) – SeaWorld Parks & Entertainment is joining forces with renowned marine artist and conservationist Guy Harvey in a new partnership focused on ocean health and the plight of sharks in the wild.  SeaWorld’s new roller coaster, Mako, will be a major platform for this effort.  In the queue lines for the new coaster, guests will be educated and entertained through digital platforms that provide access to the real science of sharks in the wild and ways they can help protect them with Guy Harvey himself as the host.  Elsewhere in the realm guests will have access to real-time shark tracking and videos from Guy Harvey’s vast library of compelling and visually stunning shark expeditions.  Interactive materials will also share information about shark conservation and ways to get involved.

“SeaWorld is committed to raising awareness of the plight of sharks in the wild and the oceans they live in.  As part of our commitment that we made in March of this year, we will put meaningful dollars, research and man hours towards reducing this troubling trend,” Joel Manby, President and CEO of SeaWorld Parks & Entertainment said.  “The Guy Harvey Ocean Foundation and Guy Harvey Research Institute have been front and center in this effort for years, and we are proud to open a new chapter in those efforts today.”

Research indicates upwards of 100 million sharks are killed every year in the global shark fishery. The Guy Harvey Research Institute estimates 73 million per year for the fin trade alone. Members of SeaWorld’s animal care team recently joined a Guy Harvey Research Institute shark tagging expedition off the coast of Mexico, tagging six Mako sharks over the course of four days.  Those tagged sharks will be followed by students and researchers at Guy Harvey’s Institute at Nova Southeastern University, and can be viewed by the public online at www.GHRItracking.org.

“The partnership with SeaWorld will ensure our ocean conservation messages and our efforts to protect Mako sharks reach a broader audience here in the United States and worldwide,” said renowned scientist, marine wildlife artist and conservationist Dr. Guy Harvey. “We are thrilled to gain the support of the SeaWorld team as we continue to bring educational initiatives and conservation efforts to life.”

Guy Harvey will also commission an array of exclusive paintings and apparel, which will be available only at SeaWorld.  SeaWorld will donate a portion of the proceeds from the sale of such items directly to the Guy Harvey Ocean Foundation.  The renowned artist will be making park appearances, including the painting of a signature Mako mural for the attraction launch.

Joe Kleimanhttp://wwww.themedreality.com
Raised in San Diego on theme parks, zoos, and IMAX films, InPark's Senior Correspondent Joe Kleiman would expand his childhood loves into two decades as a projectionist and theater director within the giant screen industry. In addition to his work in commercial and museum operations, Joe has volunteered his time to animal husbandry at leading facilities in California and Texas and has played a leading management role for a number of performing arts companies. Joe previously served as News Editor and has remained a contributing author to InPark Magazine since 2011. HIs writing has also appeared in Sound & Communications, LF Examiner, Jim Hill Media, The Planetarian, Behind the Thrills, and MiceChat His blog, ThemedReality.com takes an unconventional look at the attractions industry. Follow on twitter @ThemesRenewed Joe lives in Sacramento, California with his wife, dog, and a ghost.
Share
Facebook
Twitter
Linkedin
Email
Print
WhatsApp
Pinterest
ReddIt
Tumblr
Previous articleBeauty and the Beast, Big Hero 6, and Soarin’ Joining Tokyo Disney Resort Attraction Portfolio
Next articleAttraktion! Takes 4D and Cinesplash 5D Viewers on New Adventure with the Storm Riders

Outdoor Factory and L3DFX join together in exclusive partnership