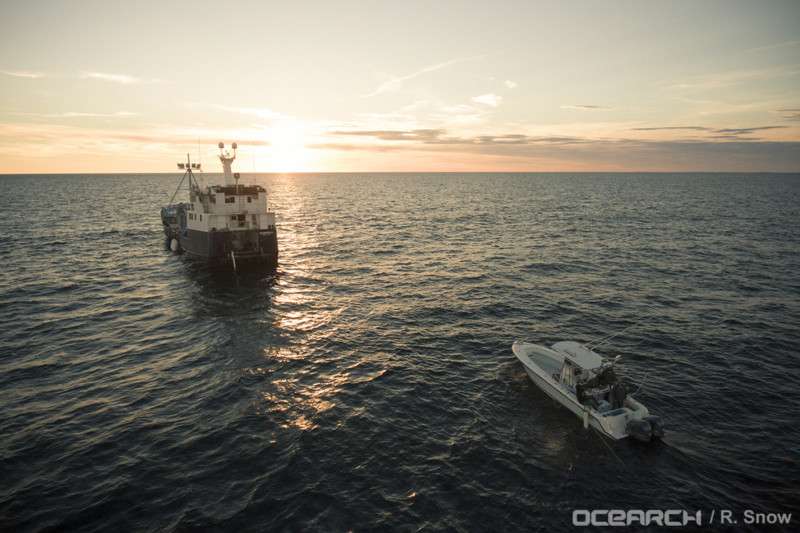 January 25 marked the official kick off of a partnership between two conservation leaders that is focused on the global protection of marine animals and the world’s oceans. SeaWorld Entertainment, Inc., and OCEARCH announced a multi-year partnership and have made valuable data available to both the scientific community and the general public for the first time ever in a widely-accessible format.

, offering both the scientific community and the general public the ability to learn more about threatened and endangered species as they are given a second chance at life.  Data on three of SeaWorld’s rescued and returned animals – Gale, a pilot whale, TJ, a dolphin, and Iris, a harbor seal – can now be found at OCEARCH.org and open access will be provided to the scientific community in the near future.

The announcement was made aboard the 126-foot research vessel M/V OCEARCH, a floating science lab and mothership on its first research expedition of 2018.   Future missions are scheduled for May and September of this year. These missions will bring together the OCEARCH team and SeaWorld veterinarians, scientists and researchers to share knowledge and experience that will contribute to their shared mission to educate, inspire and advocate for ocean health and marine animal conservation efforts.

Aboard the M/V OCEARCH today with front row access to the team and their work are SeaWorld’s Dr. Todd Robeck, an expert in the field of veterinary reproduction and members of the SeaWorld & Busch Gardens Youth Advisory Council, a group of passionate young conservationists working to protect animals and inspire future generations.

“We are thrilled to partner with OCEARCH to continue to raise awareness of critical issues surrounding marine animals and habitats,” said Dr. Chris Dold, Chief Zoological Officer at SeaWorld.  “SeaWorld is one of the world’s foremost zoological rescue organizations, and using the global satellite tracker on rehabilitated and returned animals is an exciting way for us to share the next chapter in the lives of rescued animals. Working together, we hope to inspire the next generation of marine scientists and everyday advocates through our common love of the ocean.”

Chris Fischer, OCEARCH Founding Chairman and Expedition Leader, added: “Together, OCEARCH and SeaWorld will focus on bringing everyday people closer to the ocean to increase understanding of how to better protect marine animals and habitats. We are committed to providing open-sourced, real-time data and content, allowing anyone to follow our findings – from classrooms to researchers and experts.”

Joe Kleimanhttp://wwww.themedreality.com
Raised in San Diego on theme parks, zoos, and IMAX films, InPark's Senior Correspondent Joe Kleiman would expand his childhood loves into two decades as a projectionist and theater director within the giant screen industry. In addition to his work in commercial and museum operations, Joe has volunteered his time to animal husbandry at leading facilities in California and Texas and has played a leading management role for a number of performing arts companies. Joe previously served as News Editor and has remained a contributing author to InPark Magazine since 2011. HIs writing has also appeared in Sound & Communications, LF Examiner, Jim Hill Media, The Planetarian, Behind the Thrills, and MiceChat His blog, ThemedReality.com takes an unconventional look at the attractions industry. Follow on twitter @ThemesRenewed Joe lives in Sacramento, California with his wife, dog, and a ghost.
Share
Facebook
Twitter
Linkedin
Email
Print
WhatsApp
Pinterest
ReddIt
Tumblr
Previous articleD3D and Christie to Upgrade Omaha Zoo’s Giant Screen Theater to 4K Digital
Next articleThe Alamo Comes to Life in Augmented Reality