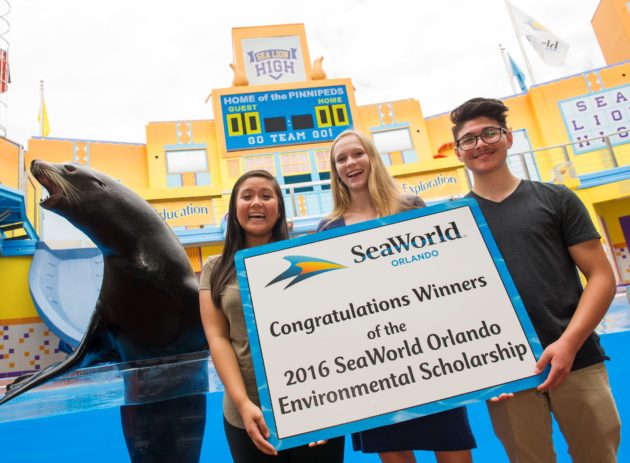 Orlando, FL, USA – SeaWorld Orlando awarded four students with a passion for protecting and preserving the environment with $5,000 educational scholarships toward any college or university they plan to attend as part of the company’s 2016 Environmental Scholarship Program. The students were awarded their scholarships at SeaWorld Orlando June 17 before heading into the park with their families to celebrate.

The scholarship opportunity was made available to Florida high school seniors with a GPA of 3.0 or higher. The winning students demonstrated their passion for animals and the environment through a written application and a short video highlighting their environmental achievements and goals.

The applications were evaluated by representatives of SeaWorld’s Education & Conservation Department. Judges considered originality, creativity, content, organization, neatness and the general presentation of the application.

While at SeaWorld Orlando, the students and their families were treated to lunch, taken on an in-depth behind-the-scenes tour with members of the SeaWorld education and zoological team, a meet and greet with a sea lion after a showing of Clyde & Seamore’s Sea Lion High and a front row ride on Mako, Orlando’s tallest, fastest and longest coaster. The scholarship recipients also received four SeaWorld Orlando Annual Passes and a tablet to bring with them to college this fall.

Christen Aniel from Mandarin High School (Jacksonville) – Christen Aniel has applied her passion for coral reefs to a school project that uses left over concrete from construction companies and creates artificial reefs for marine life to thrive once again on her local Jacksonville coastline.

Connor Wong from Edgewood Jr. Sr. High School (Merritt Island)- Connor Wong brought his ideas to life, literally, by growing mangroves in his own backyard and planting them, in turn contributing to reforesting the Indian River Lagoon.

Joe Kleimanhttp://wwww.themedreality.com
Raised in San Diego on theme parks, zoos, and IMAX films, Joe Kleiman would expand his childhood loves into two decades as a projectionist and theater director within the giant screen industry. In addition to his work in commercial and museum operations, Joe has volunteered his time to animal husbandry at leading facilities in California and Texas and has played a leading management role for a number of performing arts companies. Joe has been News Editor and contributing author to InPark Magazine since 2011. HIs writing has also appeared in Sound & Communications, LF Examiner, Jim Hill Media, and MiceChat. His blog, ThemedReality.com takes an unconventional look at the attractions industry. Follow on twitter @ThemesRenewed Joe lives in Sacramento, California with his fiancé, two dogs, and a ghost.
Share
Facebook
Twitter
Linkedin
Email
Print
WhatsApp
Pinterest
ReddIt
Tumblr
Previous articleAIMS International Announces New Safety Award
Next articleIPM talks with IAAPA’s Asian Attractions Expo leadership