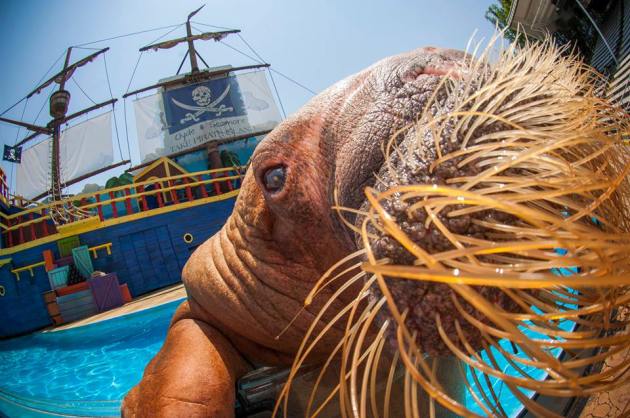 It’s a hilarious tale, filled with amazing animal behaviors and splashy audience fun. Clyde and Seamore find themselves in slippery pursuit of their high school diplomas and judging from the slapstick, high-energy pranks and hijinks, there’s no doubt Clyde and Seamore will emerge as heads of their class.

When joined by mischievous otters, a 2,300-pound walrus and a cast of goofy human characters swimming along in the fun, it certainly won’t be a normal class.

“We love putting together a new show,” said Todd Coffman, SeaWorld Orlando’s lead trainer for “Sea Lion High.” “It’s a chance for us to try out the new behaviors we’ve been working on with our sea lions, otters and walrus. And the trainers love showcasing these awesome animals and their incredible abilities.”

It’s the last day of school at Sea Lion High and both Clyde – the school’s top math whiz – and Seamore – the school’s sports hero – are nominated to win scholarships to Sea Lion University.  But Trip, who’s the school’s self-appointed varsity star and resident tough guy, has different plans. It turns out Clyde and Seamore haven’t completed all their classes and only have one day to finish them!

Clyde, Seamore and their friends lead the audience on a wild and heroic adventure as they finish their classes with typical sea lion flair. And the audience might uncover a thing or two along the way, following Sea Lion High’s motto, “Education through Exploration and … Imagination.”  “Our guests will have a great time at the new show, but they’ll also learn about the relationships our trainers have with each sea lion, otter and walrus. And seeing these animals up-close provides each guest with an opportunity to connect and be inspired by them,” Coffman said.

“There are several sea lions in the cast of ‘Sea Lion High’ and each of them bring something special to their role, because their personalities are so different. There’s Seamore, who’s the Einstein of sea lions and who looks at every challenge as something to be conquered.  Clyde, is big, strong and loyal but always a little silly. He doesn’t take things too seriously. Imagine working with this cast of characters, from Opie Otter who weighs only 10 lbs., to Sir Winston Walrus who tips the scales at 2,300 lbs., and sea lions that weigh about 550 lbs. That’s a lot of star power on one stage,” Coffman said. “Every day and every show will be a different experience.”

The production team for “Clyde & Seamore’s Sea Lion High” is full of star power, too. BT McNicholl, who’s handling directing and co-writing duties, is a Broadway vet, currently working on “Cabaret” and recently “Billy Elliott” and “Sunday In The Park With George.” McNicholl also directed several of SeaWorld’s shows including the holiday-themed “O Wondrous Night” at SeaWorld Orlando. Court Watson is scenic designer for “Sea Lion High” and is bringing an all-new set to the park’s Sea Lion & Otter Stadium. Randy Rogel is penning the script and original songs, using his experience from TV’s “Animaniacs” and “Batman.”

Joe Kleimanhttp://wwww.themedreality.com
Raised in San Diego on theme parks, zoos, and IMAX films, Joe Kleiman would expand his childhood loves into two decades as a projectionist and theater director within the giant screen industry. In addition to his work in commercial and museum operations, Joe has volunteered his time to animal husbandry at leading facilities in California and Texas and has played a leading management role for a number of performing arts companies. Joe has been News Editor and contributing author to InPark Magazine since 2011. HIs writing has also appeared in Sound & Communications, LF Examiner, Jim Hill Media, and MiceChat. His blog, ThemedReality.com takes an unconventional look at the attractions industry. Follow on twitter @ThemesRenewed Joe lives in Sacramento, California with his fiancé, two dogs, and a ghost.
Share
Facebook
Twitter
Linkedin
Email
Print
WhatsApp
Pinterest
ReddIt
Tumblr
Previous articleaccesso Passport Named Best New Product at 2014 IAAPA Attractions Expo
Next article2014 Brass Ring Awardees Named at IAAPA Attractions Expo