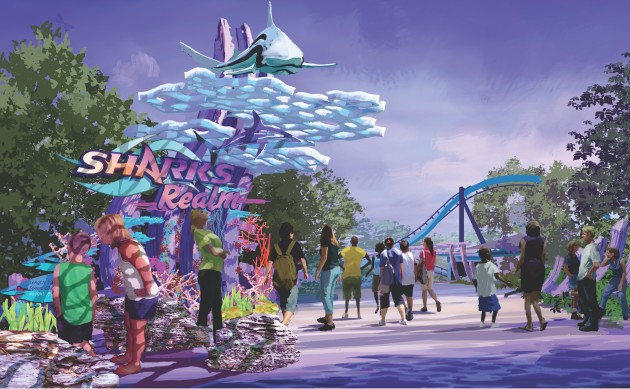 Orlando, FL, USA (May 27, 2015) – Surfacing summer 2016 at SeaWorld Orlando will be Mako, a 200-foot-tall hypercoaster that will reach 73 mph along 4,760 feet of steel track — nearly a mile long — and leave riders feeling both breathless and weightless.  Named for one of the ocean’s fastest known sharks, Mako will be Orlando’s tallest, fastest and longest roller coaster.

“On Mako, you’ll experience what it’s like to be this apex predator, surging through the water at top speed and chasing prey throughout a massive reef,” said Brian Morrow, SeaWorld’s attraction creative director. “It will be a wild mix of fear, thrills and fun.” 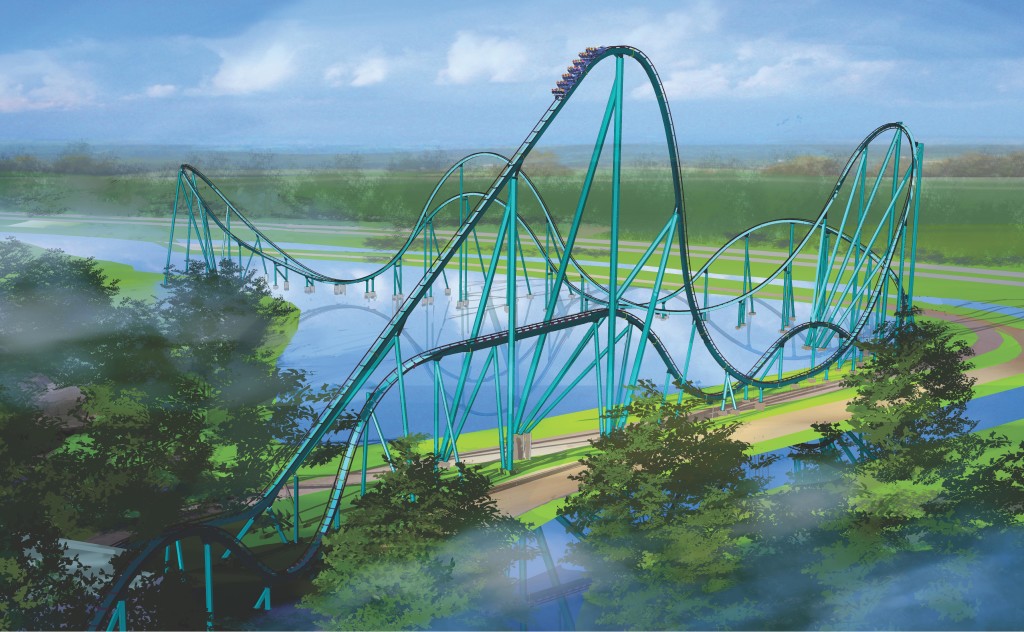 Mako’s tight turns and speed are inspired by reality.  Mako sharks — also called “blue pointers” — are known for their top speed, making extreme jumps and the ability to quickly change course as they pursue their prey.

The new coaster will become one of the world’s few true hypercoasters, a group of roller coasters known for high speeds and steep drops and hills that create a feeling of weightlessness or “air time.” As the sleek coaster cars crest each hill, riders float, nearly weightless.

Mako is manufactured by Bolliger & Mabillard, a company renowned among coaster enthusiasts. B&M has built many of the world’s top roller coasters, including SeaWorld’s Manta and Kraken, and Busch Gardens Tampa Bay’s SheiKra. 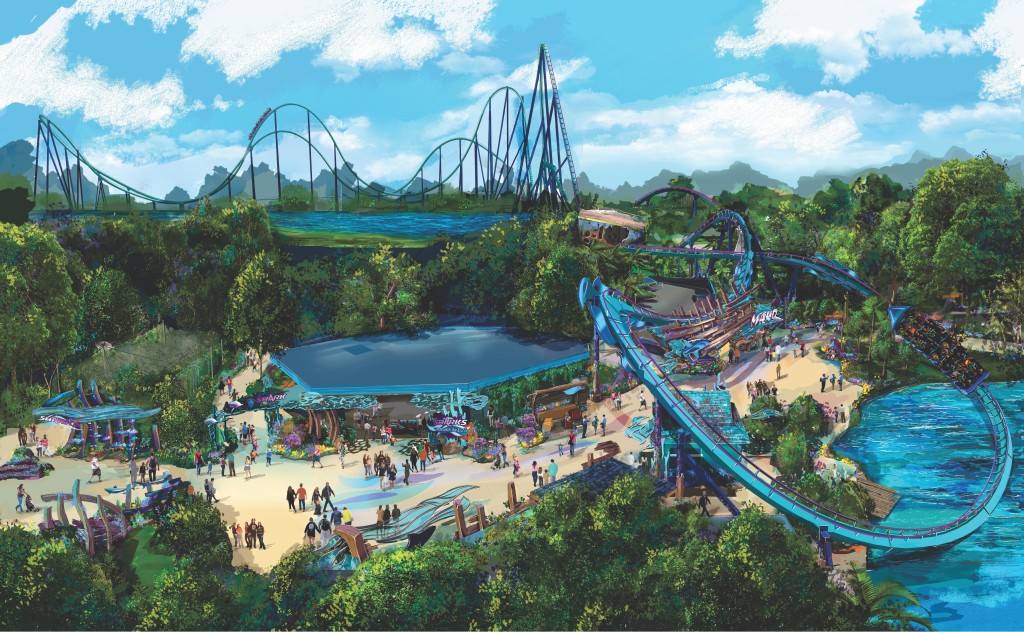 The entire realm is created to make guests feel they’re underwater, part of the group of sharks and toothy animals that have taken over a shipwrecked reef. 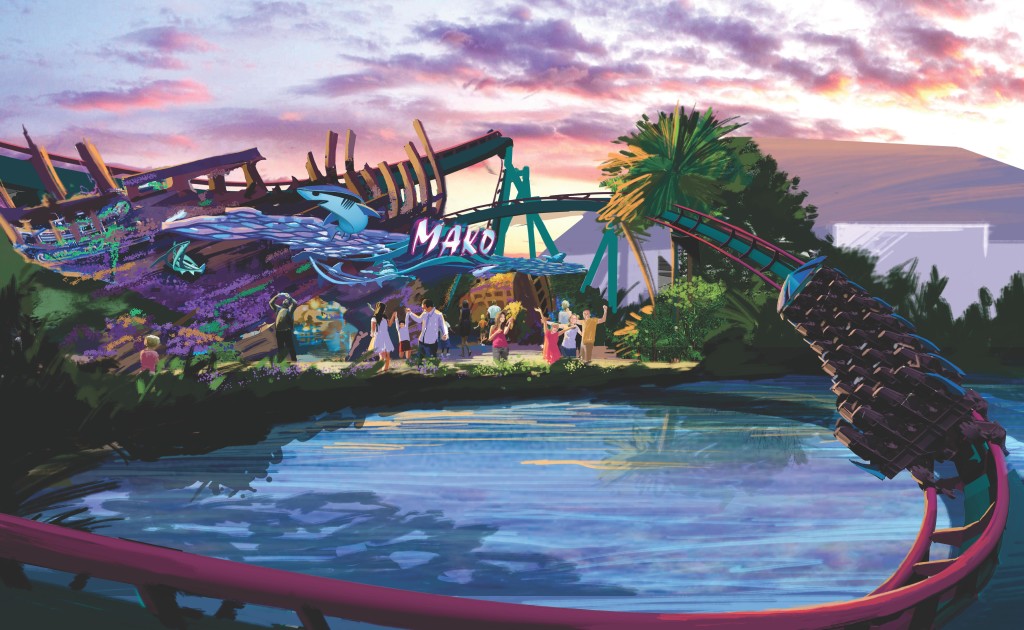 In the plaza, guests will learn about the impact humans are having on sharks and why these animals are critical to the environment. Sharks are hunted for their fins — considered a delicacy in certain countries — and thousands are caught accidentally in nets. Several species of sharks are on the verge of extinction.

“It’s this blend of education and thrills, immersing guests in an underwater world, that sets a SeaWorld ride apart from others,” said Morrow.

“Our fans will love how Mako complements our other rides. Kraken is big, monstrous and twisty. Manta is massive and glides smoothly, taking you on a flight like a huge ray. Mako is entirely different. It’s streamlined and fast, just like a mako shark. There’s no wasted motion, it’s all speed and dives.”

Mako uses a unique sound system to enhance the experience, and not just for those on the ride. The full score of Mako can be heard and follows riders out of the station and up the lift hill. Custom surround effects and musical scores fill the realm, changing as the coaster dives through the area.

Joe Kleimanhttp://wwww.themedreality.com
Raised in San Diego on theme parks, zoos, and IMAX films, InPark's Senior Correspondent Joe Kleiman would expand his childhood loves into two decades as a projectionist and theater director within the giant screen industry. In addition to his work in commercial and museum operations, Joe has volunteered his time to animal husbandry at leading facilities in California and Texas and has played a leading management role for a number of performing arts companies. Joe previously served as News Editor and has remained a contributing author to InPark Magazine since 2011. HIs writing has also appeared in Sound & Communications, LF Examiner, Jim Hill Media, The Planetarian, Behind the Thrills, and MiceChat His blog, ThemedReality.com takes an unconventional look at the attractions industry. Follow on twitter @ThemesRenewed Joe lives in Sacramento, California with his wife, dog, and a ghost.
Share
Facebook
Twitter
Linkedin
Email
Print
WhatsApp
Pinterest
ReddIt
Tumblr
Previous articlePuff the Magic Dragon Headed to Themed Retail and Dining Through Licensing Agreement with Schussler Creative
Next articleSliding into Asia