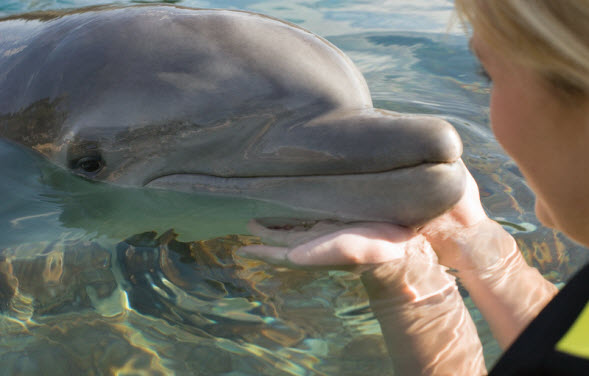 San Antonio, TX, USA (March 6, 2015) – SeaWorld San Antonio announced today that the park will begin construction this spring on a significant addition that will open in 2016. This project, one of the largest single capital investments in the park’s 27‐year history, will include a revolutionary new area for dolphins located in the northern part of the park.    These changes will double the size of the park’s
dolphin pool and allow guests to experience these amazing mammals in new, more powerful ways.

The habitat will be dramatically transformed into two new ways to experience dolphins. First,
SeaWorld guests will finally be able to go beneath the water’s surface to see dolphins swimming and
playing underwater. Large viewing panes for underwater viewing will allow guests to see how these
magnificent creatures swim, interact and play from an entirely new vantage point. But the most
dramatic change to this area is the introduction of a new facility that will allow guests to swim with
dolphins in a naturalistic environment. The new addition, which will be named Discovery Point, will
borrow its look and feel from the company’s Discovery Cove park in Orlando, Florida by offering guests a dolphin swim experience in a lush, tropical setting. 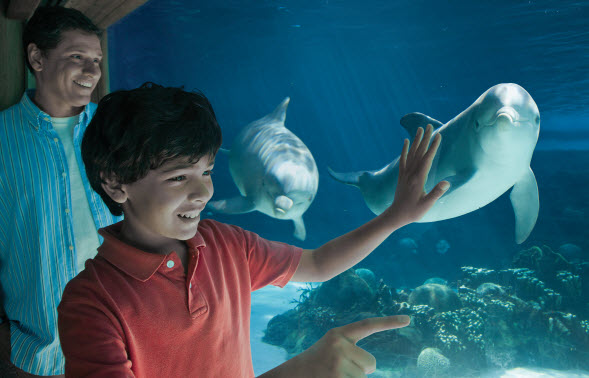 Starting March 23, SeaWorld will close the northern part of the park to guests to make way for the revolutionary updates to its dolphin habitat. Access to Dolphin Cove and the park’s Sharks/The Coral Reef attractions will be restricted until the project is completed in May 2016.

This project reflects SeaWorld’s ongoing commitment to improve its animal habitats while
providing new ways for guests to make connections with the animals in its care. Updates to the park’s
dolphin pools will more than double water volume of the habitat, enlarging the pool to hold more than
600,000 gallons. The improvements will also benefit SeaWorld guests, allowing them to have access to
expansive underwater viewing windows where they see dolphins swimming, playing and interacting
from a new vantage point.

When completed in May 2016, Discovery Point will become the hub for three of the park’s
animal interaction programs serving as a starting point for guests as they journey to Beluga Bay, Sea Lion Shallows and Dolphin Lagoon. These programs compliment the park’s other interaction programs with stingrays and penguins which will remain unchanged. 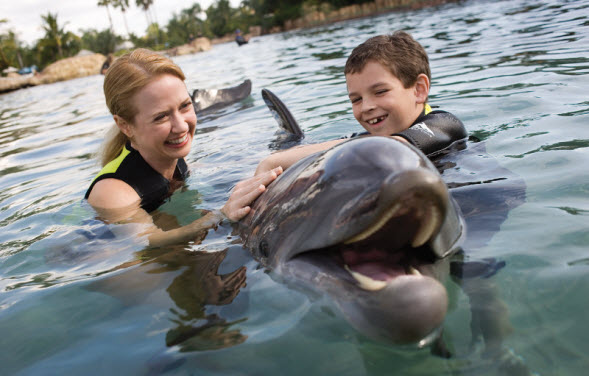 In the dolphin swim experience, guests will meet bottlenose dolphins during an interactive
adventure and learn about dolphin behavior and communication, along with SeaWorld’s dolphin
research and rescue efforts. After their classroom presentation and discussion on dolphins’ natural
history and physiology, guests will wade into shallow water and become acquainted with one of these
fascinating, intelligent dolphins through close contact during this one‐on‐one dolphin encounter. Then,
taking the adventure one step further, guests can interact with their dolphin in deeper water for an
exciting dorsal fin tow ride back to shore. Paid reservations must be made for this program, and
participants must be at least 6 years old to swim with dolphins. Children ages 6 to 12 must be
accompanied by a paying adult who also is participating in the dolphin swim experience.

“Guests have asked repeatedly for this once‐in‐a‐lifetime opportunity to swim with these
fascinating animals,” said Dan Decker, park president of SeaWorld & Aquatica San Antonio.  “Up until
now, we’ve only offered this experience in Orlando so this will make it much more accessible to guests
in our region.”

“As an accredited Association of Zoos and Aquariums (AZA) facility and world leader in animal
care, these future attractions will not only revolutionize the way our guests connect with and learn
about our animals, but it will allow us to continue SeaWorld’s excellent standard of care,” Decker added.

Joe Kleimanhttp://wwww.themedreality.com
Raised in San Diego on theme parks, zoos, and IMAX films, Joe Kleiman would expand his childhood loves into two decades as a projectionist and theater director within the giant screen industry. In addition to his work in commercial and museum operations, Joe has volunteered his time to animal husbandry at leading facilities in California and Texas and has played a leading management role for a number of performing arts companies. Joe has been News Editor and contributing author to InPark Magazine since 2011. HIs writing has also appeared in Sound & Communications, LF Examiner, Jim Hill Media, and MiceChat. His blog, ThemedReality.com takes an unconventional look at the attractions industry. Follow on twitter @ThemesRenewed Joe lives in Sacramento, California with his fiancé, two dogs, and a ghost.
Share
Facebook
Twitter
Linkedin
Email
Print
WhatsApp
Pinterest
ReddIt
Tumblr
Previous articleFeld Entertainment’s Ringling Bros. Circus to Phase Out Elephant Performances by 2018
Next articleChina to Impose New Regulations on Privately Owned Museums