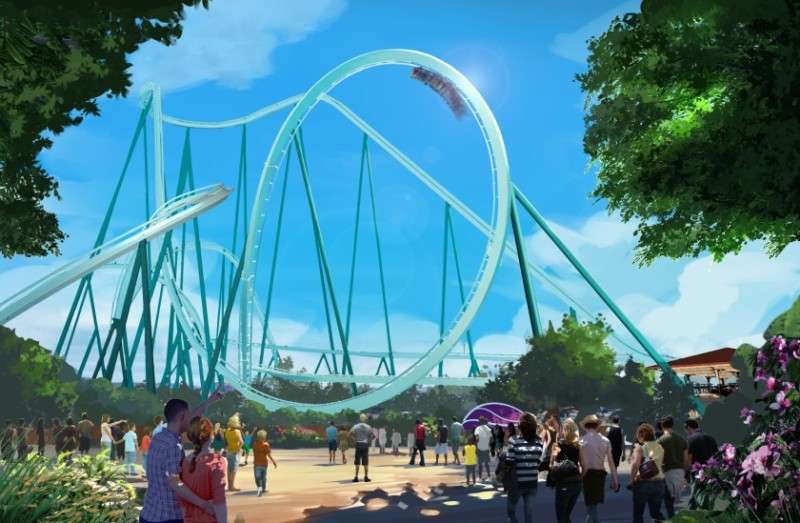 Named for the world’s largest penguin, the new coaster will mimic this species’ underwater diving ability. Emperor penguins can dive to a depth of 1,800 feet.

Climbing to 153 feet with feet dangling in the air, riders on Emperor will be suspended on a 45-degree angle at the crown of the ride before plunging down a 143-foot facedown vertical drop accelerating to more than 60 miles per hour! Riders will also experience inversions, barrel roll, Immelmann loop, hammerhead turn and flat spin as they race along the nearly 2,500 feet of track. Each of the floorless ride cars will hold 18 riders in three, six-person rows. This is the first seating configuration of its kind in North America.

“There will be no other coaster experience like this in California,” said Marilyn Hannes, SeaWorld San Diego’s park president. “Emperor will both thrill our coaster enthusiasts and also serve as an attraction that educates guests about the importance of animal and conservation issues.”

This attraction will highlight an important new animal-conservation partnership between SeaWorld and Penguins International that will focus on penguin awareness and the conservation needs of this special aquatic bird. A portion of the proceeds from sales of penguin merchandise at the Emperor retail store will be donated to Penguins International to support their important conservation, education and research efforts.

“We are excited to enter into this partnership with SeaWorld,” said David Schutt, president of Penguins International. “It’s an amazing opportunity that will help advance our penguin conservation programs at several high-priority sites and our public awareness campaigns that highlight the threats penguins face in today’s world.”

The new Emperor coaster will be located adjacent to Journey to Atlantis in the southeast corner of the park in an area that is currently a parking lot, and will be built by Bolliger & Mabillard, based in Switzerland.

Joe Kleimanhttp://wwww.themedreality.com
Raised in San Diego on theme parks, zoos, and IMAX films, Joe Kleiman would expand his childhood loves into two decades as a projectionist and theater director within the giant screen industry. In addition to his work in commercial and museum operations, Joe has volunteered his time to animal husbandry at leading facilities in California and Texas and has played a leading management role for a number of performing arts companies. Joe has been News Editor and contributing author to InPark Magazine since 2011. HIs writing has also appeared in Sound & Communications, LF Examiner, Jim Hill Media, and MiceChat. His blog, ThemedReality.com takes an unconventional look at the attractions industry. Follow on twitter @ThemesRenewed Joe lives in Sacramento, California with his fiancé, two dogs, and a ghost.
Share
Facebook
Twitter
Linkedin
Email
Print
WhatsApp
Pinterest
ReddIt
Tumblr
Previous articleAlberto Zamperla and Fred Langford inducted into IAAPA Hall of Fame
Next articleBlackpool Pleasure Beach’s Amanda Thompson named 2020 IAAPA Board Chairman