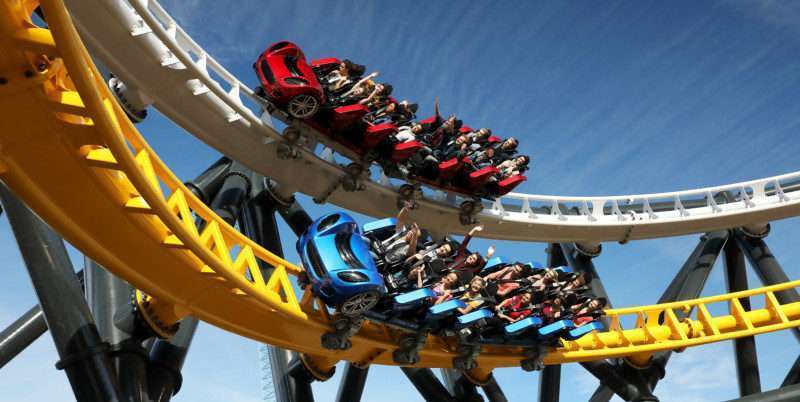 “We are thrilled to add yet another unique, record-breaking coaster to our second-to-none collection of world-class attractions. West Coast Racers absolutely delivers, living up to Six Flags Magic Mountain’s unprecedented thrill DNA,” said Park President, Neal Thurman. “With a broad appeal, this coaster is the centerpiece of the newly themed area, The Underground, featuring new dining and retail opportunities.”

“We are thrilled to partner with Six Flags Magic Mountain to create this unprecedented new ride,” said Ryan Friedlinghaus. “Throughout my career, I have always thought outside of the box and I love being challenged to build things others can’t. It was amazing to be part of every aspect of West Coast Racers, from designing the coaster cars, to the overall look and feel of the entire ride. Six Flags Magic Mountain allowed us to be completely hands-on. This truly is an authentic West Coast Customs experience from the moment you get in line for the ride until you get off the coaster. Hope fans LOVE it!”

**A record-breaking four magnetic launches, including a side-by-side first and second race launch;

**14 track crossovers and a high-five (where riders can almost high-five guests riding the opposing train), for a total of 30 train interactions (15 per lap);

**Speeds up to 55 miles-per-hour as riders cross the finish line.

Joe Kleimanhttp://wwww.themedreality.com
Raised in San Diego on theme parks, zoos, and IMAX films, Joe Kleiman would expand his childhood loves into two decades as a projectionist and theater director within the giant screen industry. In addition to his work in commercial and museum operations, Joe has volunteered his time to animal husbandry at leading facilities in California and Texas and has played a leading management role for a number of performing arts companies. Joe has been News Editor and contributing author to InPark Magazine since 2011. HIs writing has also appeared in Sound & Communications, LF Examiner, Jim Hill Media, and MiceChat. His blog, ThemedReality.com takes an unconventional look at the attractions industry. Follow on twitter @ThemesRenewed Joe lives in Sacramento, California with his fiancé, two dogs, and a ghost.
Share
Facebook
Twitter
Linkedin
Email
Print
WhatsApp
Pinterest
ReddIt
Tumblr
Previous articlePlacing Global Gaming Expo in the world of themed entertainment
Next articleThis Sunday’s San Diego Zoo and San Diego Zoo Safari Park attendance to support Australia Crisis Fund