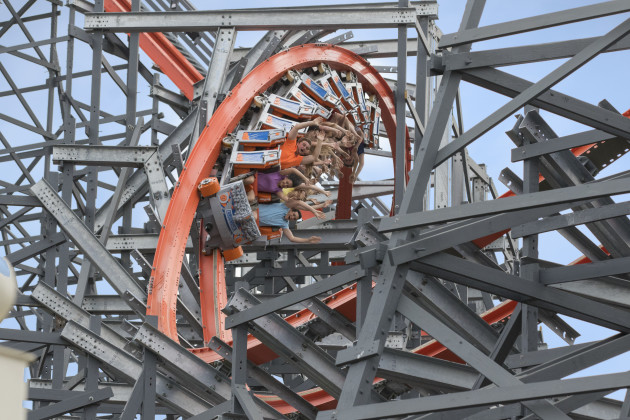 Wicked Cyclone, one of the most anticipated new rides of the season, opened in May to rave reviews and was the first hybrid coaster to hit the East Coast. The ride stands 10 stories tall and reaches speeds of 55 miles per hour with three inversions. Once the twenty-four thrill seekers board Wicked Cyclone, they quickly climb the 109-foot hill to then zip along the track at maximum speeds while experiencing the feeling of weightlessness and a truly wicked ride. Wicked Cyclone is the first coaster of its kind to have two Zero G Rolls. Riders also experience more airtime on Wicked Cyclone than any other coaster on the East Coast.

–One of only 5 hybrid coasters on the planet;

–78 degree drop with hair-raising speeds of 55 miles per hour;

–“Jaw-dropping” action through 24 different ride elements within 3,320 feet of track.

Bizarro made its debut at Six Flags New England in 2000 and has been the recipient of numerous industry awards. This purple giant has entertained riders for well over a decade and provides a unique experience featuring 5,400 feet of track, a 20-story lift hill and speeds of 77 miles per hour. Bizarro stands adjacent to the Connecticut River which provides riders with exceptional views of New England’s landscape.

–70 degree drop with heart pounding speeds of 77 miles per hour;

–221-foot drop into an underground tunnel;

–Bizarro has been voted the #1 steel roller coaster in the world in Amusement Today’s Golden Ticket Awards five times since the year 2003.

Joe Kleimanhttp://wwww.themedreality.com
Raised in San Diego on theme parks, zoos, and IMAX films, InPark's Senior Correspondent Joe Kleiman would expand his childhood loves into two decades as a projectionist and theater director within the giant screen industry. In addition to his work in commercial and museum operations, Joe has volunteered his time to animal husbandry at leading facilities in California and Texas and has played a leading management role for a number of performing arts companies. Joe previously served as News Editor and has remained a contributing author to InPark Magazine since 2011. HIs writing has also appeared in Sound & Communications, LF Examiner, Jim Hill Media, The Planetarian, Behind the Thrills, and MiceChat His blog, ThemedReality.com takes an unconventional look at the attractions industry. Follow on twitter @ThemesRenewed Joe lives in Sacramento, California with his wife, dog, and a ghost.
Share
Facebook
Twitter
Linkedin
Email
Print
WhatsApp
Pinterest
ReddIt
Tumblr
Previous articleS&S Supplying 16 Seat Drop Tower for motiongate Dubai
Next articlePremier Rides Will Make Riders Face Their Phobias With New LSM Coaster at Lake Compounce