Pirates of the Caribbean: Battle for Sunken Treasure Wins VES Award for Outstanding Visual Effects in a Special Venue Project 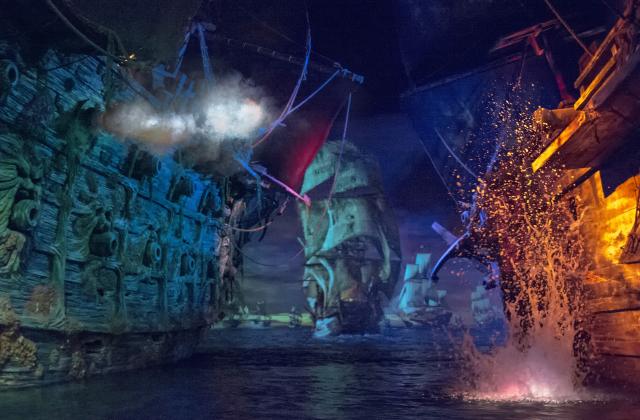 Shanghai Disneyland’s anchor attraction Pirates of the Caribbean: Battle for the Sunken Treasure won the award for “Outstanding Visual Effects in a Special Venue Project” honored by Visual Effects Society (VES), marking the second major international industry award following the announcement last fall by the Themed Entertainment Association that the attraction will receive the Thea Award for Outstanding Achievement – Attraction.

The award was announced during the 15th Annual VES Awards ceremony hosted on February 7th in California, where the most outstanding visual effects work in motion pictures, television and other media of the year around the world were recognized, and artists who created them were honored. 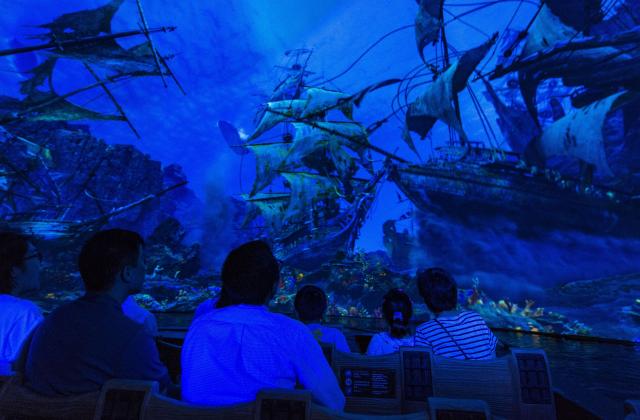 Pirates of the Caribbean: Battle for the Sunken Treasure is an all-new ride experience developed specifically for Shanghai Disneyland. The interior of the attraction’s massive 175,000 square foot building was filled to the rafters with fully-immersive media screens that bridge the space between massive practical set pieces. The spectacle experienced on the ride is on a grand scale and involves technology that has never been used before in a theme park attraction. Media production for the giant screens was a collaboration between Walt Disney Imagineering Shanghai and Industrial Light and Magic.

Pirates of the Caribbean: Battle for the Sunken Treasure is an immersive indoor boat ride that takes guests on a new rollicking adventure with Captain Jack Sparrow to steal the priceless treasure of Davy Jones. Seamlessly blending Disney storytelling and state-of-the-art technologies, the attraction features three large media domes, projected effects, lifelike animated figures, theatrical sets and sophisticated lighting to dramatically take guests on, over and even under the sea on a nautical adventure. With a new, highly controlled ride system used for the first time in Shanghai, the boats spin, travel sideways, and even move backwards to create a highly dynamic experience. Guests will encounter fearless pirates, mermaids and even a kraken. Disney’s patented Audio-Animatronics technology and recent advancements in robotics bring these pirates to a new level of realistic performance.

Joe Kleimanhttp://wwww.themedreality.com
Raised in San Diego on theme parks, zoos, and IMAX films, InPark's Senior Correspondent Joe Kleiman would expand his childhood loves into two decades as a projectionist and theater director within the giant screen industry. In addition to his work in commercial and museum operations, Joe has volunteered his time to animal husbandry at leading facilities in California and Texas and has played a leading management role for a number of performing arts companies. Joe previously served as News Editor and has remained a contributing author to InPark Magazine since 2011. HIs writing has also appeared in Sound & Communications, LF Examiner, Jim Hill Media, The Planetarian, Behind the Thrills, and MiceChat His blog, ThemedReality.com takes an unconventional look at the attractions industry. Follow on twitter @ThemesRenewed Joe lives in Sacramento, California with his wife, dog, and a ghost.
Share
Facebook
Twitter
Linkedin
Email
Print
WhatsApp
Pinterest
ReddIt
Tumblr
Previous articlePHOTOS: Sheikh Zayed Heritage Festival
Next articleParques Reunidos Announces 7% Increase in Revenue For First Quarter