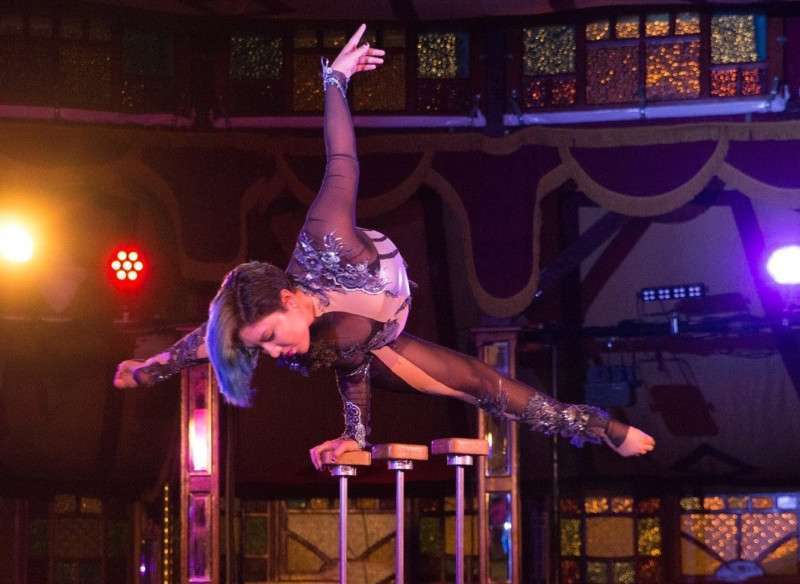 Bringing the unique and extraordinary to the stages of Silver Dollar City, The Festival Of Wonder opened April 11 at the 1880s theme park with larger-than-life performances and acts of curiosity.   Designed as “A Most Amazing Entertainment Experience,” the festival features performances that are as unexpected as they are entertaining, from a harp that spans the entire length of a theater to athletes performing flips and flying stunts on pogo sticks.

“It’s extremely challenging finding just the right acts for this festival,” shares Rex Burdette, Silver Dollar City Entertainment & Events Manager, who has been booking acts at the park for over 25 years.  “It’s basically a huge treasure hunt, looking for each special act that sets itself apart with unusual twists to the ‘expected spectacular,’ making it show-stopping extraordinary.”

Featuring entertainment from all over the world, the festival brings NEW acts including CirqUnique, showcasing an out-of-this-world contortionist from Asia; the DiabloDiva juggler, whose circus performing family has been astounding audiences throughout Europe for seven generations; a fire juggler with multiple Guinness world records; a slack wire artist from Russia performing unbelievable acrobatic feats on a loose high wire; and an extreme pole-balancing duo with an act that features a bicyclist riding upside down.   Other new acts prepared to thrill are the X-Pogo Stuntmen, the world’s most extreme Pogo performance team based in the US, holding 13 Guinness World Records for incredible Pogo stunts incorporating jumps and flips nine feet in the air; world-renowned illusionist Canadian Vitaly Beckman with illusions unlike any other; and mandolin virtuoso Radim Zenkl, originally from the Czech Republic and a former US National Mandolin Champion, whose performances include a variety of instruments from a 6-foot long Slovakian flute to an Australian didgeridoo.

Returning favorites include the Earth Harp Collective, featuring the world’s largest playable stringed instrument, with 75-foot strings stretching the length of the theater, plus a new 9-foot orb covered in drumheads and other unique musical instruments by visionary William Close; and Speed Painting by Paint Jam of Texas, featuring top speed performance art.  Unique culinary dishes served up in Foods of Wonder complete the festival experience.

The festival concludes an exciting spring season along with the opening of the new ride Time Traveler, the World’s Fastest, Steepest and Tallest Complete-Circuit Spinning Roller Coaster.  At an investment of $26 million, this is Silver Dollar City’s biggest attraction ever, introducing a new generation of thrill coasters for families.

Joe Kleimanhttp://www.themedreality.com
Raised in San Diego on theme parks, zoos, and IMAX films, Joe Kleiman would expand his childhood loves into two decades as a projectionist and theater director within the giant screen industry. In addition to his work in commercial and museum operations, Joe has volunteered his time to animal husbandry at leading facilities in California and Texas and has played a leading management role for a number of performing arts companies. Joe has been News Editor and contributing author to InPark Magazine since 2011. HIs writing has also appeared in Sound & Communications, LF Examiner, Jim Hill Media, and MiceChat. His blog, ThemedReality.com takes an unconventional look at the attractions industry. Follow on twitter @themedreality Joe lives in Sacramento, California with his fiancé, two dogs, and a ghost.
Share
Facebook
Twitter
Linkedin
Email
Print
WhatsApp
Pinterest
ReddIt
Tumblr
Previous articleTriotech Celebrates 45th Installation in Middle East
Next articleCisco to Provide Latest Technology Innovations to Expo 2020 Dubai as Official Digital Network Partner